SNOWSHOE, W.Va.- Snowshoe President and COO Bill Rock was honored with a 2009 West Virginia Tourism Star of the Industry award during the annual Governor’s Conference on Tourism, held Sept 21 at Snowshoe Mountain Resort. Bill was honored as Tourism Professional of the Year, receiving his award alongside other standout tourism personalities and organizations from the state of West Virginia at a luncheon hosted by Governor Joe Manchin.

“The Stars of the Industry awards showcase the dedication and enthusiasm of the go-getters in West Virginia’s tourism industry,” Gov. Manchin said during the award luncheon. “I applaud their efforts and appreciate the hard work they continue to do making our state a world-class travel destination.” 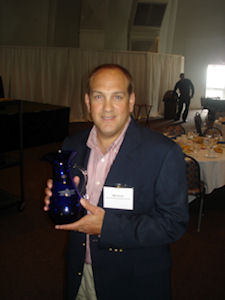 his tenure. Under Bill’s direction, Snowshoe was named the Southeast’s No. 1 Ski Resort by the readers of Ski Magazine, and the resort had its most successful season ever in 2006-07. Throughout his time at the resort, Bill has exceeded financial goals and key indictors of the resort’s success, including guest experience and employee satisfaction. In July 2007, Bill was promoted from Vice President and General Manager to his current role as President and Chief Operating Officer.

Bill was also applauded for his work in the community. He currently volunteers as president of the Snowshoe Foundation, a private, nonprofit organization that has given nearly $500,000 to worthy causes in the three counties surrounding Snowshoe Mountain.
“I’m honored to accept this award in recognition of the achievements of our team at Snowshoe,” Rock said. “It is a privilege to work with such talented and dedicated people that provide exceptional experiences for our guests.”

Bill began his work in the ski industry as Director of Marketing and Sales at Bristol Mountain, N.Y., before rapidly rising in rank at Intrawest resort Stratton Mountain in Vermont. Prior to his appointment at Snowshoe, he served as Chief Operating Officer/General Manager of Durango Mountain Resort in Colorado