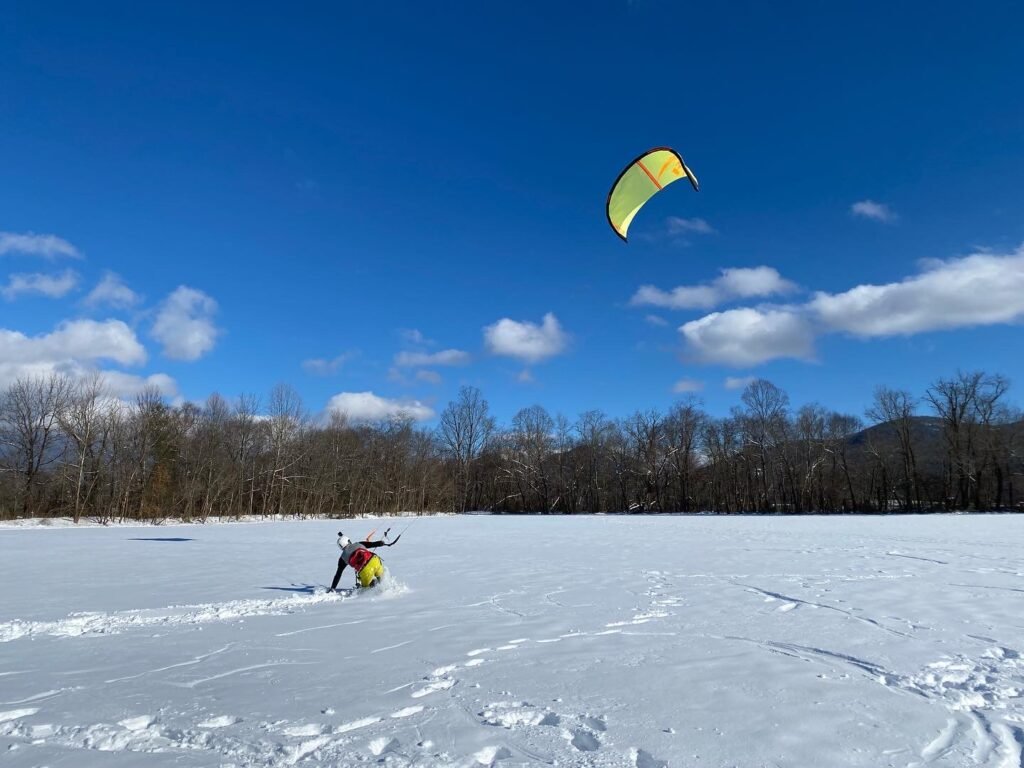 The fall out from Winter Storm Izzy was fantastic . . .  a hearty W.O.W. ‘Wonderland of Winter’ nearly enveloped the entire region. Even Jim Cantore made an appearance in the Tarheel state, with less than expected power outages, than ‘ole Jim would have even forecasted. Most of WNC saw just shy of a foot with some higher elevations seeing 12+ inches.

Let’s rehash some fun times in the last couple of days, before more good weather news!

It was a steady 20-25mph wind on Monday as the Northwest flow wrapped-around, bringing clearing skies with scattered flurries. This was the ideal wind to launch a 12-meter kite.

The winter version of kiteboarding/kitesurfing is all the rage, and great for Ski Southeast(erners) who don’t have access to a lift or mountains, nearby. In fact, the latest forecasting of (incoming) Winter Storm Jasper is targeting the Coastal Carolinas where it MIGHT be possible to do a kite-surf-and-turf!

Mid-morning, as the snow just began to warm and soften a bit, I knew it would be PRIME boot-packing conditions. For about an hour (and 20,000 steps later), I marched with skis-on to make a compacted and firm skate-skiing loop around the house. Classic skiing is usually (99% of the time) the right tool for the job, but grooming a skate-ski track takes a whole other level of craziness to build-out.

It’s a short loop, but it is paying off because it has been possible to ski on the last couple of early mornings. The snow stays firm and doesn’t degrade with every kick-step. There are a couple of nordic ski races on the books this winter, and it’s super nice to train on ACTUAL snow, versus rollerski pavement . . . cringe/ouch!

Wednesday, January 19th: A Big Day in the Mountains near Beech Gap

I got back into the mountains as the secondary roads began to clear-up, but before the dreaded ‘under-developed snow’ began to kick-start the melting process above 5000′. It started with some ice climbing on some big routes along NC 215 . . . the “ice palace” of North Carolina. Ice is a bit more fickle than snow . . . so that’s always first on my hit-list. Got an early start, soloed some pillars, and rappelled down.

The bigger and more ski-related objective was to skin-up and ski-down from Devils Courthouse. If you’ve never been, it’s a magnificent rock wall where, “Cherokee lore had been reported to state that Judaculla, a slant-eyed giant, dwells in the cave of Devil’s Courthouse.”

The snow stays shaded in the ascent/descent off the Blue Ridge Parkway . . . A fun objective with awesome views from the top!

Over the years, Thursday evenings on the slopes have begun to take on a theme . . . Race Leagues!

Beech (sponsored by your very own SkiSoutheast!), Cataloochee, and Ober all host a Thursday night race league with varying race formats. This is a fantastic way to rediscover your local mountain, or, better yet, sample all three of them. I hope to get out to a couple of races this winter.

For the near-term (now thru Thursday, January 26th) check out Brad P.’s latest forecast. He outlines some wintry precip tonight/tomorrow depending on your locale.

Beyond that, the resort skiing looks exceptional as cold temps are going to infiltrate the region for primo snow-making opportunities.

F.Y.I. Speaking of resort skiing, just “know before you go” . . . many resorts are beginning to sell out of lift tickets during high volume periods (i.e. weekends, etc.). I know it would be a downer if ya jumped in the car and drove up to the mountain before researching the mountain beforehand.

See you on the mountain!