The alarm went off an hour earlier than usual, and I felt like the ‘living-dead’ on the morning of Sunday, March 14th. It was ‘Spring Ahead’, and given the fact that I was traveling to the very western-edge of the Eastern Time Zone, the sun wouldn’t rise until just before 8am.

I had to shake myself awake, because the first event of the Annual Ober Gatlinburg Spring Fling, was about to go-off at 9am. 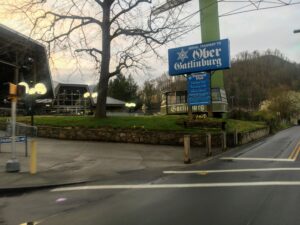 The event started off with bang. Some of you might be wondering, what is this new age sport? Here is a primer on the sport from the International SkiMo Federation (It’s a lil’ intense, but does give a representation of what the higher-echelon of the sport is like):

Our race was a bit more mellow, but still embodied the characteristics of this rapidly growing adventure-sport. I didn’t get a count of all the participants at the start of the race, but it was a great group for a first annual event! Here is the start of our race:

The race began with a mass start up Castle Run, took a left-turn up Grizzly, and continued onto Ober Chute to the top. From there you transition (take off your skins) and fly down (intermediate) Ober Chute, to (advanced) Mogul Ridge . . . that was just the first lap. Each subsequent lap went up Grizzly and down Mogul Ridge. I managed to complete 9 laps total in roughly 90 minutes, for the win! 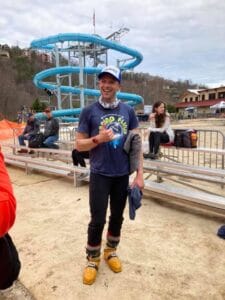 The event was a huge success, and I met some really cool ‘like-minded’ fellas . . . Many of them were on ski patrol (thanks for your service, guys). Looking forward to another rip next year.

I re-grouped in my truck, and switched-out to the snowboard. It was time for the premier event of the day. The first guy on the pond skim is always the guinea pig, and this time it was none other than the Ober Gatlinburg marketing manager . . . Tom. He gave it a great run, and allowed everyone to see how much speed was needed. I went about a half a dozen times, and a couple of them were switch (opposite your normal stance). I saw many folks take the “Polar Plunge” and the crowd at the bottom was a hoot!

Time to get your jump on . . . From 4-5pm the high ollie comp was set-up along (easy) Ski School, right in front a building crowd. The format was simple: two attempts per bar height. The bar would raise until there was just one person left. Skiers and Snowboarders were clumped into the same event, which made the field even bigger.

The bar was raised about a half a dozen times. This whittled down the competition to a young buck . . . and myself. Here is my second place run:

I couldn’t quite clear the highest bar, but it was still really fun. There is another High Ollie Comp at App in a couple of weeks. Looking forward to this and the rest of the events (i.e. Pond Skim 2.0, and a Chinese Downhill a.k.a. A Downhill Race w/ a Mass Start where Jungle Rules ensue!)

I’m off to Snowshoe this Saturday for their second-to-last weekend of the year. I haven’t been to the ‘Shoe yet this year, and I’m absolutely brimming with excitement. Spring conditions are in order, and the MAJORITY of the runs should be open. Cheat Mountain might even have a little bit of mixed precip in the next 48 hours, to freshen things up. Who knows, maybe I’ll catch a glimpse of that elusive Snowshoe Hare. Stay tuned!

Beyond that, I’m headed to the Meltdown games at Appalachian Ski Mountain the following Sunday, March 28th, to close out their season. App always has a one of the most substantial base-depths of any resort in the Southeast, in which they can capitalize-on at the very end of the year.