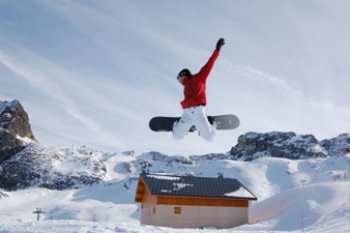 The History of Snowboarding is long and could be vast if you included the numerous sledding-while-standing apparatuses that inventors have tinkered with over the decades. Most people do not count these types of inventions; however, each contributed greatly to the widespread popularity of the sport. It was not until 1965, when Sherman Poppen, a chemical engineer in Muskegon, invented the "Snurfer" for his daughter, that the sport would begin to take shape. Here we will go over a Short History of Snowboarding for those that are new to the sport. 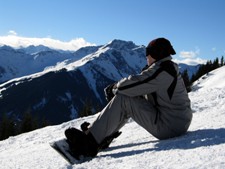 Poppen took two skis and fastened them together with a rope. While on a Snurfer, the rider could use the rope, which went around the nose of the skis, to stable him- or herself. After the Snurfer gained in popularity—Poppen’s daughter’s friends all wanted one—Poppen licensed his new idea to a wholesale manufacturer. By 1966, over half a million Snurfers had been sold, but the new phenomenon in snow toys only appealed to young children. During this time, Poppen was trying to generate excitement for his new invention and was staging and allowing competitions to be held all over the U.S. Jake Burton, an avid skier and snow lover that eventually went on to found Burton Snowboards, took notice and became interested in the new snow toy.

After Burton injured his collarbone and gave up skiing competitively, he began playing around on the Snurfer and even took part in a competition or two. Around this time, Dimitreije Milovich began making snowboards. Milovich came up with the concept after sledding down hills on cafeteria plates in college. Realizing that the budding sport was really no different than surfing on the snow, Milovich based the engineering of his new boards on that which is used by surfboards. In 1972, Milovich founded his new company, which created the boards, and called it Winterstick. After creating the company, Milovich received tons of press in publications such as Newsweek, Playboy and the winter sport magazine Powder.

In 1977, Jake Burton, just out of college, set out to create a better, badder Snurfer and started fashioning boards from laminated hardwood. He would take his creations to the Snurfing competitions and, at and infamous one, wowed the audience by winning the competition with a board he had created with bindings. Bindings proved to be a crucial element of the invention: they allowed riders to better handle the boards and steady themselves. Others continued to produce variations of the Snurfer during this time.

In 1980, the first official snowboard (that contained all of the technology and engineering that today’s snowboards have) was created by Burton. In 1982, the first national snowboarding competition was held in Vermont in Suicide Six. Riders risked all while boarding down a steep, icy slope called "The Face." Three years later, a survey revealed that only thirty-nine out of the more than six hundred ski areas allowed snowboards at their resorts; this same year the publication that is known today as the International Snowboarding Magazine began under the name Absolutely Radical. It was not until about a decade later, in 1994, that the International Snowboard Association came about.
Once the International Snowboard Association got its footing, the sport expanded and transformed into a mega hit. Since then, other organizations have come about, including the United States of America Snowboard Association which regulates the rules and instructional guidelines of the sport. There are now numerous international snowboarding competitions. In 1998, the sport of snowboarding finally gained legitimacy as a winter sport when officials allowed snowboarding competitions to take place at the Nagano Winter Olympics. While Snowboarding in the Olympics might seem commonplace today, that day in 1998 was a monumental day in the History of Snowboarding, and contributed greatly to many resorts deciding to allow snowboarding as a sport.