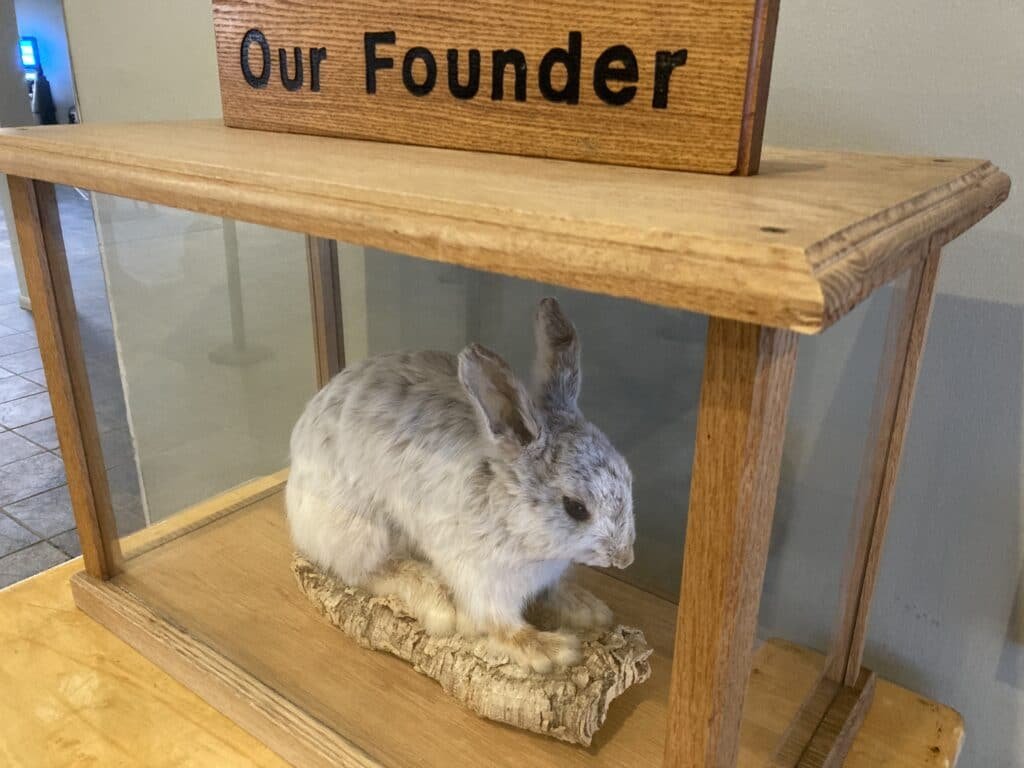 Speaking of beating heart, when you walk inside to check-in, the very first thing you see is a taxidermy Snowshoe Hare.

In the last decade that I’ve been making frequent pilgrimages to Snowshoe, I’ve NEVER seen the elusive Snowshoe Hare. Maybe it’s because the hare camouflages itself (white in the winter and rusty-brown in the summer). After all, it’s even camouflaged into every bit of signage throughout the entire village.

Feeling like I had seen a spirit animal, I knew that it was going to be a great trip after seeing the lucky rabbit.

My last visit to the ‘Shoe was late-March of 2021 . . . At that time, I took a picture of the backcountry trails signage. This year, when planning some new adventures, I was surprised to see a new web of trails called “The Fingers”, near the village.

These look to be purpose-built cross-country mountain bike trails, but can easily double as cross-country ski trails and are very accessible from North Mountain. It’s no suprise . . . while Alterra (parent company of Snowshoe Mountain) hasn’t released any recent snowsport master plans, in 2019 they did announce, “increasing its investment in mountain biking, constructing new bike trails and features at Snowshoe, which is consistently ranked among the top mountain biking destinations in the region”. We are starting to see that capital investment take shape, which is positively influencing snowsport, in this case.

When I arrived on Saturday in the late-afternoon, I stopped by this trail system to get a look, en-route to Silver Creek. There was enough snow to stride-and-glide on the (main) snow-drifted Powderpuff trail, but it was a little thin in the woods to explore “The Fingers”. I’ll be sure to check it out next time, and report back. Better yet, take a peek next time you wander north from the village. 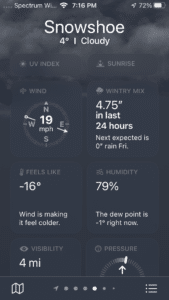 I snapped this screenshot at 7:16pm on Saturday evening, and it felt every bit as cold as -16F with the wind chill. World Cup and Winter Olympic committees cancel races at -16F, which left me wondering what I was doing outside in those temps. I had a plan though . . . I was going to partake in the, new, option to skin-up Silver Creek to stay warm, versus riding-up the bone-chilling lifts.

The place was virtually empty and you can just hear the wind ripping through the microphone!

After a couple of runs, I was doneski.

When I woke-up, well-rested, I had the crazy-ambitious goal of skiing (or riding) every lift-served run at Snowshoe (in a day).  I made rope-drop and started the mission on a cruisy set of skis. The temps were hovering around 8 degrees, with the wind chill pushing the mercury below zero. I knew that I could only do a few runs before having to warm up, inside.

Chilling temps, and the trickery of keeping track of every nuanced-run, made it feel like I bit-off more than I could chew. Ultimately, I didn’t quite meet the goal, but I did have a heck of a fun time, trying! From rope-drop to ripping-groomers, powder, park laps on ski/board . . . Springtime at the ‘Shoe is a sheer delight.

After Snowshoe closes for the day, Silver Creek is just waking up. Just to the southwest of Silver Creek, I’ve been eyeing two meadows for sometime now. The one on the right is a landing strip with an access road to the airstrip. These meadows really come into view while riding the Western Express Quad Chairlift, as you come up from the bottom of the Western Territory. Look to your left while riding that chairlift next time.

With just six or seven inches of new snow, I knew it was going to be just too thin to ski down. BUT, skinning uphill doesn’t require as much snow. Ultimately, you’re not knifing-in your edges, and the skins protect your ski-base from any rocks, roots, or undue gouges.

My plan was to start/finish at the junction where Snowshoe Drive intersects with Silver Creek Rd (there is parking at Old Spruce Brewing for an après beer!). I skinned-up the south facing Airport Rd. for about a mile, and reached the meadow at an altitude of 4805′ . . . The views from the top are gorgeous. Toward the end of the ski-tour you enter into an enchantingly deep spruce-fir forest. As you traverse the summit for the last quarter-mile, I thought I saw some animal tracks and stopped to take a couple of photos.

What is really cool is that this backcountry trail dumps you out at the top of Flying Eagle lift. I got some lift-served laps on (advanced) Bear Claw and (advanced) Flying Eagle. After a romping day, I finished out with the (intermediate) Buck Saw, (easy) Knife Blade, and (easy) Can’t Hook combo run back to the base of Silver Creek. Taking the quick shuttle trip back to the Old Spruce Brewing was a jiff, and I finished-off the day with a fresh beer 😉

It felt as though I had just finished a European ski tour where you can ski up-and-down, from one destination to another, and let your imagination run wild. Mega Days at Snowshoe. I sure hope you have as much fun, this upcoming weekend, as I did. See you on the mountain.