The Learn A Snow Sport Month, started last year by a group of industry officials, encourages children and adults to try a snow sport if they never have done so and also encourage those already involved to try a new snow sport. You can find out more about the program by going to www.learnasnowsport.org  and there is plenty of information there for everyone to take in.

Annually the state’s five resorts, Canaan Valley and Timberline in Tucker County, Oglebay Resort in Ohio County, Snowshoe Mountain in Pocahontas County and Winterplace in Raleigh County, experience over 800,000 skier visits. The economic impact from the five-month long industry is over $250 million, employing 5,000. 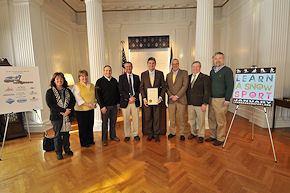 The 2009-2010 season is off to a great start for West Virginia’s resorts with large amounts of natural snow and large holiday crowds. “We have received over six feet of snow since the first of December and that has help create awesome first of the year conditions on the slopes,” says Terry Pfeiffer, President of the West Virginia Ski Areas Association and Winterplace Ski Resort.

“The recent Christmas and New Years holidays were great for of the resorts, with many experiencing record visits.” Over 250,000 skier visits occurred in West Virginia during the holiday period.

To find out more about West Virginia programs go to www.goskiwv.com and click on a resort link.