They were not 100% officially as it turned out but between skiing open and less then open trees at Timberline; and with a wink and a nod skiing everywhere at Canaan — it felt like 99%

But I started at icy and wind swept conditions at Wintergreen– Instead of Driving straight up to the Canaan Valley (WV) I decided to leave at 5 am and ski Wintergreen with a friend who is a killer snowboarder. Morning conditions were brutal and the mountain remained more icy then I have ever seen it. I went down twice on the same elbow—Some typical blue scrape on the back of every rise. 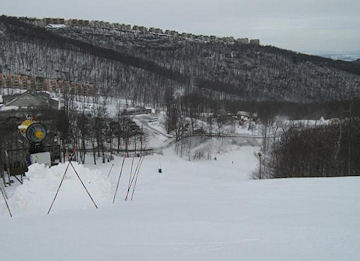 It sucked despite the fact that we all grinned and said "well at least its all open" However the view was awesome and there were runs that gathered blown off snow on their edges. Met Ski26er by chance on the lift — sporting a SKINC sticker; everyone should get one early and often. 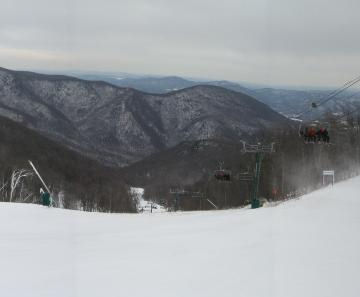 Day 2 – Off to Timberline
So 4:30 I drove into WV on 33 out of Harrisonburg — a nasty drive around 8 o’clock. Destination was the Purple Fiddle thanks to a tip from Messageboard user Pagamony.  $20 per night per bed — there were no people there aside from some very nice people who worked there and a couple of semi-permanent residents. It is a weird and funky flophouse/hostel above a music/cafe/bar that is fairly renowned both regionally and nationally (the music venue, not the flophouse) and a view of my back-up lodging (thank God I didn’t have to use it) .

Out the door in the morning to Head to Timberline, when we got there, there were no crowds and great coverage but were blowing snow, had a lot closed, and had almost everything aggressively groomed despite the storm.

I was the first down the drop because it was not groomed but then again does natural coverage on top of a series of whalebacks really count as fresh? Fun yes, but….

…bitterness was setting in as the snow kept falling and the groomers and blowers kept running — BUT then I found the TREES….

…..and when you begin to ski trees it is hard to stop, while getting first tracks on front yards and gardens on the left-hand side of the mountain I got more inventive until I got Cliffed/Roaded out above the tunnel– scary times; my career as a tree-skier nearly cut short beneath the wheels of a rented Hummer.No lines and the snow continued to fall — by the end of the day what they had groomed in the wee hours had 6-8 inches of cushion. 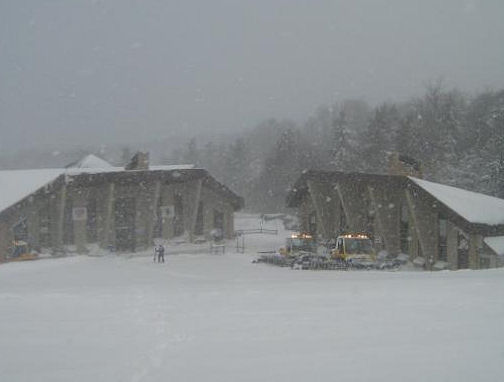 basis for the trip — I spent only 3 hours but they were spectacular. I had an early chair on an empty lift but there was a patroller behind me, he asked how are you, fine, etc. — and I asked him where I should hit my first runs: probably Dark Side of the Moon, I said except I hate how it flats out …

"Oh no, that whole side’s closed now"
"But it was opened this weekend?"
"Yeah but they shut it so they can blow snow at the top. MAYBE it will open open this afternoon."
"I’m driving back to North Carolina at noon; dang I’ll miss it, with all this snow."

Then after a pause I heard five of the sweetest words in the english language: "Well, I’ll tell you what…,"

…so he suggested I go with him to clear the closed run under the second lift and at the top said you hit it first I’ll be right behind you. At the bottom he made some suggestions about places that gather the most powder at the opposite side. "That is if you decided to go there, which I am not saying you should" This was a great experience for me and I appreciate this guy stepping out of his role to help out on a powderday.  So later, yeah I ducked the rope, a lot, these runs were some of the best I’ve ever had. (the early runs in the trees at T-line were also right up there) Its like finding gold when you get something like this in our corner of the world.