It’s 33° with a wintry mix falling at daybreak Sunday morning in the North Carolina mountains. Colder air arrives overnight, Sunday night with snow showers developing before sunrise Monday. Snow showers and flurries will continue through much of the daytime Monday. Accumulations should be light- with a dusting to 1″ for most of the region, but 1″-3″ along the western escarpment, and highest elevations might get more. we repeat this mix, rain, snow shower scenario late Wednesday night through Thursday.

With temperatures hovering at or above freezing in the North Carolina mountains, I witnessed NO snowmaking at any of the six NC ski areas. Even so, Appalachian Ski Mountain is 100% open. Beech Mountain Resort is open with all trails except the old Oz Run (now called “West Bowl” and Crossway (the connector trail that runs across from Upper Shawneehaw to Robbins Run to Southern Star and Upper White Lightning.

Cataloochee Ski Mountain was a notch milder this morning at 40°, but they have all but three slopes open. I watched Chris Bates doing his morning grooming run as the sun came up. Sapphire Valley Resort is 100% open with both trails. At 37° already this morning, there WILL be some soft snow runs over there. Sugar Mountain Resort is operating with 15 of 21 slopes. While Tom Terrific is open, I’m pretty sure that there’s been no Boulder Dash, Whoopdedoo or Terrain Park runs this season. Still, all ski areas, not named Wolf Ridge, looked darn good for Sunday. (Has Wolf had anything other than the four lower mountain, green trails open this season?)

Wisp Resort was making snow this morning and at 25° they are some 7° colder than the NC mountains (usual as that is) and that allowed for some sweet snowmaking.

I watched as three Piston Bully’s worked the snow at Snowshoe Mountain in tandem this morning. They were leaving a wake of pure corduroy behind them!

All of the ski areas in West Virginia made snow overnight with the exception of Winterplace which was hovering painfully just over the wet-bulb temperature needed to make snow. They are 31° this morning, and with the humidity, they are just out of the range needed.

Canaan Valley Resort made snow is is open with 14 of 47 slopes and trails today.

Snowshoe Mountain is playing on 53 slopes and trails (of 61) and they are expecting more snow. The good news is that by tomorrow they should have several inches of fresh snow to enjoy! The bad news – this system is predicted to start as freezing rain this morning before transitioning to snow this evening. Fingers crossed for the Cheat Mountain Magic to bring them some snow instead! Expect impacts to their high-speed lift operations (Ballhooter, Western, & Soaring Eagle) if icing does occur today.

Winterplace Resort is open with 24 of 29 slopes and trails, snowtubing and more.

Timberline Mountain is open with 19 of 20 trails until 8pm Sunday.

As we visited the Virginia is for Lovers ski resorts this morning, Mother Nature WAS loving on both Massanutten Resort and Wintergreen Resort as they were able to make snow.

Ober Mountain was not able to make snow but they ARE open with 5 of 10 slopes for today.

Joe Stevens texted me on Saturday as he was prepping for his Snow News is Good News post this morning. I know he is sharing some input on the issues that ski areas are having this season in hiring staff. That said, as I was looking around this morning I did notice several ski areas posting messages on their websites and on Social Media looking for help. Massanutten posted this in RED…

Interested in working at Massanutten? Employment comes with free skiing and more! They shared:

Grab your skis and join us for an environment of fun while you work! Hiring for part time, full time, or seasonal positions – All positions come with competitive rates, a season pass, and resort benefits – no experience necessary!

We are an authentic, independent, and unconditionally awesome mountain resort surrounded by endless opportunities for job seekers and adventurers – the only place where you can clock into fun!

We are gearing up for winter, hope you are excited! Ski season runs from December to March.

Bear in mind that it is ALMOST February now and they are still in need of human beings to staff positions! This is happening all over the region. I saw numerous ski areas in the Southeast and mid-Atlantic looking for help…to no avail. I can’t wait to read Joe’s post. Certainly, the hospitality industry as a whole has suffered from the national labor shortage.

I’ve personally read where everything from covid to baby boomers retiring to the majority of young people saying low pay (63%) and being disrespected at work (57%) as reasons that they quit and are not working.

I have received an inordinate number of emails about Wolf Ridge this season. Most simply ask questions like:

Why is Wolf Laurel (former name) not even trying to make snow at the top? Very disappointed.

After below zero temperatures and about five inches of real snow, Wolf Ridge is only making snow at the bottom. I left after two runs down those easy greens. What gives?

Haven’t blown snow up top all season. In spite of cold stretches and all other ski resorts in WNC making snow. It is SAD. I paid for a season pass for this?

Joshua Capps posted on Facebook, “Wolf could be so much more but Orville doesn’t care about it other than a tax write off.”

By the way, that last comment was made ON Wolf Ridge’s Facebook page with nobody caring to respond or delete the message.

Joe Berry responded, “He never recovered from the recession in 09. Everything is on the verge of repossession. That’s why there’s no backside. He won’t pay anything so he can’t hire anybody to blow snow at night. That’s why. It’s literally so bad and I feel for them cause this is the best mountain it just needs a whoop ton of money and it could be better then anywhere else. New lifts new snowmaking a bar! It could make this place the next snowshoe. He has the best mountain around! It could be something else!”

All of these comments and nobody at Wolf cares to reply or delete???

Man, I remember when SkiWolfLaurel.com was boasting TWO ski lodges, the Lodge Steak & Rib Restaurant. They expanded from 15 trails to 23 slopes with slope access up top. All of that has slowly evaporated like the fog.

Wolf had a run of horror for a few years and now they can’t keep 5 slopes open. It’s a shame, but the 2008 financial crash and some really bad luck did them in and they’ve never recovered. Orville also allowed some not-so-reliable people to potentially buy the place…without buying the place…or without any money…and the next thing we all read was that fires destroyed the place…all the way back to only having the original lodge and 15 slopes.

The ski industry is (unfortunately) prone to gossip spreading and all too often that gossip isn’t accurate. However, it is very obvious that Wolf Ridge is being operated on less that a shoestring budget. No funds are being spent on “image things” like a decent website, webcam(s), snowmaking or staff. Their staff is also talking and that doesn’t help defray the gossip trail.

All I can add this morning is that at 10:30am there is not ONE soul on the chairlift (that is running) and not one person on the snow that we can see.

Speaking of the past…anyone remember these from Wolf? Click to Enlarge. (That tunnel slope is no longer open and the lodge was destroyed by fire.) The ski map below was an impressive improvement that lasted a few blinks of an eye. 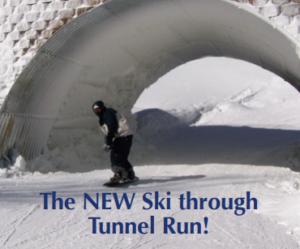 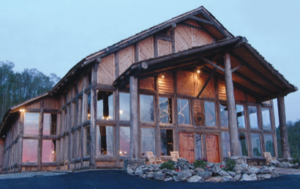 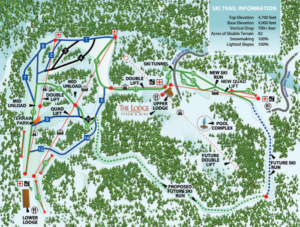 Also, you have to click to download the old brochure from 2010, but they had 23 exciting runs, 8 lifts, two full service ski lodges and 36 slope side cabin rental units. They improved the Breakaway ski through tunnel slope by widening the main slope run and adding two breakout ski trails.

All gone within a year or two from that “announcement”. 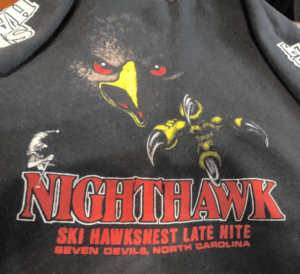 Does ANYONE remember “Nighthawk” at Hawksnest?

I miss that place. Good times.

I know that I speak for thousands of fans in saying that it would not hurt my feelings at all if Chip Perfect or someone like Chip Perfect came in and purchased Wolf and/or Hawksnest and returned those hills to their glory years.