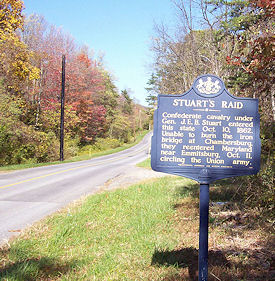 Whitetail is near the intersection of I81 and I70 and not as far north as it feels!

Fantastic! Two weeks of superb weather, and two weeks of perfect fall festivals for two Snow Time Resorts, Liberty and Whitetail. Whitetail is also in Pennsylvania, just a few miles north of the Mason-Dixon line. If you take the Clear Spring, Maryland exit from I-70, you drive up scenic Blair Valley and as you enter Pennsylvania you learn that JEB Stuart’s Raiders took this route 150 years ago. Over the next rise the wide, steep, sweeping runs of Whitetail loom ahead. Whitetail is one of the newer ski areas in the mid-Atlantic (at 20 years old) and has a distinctly Western feel. 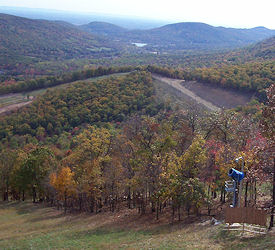 Whitetail’s high-speed quad lifts and broad, long runs can easily handle lots of people without the feeling of being crowded or spending more time in lift lines than on the trails. It has a vertical drop of 935 feet, with 23 trails, snowparks, and tubing. 32% of the trails are listed as easier; 45% more difficult, and 23% most difficult. For the second year in a row, Whitetail has cut a new trail, again an “advanced beginner” run, the 1800 foot long “Ledgewood.” It is cut through the forest facing the valley and balancing last year’s half-mile “Sidewinder.” Both are served by the EZ Rider quad lift.

Along with the other SnowTime resorts (Liberty and Roundtop), Whitetail hopes to open the first week in December, but that was hard to envision this weekend with the 10th annual Great Outdoors festival bathed in 70 degree sunshine. 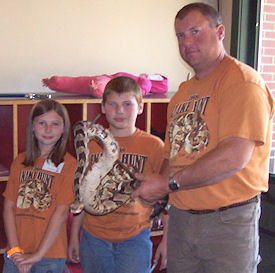 <Hannah, Russell, and Bill Wheeler of Keystone Reptiles. This timber rattler is from South Carolina

One of our yearly favorites was indoors – the snakes brought by the Keystone Reptile Club, displayed this year by the Wheeler family, recently featured on TV. Can you imagine their family at Christmas? “Mommy, may I have a new snake?”  Some of the rattlers and copperheads are native to the area; most are from southern states. Thankfully, all the snakes sleep during ski season! Outside, the air was filled with traditional and modern mountain music of “Fox Hunt”, recently featured on public radio’s West Virginia Mountain Stage. The next day The Davisson Brothers were scheduled to play. Another unique activity is demonstrations by the Penn State Woodsmen; their team t-shirts say Kiss My Axe! One of the new activities this year was an adult pumpkin pie eating contest. Charles entered before learning that he had to keep his hands behind his back! Also outdoors were a variety of demonstrations and activities for kids and adults including fly fishing casting clinics, a falconry exhibit, a kids obstacle course and hay maze, and tours of the snowmaking facilities. Many of the activities benefit local churches or civic groups. It really is a great community event. Again, we are thrilled to see many of the friends were have known for several years. These events also bring home another important point – the ski areas provide needed employment and revenue to the regions. The further developments – real estate, golf courses, and stores, would not be possible without the ski resorts. They have used natural resources responsibly –protecting the nearby Indian Springs Wildlife Refuge and the historic and rustic character of the Blair Valley. It is a win-win situation for all, especially in these difficult economic times.

Also new this year are 18 energy efficient TechnoAlpin snowmaking fan guns in case we don’t get a repeat of last year’s blizzards. 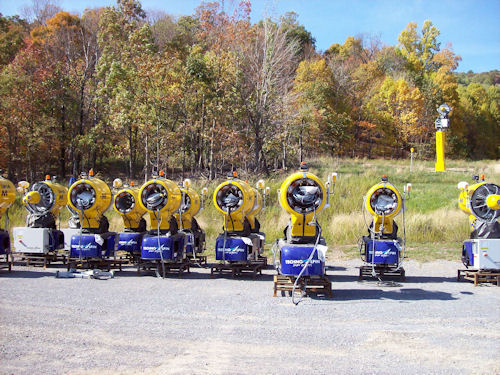 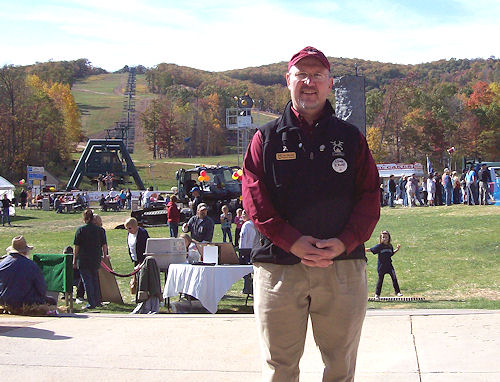 Previous Post
Premier Vacation Rentals
Next Post
October Festivals are in the Past! Snowmaking will begin this Week!