We’re Talking Percentages Today. How Much of the Season is Gone? What Percentage of Trails are Open? …and more. 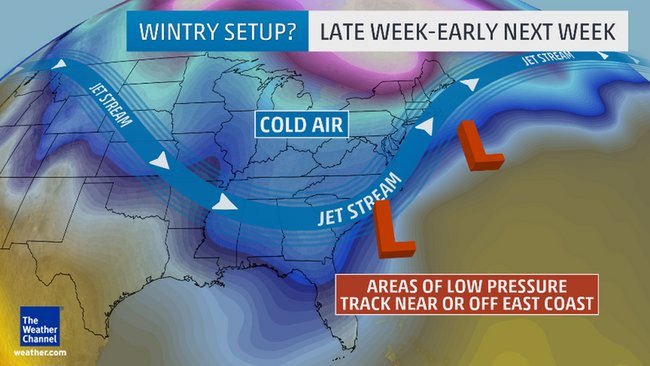 First off I HAVE to mention that it is COLD out and about, no matter which ski area you call your favorite. Lots of snow making happened over the last 24 hours with every resort making from 3-8″ of snow. Several resorts have decided that they have so much snow on the slopes that they will NOT make snow during open hours today.

Base depths are being reported in the 30-80″ range.  So the damage that two days of heavy rain did early in the week is already a distant memory. All of the Maryland, West Virginia, and Virginia ski resorts saw from a DUSTING to an inch of natural snow over the last 24 hours…and everybody is excited about next week’s predicted two rounds of heavy snow that is reportedly heading our way.

They’ve downgraded the amount of snow as of today with perhaps 3-6″ of snow for the High Country and perhaps more into West Virginia. We’ll have to wait and see, but SNOW is SNOW, right?

So visitors to our ski areas this weekend will enjoy pristine slope conditions and very nice weather.

Some ski areas are also promoting the fact that there will be NO snowmaking during open sessions today.

Now to the “Math” Portion of our Saturday Post….

I’ll start with the number 53.5%. That is the point that we are at right now in the 2015-2016 ski and snowboarding season. The season traditionally begins on Thanksgiving Day and continues until USUALLY the last weekend in March or the first weekend in April (weather permitting). With that in mind, February 6th constitutes the 67th day of what we are HOPING will be a 135 day season.

Of course some ski areas will close up around the second or third week of March…but there is no question that Sugar Mountain, Cataloochee, Wisp and some others will keep the season “alive” until April 3rd or so. So we’re around the 55% mark on the season and that leaves us with a lot of good days on the snow left to be enjoyed.

Now we’ll share the slopes open at each ski area and list them in the order of highest percentage of slopes open. Today, we’ll begin with a resort that we haven’t had a lot of opportunities to brag on.

Also, SEVERAL ski areas shared some nice videos during the last few days and we thought we’d include some of those as well. Enjoy! 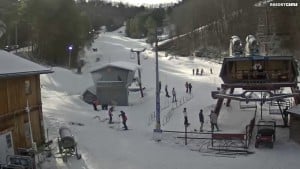 Click to enlarge! A great view of Wolf this morning!

Wolf Ridge Resort – 100% OPEN with all 15 trails and after making snow overnight they have decided to turn the snowguns off for the day. They also announced that THE BOWL is reopening.

Winterplace Resort – 100% OPEN with all 27 trails. They made snow overnight but they are promoting NO snowmaking today.

Wintergreen Resort – 100% OPEN with all 24 trails. We enjoyed their “Mountain Minute” video so we wanted to share that with you guys here.

Massanutten Resort – 100% OPEN with all 14 trails and 14 lanes of snow tubing as well. Snowmaking resumed last night and will continue as temperatures allow. Highs are expected to get into the upper 30s and maybe low 40s so the snowguns will turn off at some point today.

Bryce Resort – 100% OPEN with all 8 trails. Despite the 22° temp it doesn’t appear that Bryce is making snow this morning. Visit the Lions grilling operation on Saturday and Sunday at the foot of the ski slope to help support local area scholarships and charities.

Cataloochee Ski Area – 100% OPEN with all 18 trails. Cat added 6-8″ of manmade snow in the last 24 hours which will make for awesome weekend skiing and snowboarding.

Appalachian Ski Mountain – 100% OPEN with all 12 trails, including multiple terrain parks loaded with great options. App is reporting 8″ of “new snow” today after reporting “2” yesterday. To be clear, that is NOT natural snow that they are reporting. They are posting “new manmade snow” these days. With a base of 38-63″ we’re not sure why they’ve resorted to doing that as it’s a bit misleading. Over the past few months I have received emails like this one:

“i noticed that it’s been snowier at app than most of the other nc resorts. how much snow have they had this year? i saw 6″ three days in a row last week. why aren’t ya’ll reporting that?”

That is because it isn’t natural snow. Appalachian has seen 16″ of natural snow this season.

Sugar Mountain Resort – 100% OPEN with all 21 trails. They are reporting 3-4″ of new, manmade snow in the last 24 hours. No Snowmaking during daytime hours.

Beech Mountain Resort – 93.3% OPEN with 14 of 15 trails. Only one not open is the “Crossway Trail” which is the rarely used connector from Upper Shawneehaw to Lower Robin’s Run.

Snowshoe Mountain – 88.3% OPEN with 54 of 60 trails. All of the popular trails are open. We HAVE to share this awesome video that Snowshoe put together right after 36″ of snow fell from Winter Storm Jonas. We think that you’ll enjoy the full production! Check it:

Canaan Valley Resort – 40.4% OPEN with 19 of 47 trails open and snow tubing and ice skating. They are making snow and will open more terrain especially with heavy snow in the forecast. David Lesher reported another .2″ of snowfall in the last 24 hours to give them 54.1″ on the season.

Sapphire Valley Resort – 100% OPEN with BOTH of their 2 trails and snow tubing.

That will do it for me. Enjoy your day and…

Previous Post
Midweek Skiing=Snow, Solitude and Savings!
Next Post
It’s Super Bowl Sunday and it Should Be a Super Day to be on the Slopes!