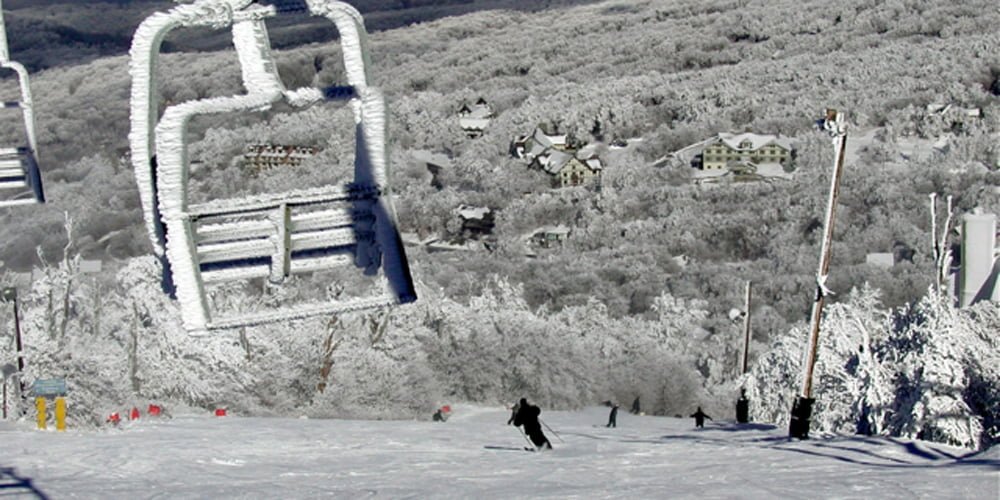 As all you weekend skiers read the great weekend ski prognosis on SkiSoutheast.com—snap out of it and realize how much better midweek skiing is going to be next week.

Too many Southern skiers simply forget the truth of the above headline. That hit me last night at the Pedalin’ Pig barbecue near Sugar Mountain. After some rain, snowmaking was again blanketing the slopes.

The young family gobbling ‘cue was here to ski or board so I asked, “How was skiing?” The father said, “We just got here. We’re skiing tomorrow.”

Bingo. They’re out there today, Friday. After a frigid night of snowmaking, they have super conditions and are skiing right up to an empty lift under blue skies. They’re also paying discount rates instead of top dollar. Smart people. Tomorrow, weekenders could be lock-stepping in a lift line and dodging crowds.

Let’s take a deep breath. It’s early February—and the best conditions of the ski season happen over the next six or so weeks—less than a third of that time is over a weekend! Plan now to ski midweek! Whether you warn the boss you may suddenly take a few days off when it snows, or just choose a window and go for it, try the South’s smartest ski strategy.

Ski weekends, if that’s all you can do. But with improving access roads bringing so many people closer to Southern slopes, midweek skiing is easier than ever.

Want powder? Head up just before a snowstorm is predicted, like all those smiling people a few weeks ago checking in to Canaan Valley State Park Lodge on a Thursday before the big snow. (The weekenders never got there!) Or aim for a particularly long period of great snowmaking weather.

Lift rates drop dramatically midweek (as much as 50% at Ski Beech, for instance). Similar cuts chop the price of ski lessons, a critical factor in the fun of skiing. Lodging rates drop as much as 40% during the week—and package prices can be laughably low.

So who the heck started the rumor skiing in the South wasn’t worth a few vacation days? Whoever it was, they’re wrong.

That family I met last night are realizing just how wrong.

When they told me they were skiing today, I said, “Congratulations!” Dad looked at me quizzically and asked, “What do you mean?”

“Well,” I said glancing at the kids, “your parents are smart. The snow will be perfect and you’ll have it all to yourselves.” The parents beamed as their boys cast them appreciative looks.

This article started today on Friday, but let’s end the article three days from now on Monday when three days of snowfall are predicted to start in Banner Elk.

Monday morning, some smart family, a couple of friends, or a lucky local ski writer, are gonna walk up to Sugar’s Summit Express and be the first and maybe only people “in line.”

I guarantee there will be a smile on my face. And it’ll all happen after all those weekend skiers have just gone home. Unless a few of them call in sick. Think snow.

Previous Post
It is SNOWING HARD in Some Locations. Check out ResortCams.com!
Next Post
We’re Talking Percentages Today. How Much of the Season is Gone? What Percentage of Trails are Open? …and more.