It’s Super Bowl Sunday and it Should Be a Super Day to be on the Slopes! 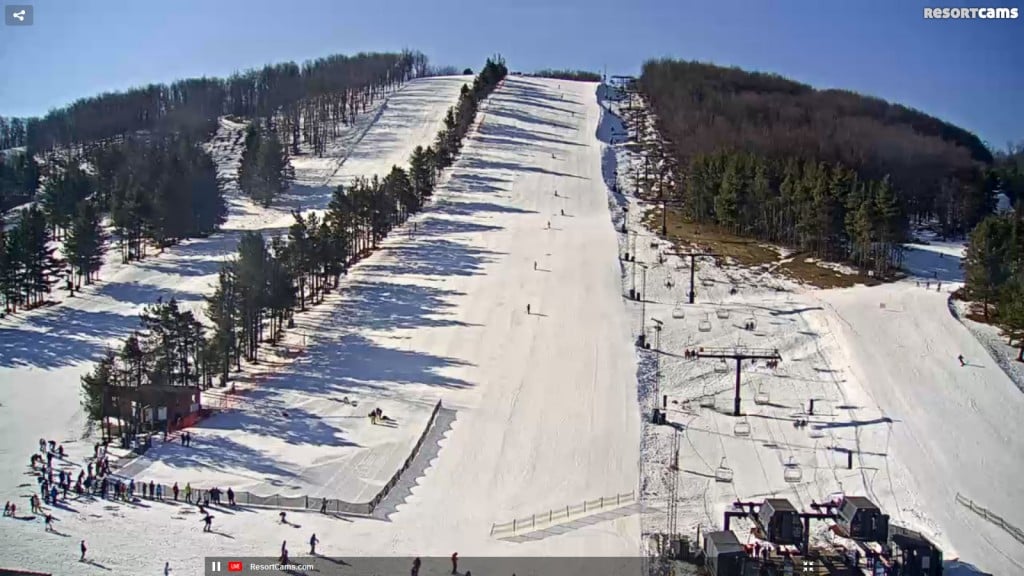 Today will be a fun day ESPECIALLY if you can play on the slopes a bit before this evening’s big game. Several of the resorts are hosting Super Bowl viewing parties so if you’re thinking that you might have to choose between playing on the slopes and watching the Super Bowl – you CAN have them both. The slopes are really pretty awesome right now and Sundays offer a bit less crowded trails so if you’re thinking about traveling up for the day, be sure to check out the individual resort websites to see which ones are offering Super Bowl viewing opportunities…IF that is your thing.

I’m a “Carolina Guy”. I was born and raised one. However in this particular case MY Carolina colors are South Carolina Gamecock garnet and black. I am really, really, really pulling against the Panthers tonight. All of my family are Panther crazy. I even purchased three Panther shirts from Dick’s Sporting Goods on Saturday to give to members of my family who will be watching the game tonight and pulling for the Blue and Black.

I really like their coach, Ron Rivera. I appreciate the drive and talent – and really like – Greg Olsen, Luke Kuechly, and Josh Norman. I wish I was Cam Newton’s agent because that is one talented human being. He is a great looking young man with a smile that is off the charts. His physical abilities are seemingly limitless as he appears to be a “man among men” on a football field. His passes have vapor trails behind them. He MIGHT BE Superman. I just don’t like it that HE calls himself that more than anyone else.

If I was FORCED to bet money on this game, I would HAVE to place my hard-earned money on the Carolina Panthers to win, because I think they have the best talent and they simply have a vibe that seems unstoppable this season.

However on this particular Super Bowl Sunday I am hoping that the Denver Broncos put Cam Newton on his butt and keep him there all game long. I think there’s a chance that the Panthers will win this game in lopsided fashion. I’m hoping for the reverse of that. I don’t like Cam Newton for the same reasons that I don’t like Johnny Maziel.

So today I will be pulling for the class QB of the NFL to go out winning one more Super Bowl. I’m hopeful that he’ll hang up his cleats after this game. So for me…it’s the Denver Broncos and Peyton Manning for today.

…Oh…and the reason I’m bringing ALL of this up on a SKI WEBSITE? Because I can.

An Awesome Sunday for Skiing and Snowboarding. 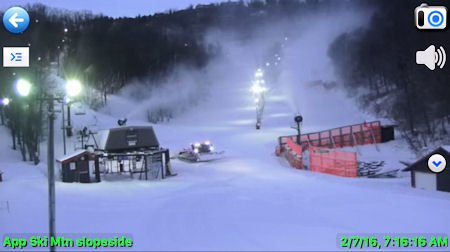 Appalachian Ski Mountain was among the resorts that were bombing the slopes with manmade snow this morning! Notice the groomer as well!

Sunday will be an awesome day on the slopes as snowmaking happened overnight at most of the ski areas. I witnessed the “Storm before the Storm” at several ski areas this morning – via the webcams. I also caught several groomers doing their thing this morning to prepare some nice corduroy.

If you are fortunate enough to get on the slopes today, it WILL be a nice one. Once done, head into the resort bar, pub or whatever and enjoy the game. It SHOULD be a good game and here’s to hoping one more time that the Broncos win it.

Speaking of “The Storm before the Storm”… 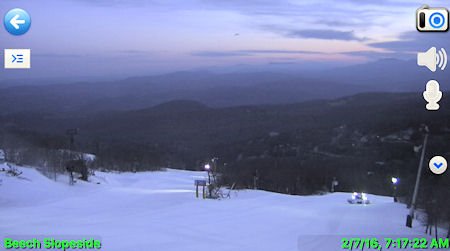 Beech Mountain’s Upper Shawneehaw gets a “comb job” this morning!

Snowmaking crews put down more manmade powder at many ski areas and you can see evidence of that (and where) on the SNOW REPORT. I was watching a manmade blizzard happening at Appalachian Ski Mountain as the sun was coming up this morning and that made me hop over to several of my weather resources to see that the NWS seems to be wavering on whether or not this next system of snow storms will produce just 3-4″ or perhaps a foot of new snow Monday-Thursday of this week. 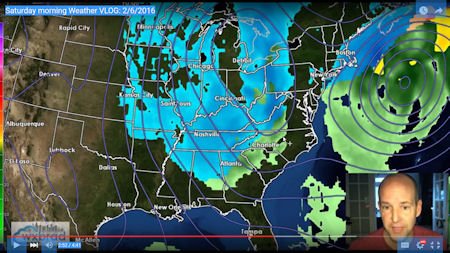 The ingredients are there. Will they come together?

Right now – it DOES appear that the NC mountains could see 4-8″ of snow, while the higher elevations of Virginia may only see 3-4″. Snow-prone West Virginia is kind of “mum” on the amount of snow to fall, but it looks like around a foot or so could/should blanket the slopes into the Mountaineer state.

So with the forecast for this week looking very cold and snowy – NOW is the time to book those reservations and head to your favorite ski hill!

Remember that SOME of the ski areas only operate for DAY SESSIONS on Sundays, so check the SNOW REPORT to make sure if your favorite is operating for this evening.

NO SNOW FELL IN THE LAST 24 HOURS…except at Sapphire and Appalachian???

Over the last couple of days I have alluded to some emails that I have received from readers commenting on how much snow fell at Appalachian and Sapphire Valley over the last few days.

One reader – who is a huge fan of one of the resorts – wrote:

“I don’t get what the fuss is about. What’s the harm if one place reports things their way? They spend a lot of money to make that snow. They might as well report it.” 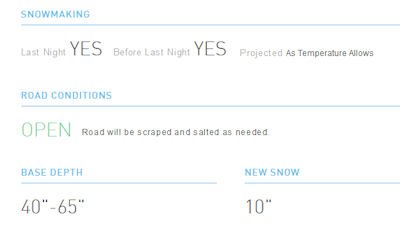 Oh brother. This is one crazy world that we’re living in these days. Using that logic, I should be able to say that 2+2=5…simply because that’s my right to do so.

My issue with the way that Sapphire and App are reporting manmade snow as SNOWFALL is pretty simple. People OFF the mountain want to travel to the mountains to see snow. When they see “NEW SNOW – 10” they think they are going to drive up and see nearly a foot of snow on the ground. They are envisioning great powder skiing – YES – but they are also thinking of making a snowman with the kids or sledding, etc. 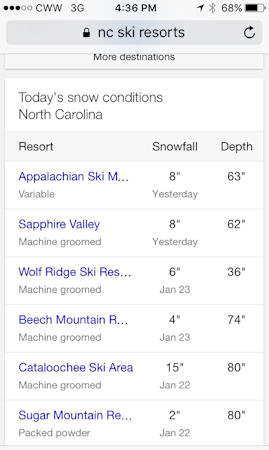 The second reason I have an issue with it is that no other ski resorts are reporting manmade snow as “NEW SNOW” or “SNOWFALL”. I think that snow reporting almost HAS to be uniform.

The LAST and MOST IMPORTANT reason that I have an issue with this is because GOOGLE, YAHOO and NUMEROUS national reporting services are picking this reported “snowfall” or “new snow” as SNOW…period.

One of our readers alerted me to this fact as they wrote:

Hi Mike. I saw your story today and it made me google the snow conditions and to my surprise I witnessed what you were saying. Sapphire and App reported 8″ of snow yesterday. I think I’m heading up to play in all that snowfall. [insert sarcasm]

Unfortunately this reader is correct in that many of the national reporting services simply pick up the number on the ski area’s snow reports and then call it “SNOWFALL”.

Hopefully Appalachian and Sapphire will move away from this practice. Truth is I’m not sure why they both began doing it this season. If you want to report the amount of manmade snow as a marketing thing, label the column, “New Manmade Snow” or “Machine Made Snow”.

Actually I don’t take meds of any kind, but I guess I needed to make the point that I totally realize that I’m ranting about things that might be rather mundane to many of you. Regardless, in the interest of fairness I feel that all resorts need to be equitably reported on.

One to two inches of REAL SNOW is in the forecast DAILY starting sometime on Monday and lasting into Wednesday to Friday across the region. We’re certain that Kenny Griffin and meteorologist Brad Panovich will weigh in on an pattern changes for the winter weather headed our way. On Saturday morning Brad posted his VLOG and that setup LOOKS like it could go REALLY SNOWY. We’ll see…

A Nice Video of Timberline Resort…

This nice video was posted a few days ago by the WV Tourism peeps with a promotion that they call “Road Trippin”. It’s a great video and if you have not been to Timberline Resort…this video will make you ready to pack up and head to Tucker County, WV. Check it out:

I guess that’s it for me for today. Head to the slopes. Go Broncos. I had to…

Enjoy your day and THINK SNOW! THINK COLD! Email me anytime and about anything at: [email protected]m

Previous Post
We’re Talking Percentages Today. How Much of the Season is Gone? What Percentage of Trails are Open? …and more.
Next Post
A Good Looking Week Lies Ahead