Hello again skiers and riders of the Southeast!

For those of you who love quotes from historical figures, I got this title from the Austrian neurologist and creator of psychoanalysis, Sigmund Freud.  Seems as though he spent some time with these majestic creatures and concluded that they are indeed worth experiencing in some capacity.

Don’t blink too much now, but we are roughly halfway through this 2021-2022 winter adventure already. Kind of hard to imagine that concept given that January is when this season has finally felt worthwhile, but each day is simply ticking it away.

If you have one of them Kit-cat clocks you most certainly can feel its eyes eerily watching the season count down.

Speaking of cats, I was able to make some laps at our very own Cataloochee Ski Area near Maggie Valley, NC this past weekend, and I was not alone.  There were so many Jack Frost lovers up there enjoying the recent snow cover from earlier in the week, and the crowd size seemed to keep increasing as the sun drawn shadows kept moving on by.

Atypical from most experiences, but given that it was dressed in white, this is not surprising. 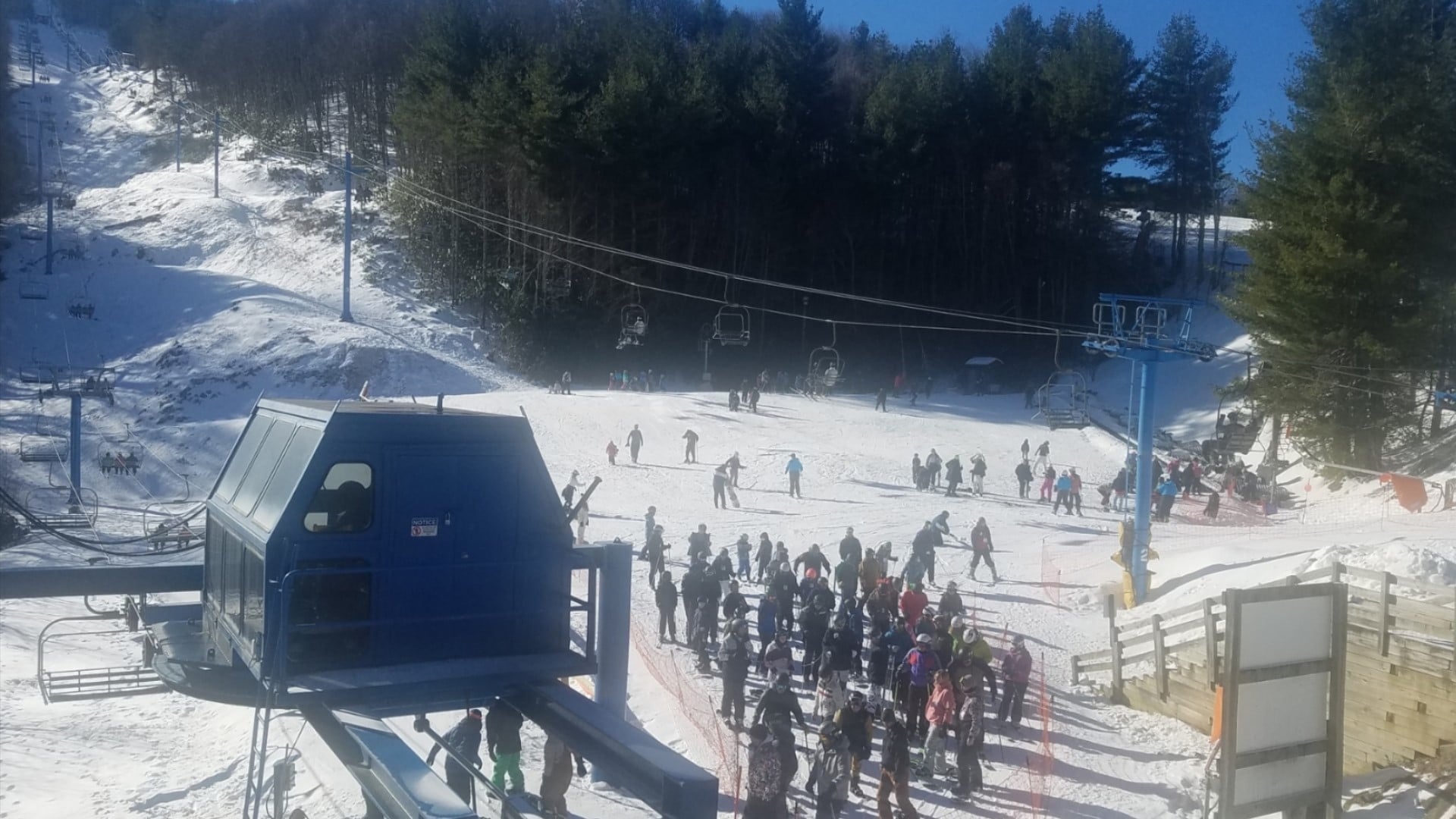 And much like our feline friends, this place was groomed, tidy, and purring.

From the moment of arrival all the way to the first chair lift ride up, there was no confusion about where to go in order to get whatever your objective was.  I got to give a bravo to the parking lot attendants and the lift ticket scanners for being able to direct the masses appropriately, efficiently, and quickly.  Anytime there is a failure in getting people to move along there is always a risk of catastrophe.

Even in the midst of crowd chaos they were able to get everyone going in an orderly manner.  It is true that there were wait times to ride the lifts, but on average it fell somewhere between five and ten minutes.

The only exception was fifteen minutes and that was due to a need for the lift to stop while people received assistance.  If you are a weekend warrior you already know that wait times are a thing, but these moments are minimal when compared to other places in other regions nearby.

Once ascending to 5,400 feet we all received a treat in the form of a 100% open resort riding on a base of 36” to 48” with eighteen trails and all five lifts spinning.  However, this cat is not sleepy like you would expect, but instead is roaring to play from 9 AM to 10 PM each day.  Being awake much more than the average domestic also means you have plenty of opportunity to get multiple runs in. 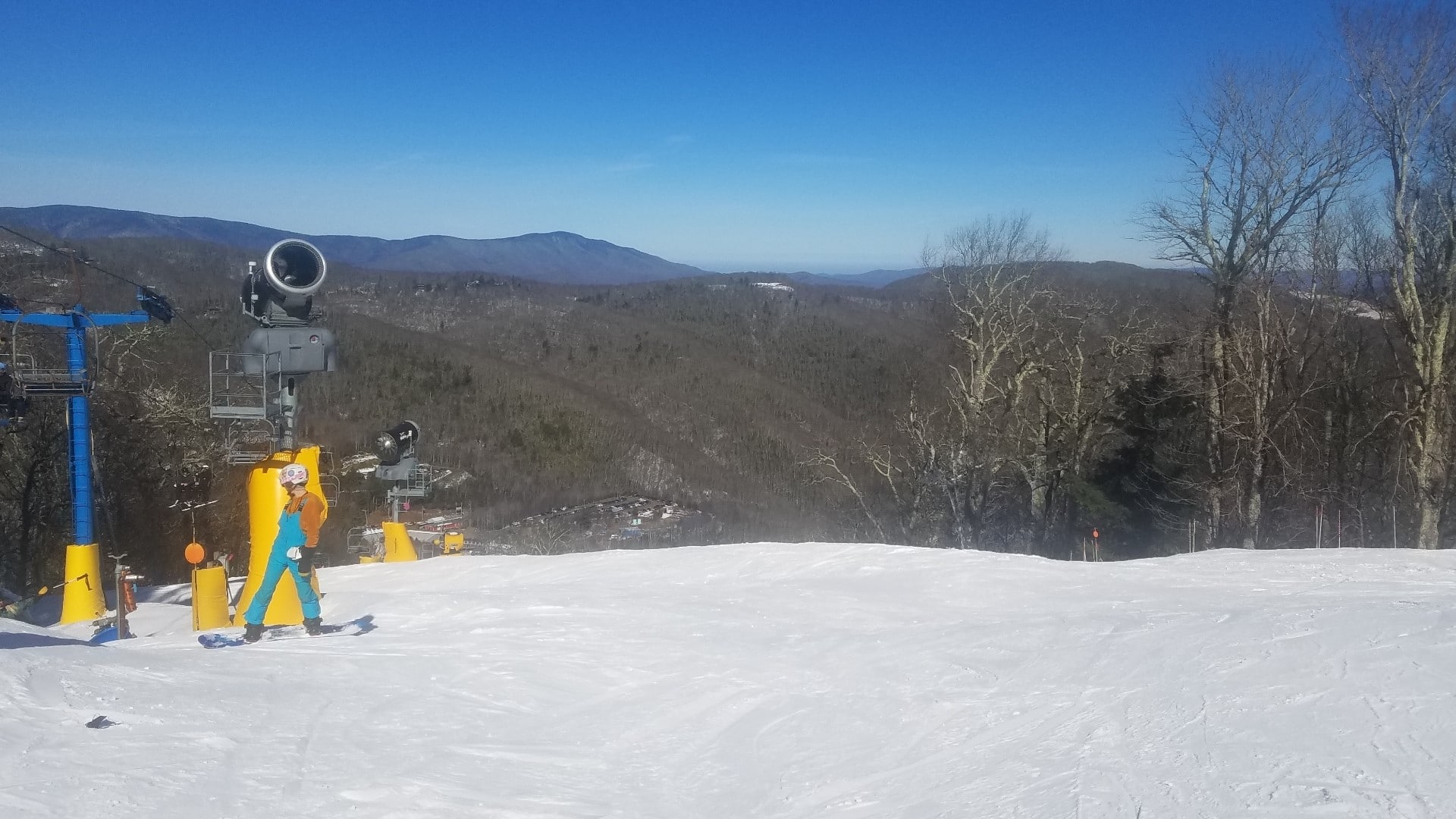 Much like a set of whiskers though, the conditions were sensitive to the touch.  While a majority of the slopes had their winter coat on, there lay a layer of ice underneath in certain locations. This was most prevalent on the top half of the terrain, and the largest spots were at the beginning of the Upper Snowbird run right below the Omigosh Lift and another berg waited on the turn from Upper to Lower Snowbird.

I normally would recommend getting your edges sharpened, but even the gnarliest cat claws would have struggled to get a solid grip on this when passing by. Unfortunately, multiple people beefed it to the chagrin of spectators on the lifts above, and some of them appeared to be hard hitting impacts.  Please do yourself a favor and keep the pace in control at these tighter crossroads so as to avoid a cataclysm.

Afterall, you do not have nine lives to rely on.

However, a vast majority of this place is silky smooth and playful.  The overall conditions were great for this time of year, and they did not have a need to fire up the snow guns while open.  If you are a fan of skiing through the trees you can do that now.  I found that the section immediately to the skiers left from the top of the Omigosh lift was a bit of tight squeeze with a thin base layer, but nonetheless skiable.  The more spaced-out Wildcat Glade area was a terrific opportunity to showcase your skills, as there were many people bobbing and weaving their way through it.  If you liked to launch yourself to the Cat Cage Terrain Park and take to the air or a rail for some fun. 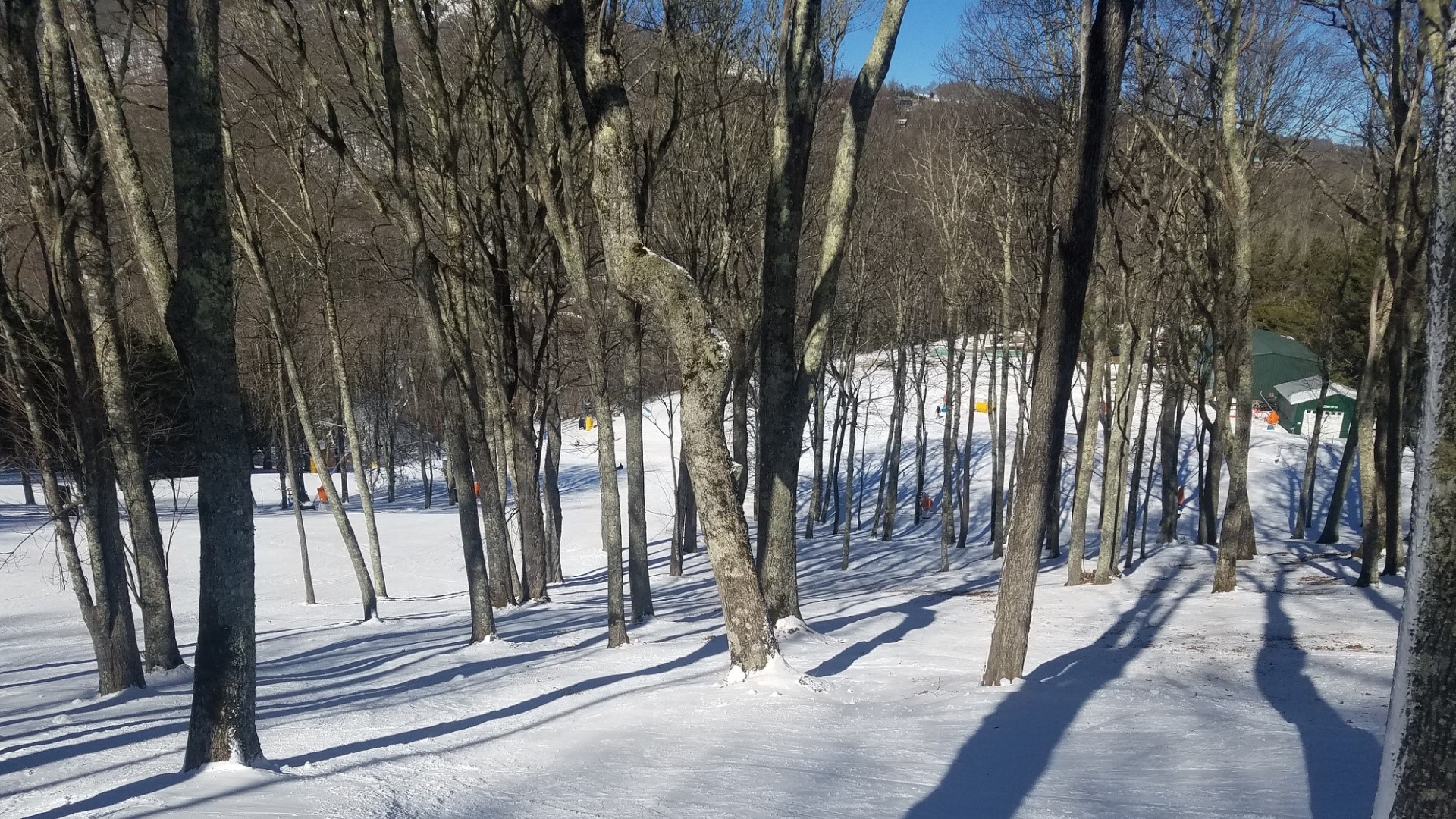 On the bottom half of the mountain, and in particular on Turkey Trot and Lower Omigosh, the snow was softer and easier to carve on.  No bare spots or ice to report whatsoever.  This is also where the bulk of the crowd was, so please go about it carefully so as to avoid colliding into others.  I observed a mother get taken out by her own son, and she has some good words to warm him for the future.

Luckily there were no major injuries, but nonetheless it had to have been an experience nobody desires.

At some point you may need to take a quick break, and when that happens you are always met with an accommodating staff that can take care of your needs very well.  The food was hot, and the drinks were cold, so it was a good mix of fuel no matter how you chose to go about it.

Please note that due to recent Covid-19 surges they had to remove seating spaces inside the dining area but had tables waiting outside in the sunshine that were vacant. 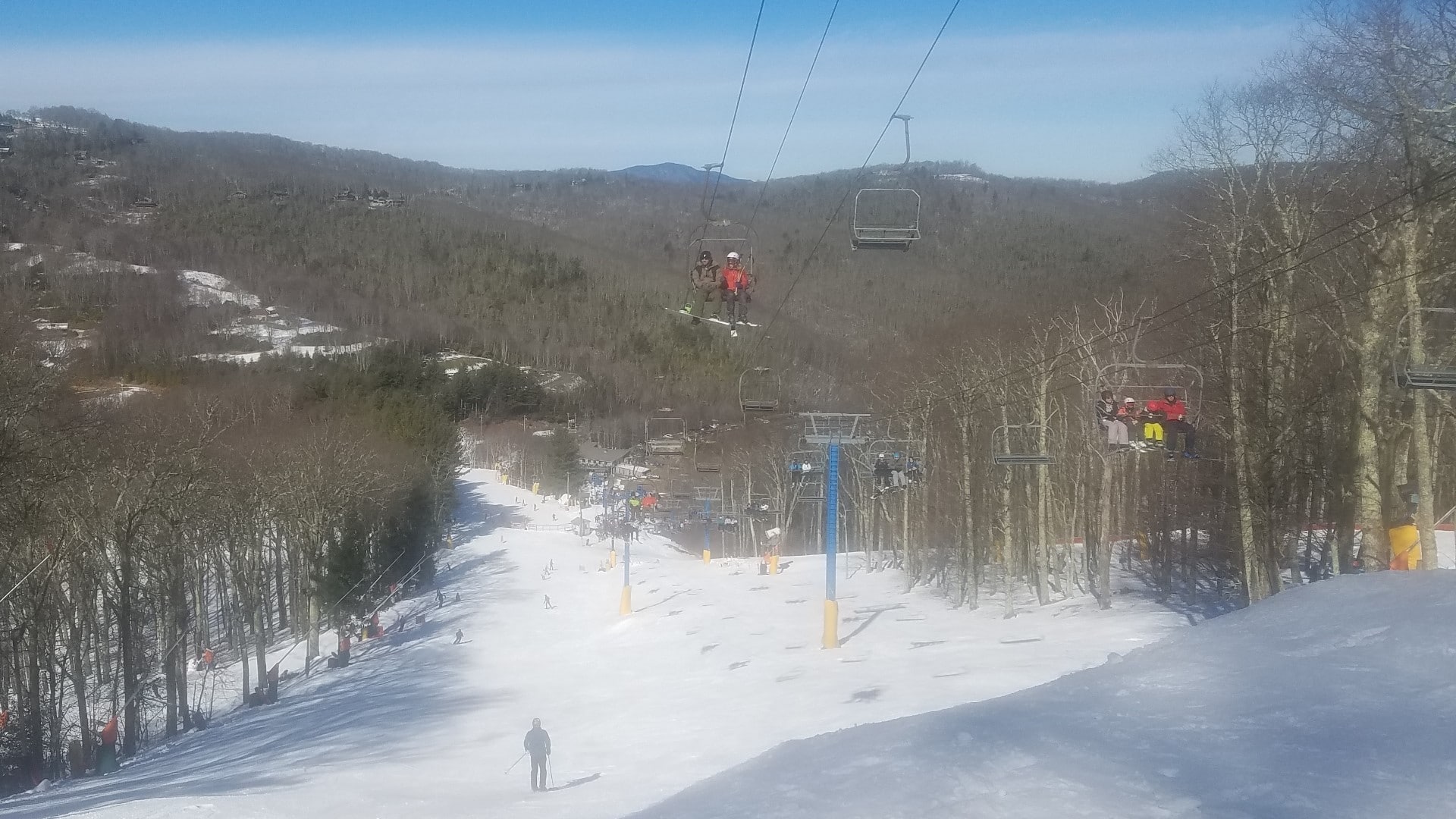 Other than the expected quad and calf burn that comes with making turns, there is another time where your legs might get some extra sensations, and those are on the hikes to and from the parking lot.  I arrived around 10 AM and that was too late for a spot in the closer lot near the base lodge.  So uphill I parked, and then trekked downhill to the base, followed by that last uphill retreat while calling it a day.

Throughout all of this I was thankful for a piece of ski gear that cushioned the walk and made clunking around in ski boots so much easier.  I am talking about Cat Tracks, which are portable and detachable rubber soles that you manually apply to the bottom of your ski boots.

Local ski shops and online retailers have them ranging in cost from roughly $17 to $35, but they are absolutely worth every penny.  On top of a softer feeling while walking, they also protect them from wear and tear that concrete, gravel, and other hard surfaces can provide.  Sorry snowboarders, but you’re all set already and do not need this.  This is a skier only thing.

Anyways, if you are looking for purrfect opportunity to get out of your town and into ski country, give Cataloochee a consideration.  They are less than an hour away from Asheville with fantastic views along the route.

The whole experience can be catatonic at very random moments for tiny fractions of a second, and that is simply because your senses get overwhelmed with the amazement.  Your body will also get jolted by everything it will take in.

So, whether you are seeking a quiet meow or a loud growl, you will come out of it feeling independent, pristine, and ready for a good nap. 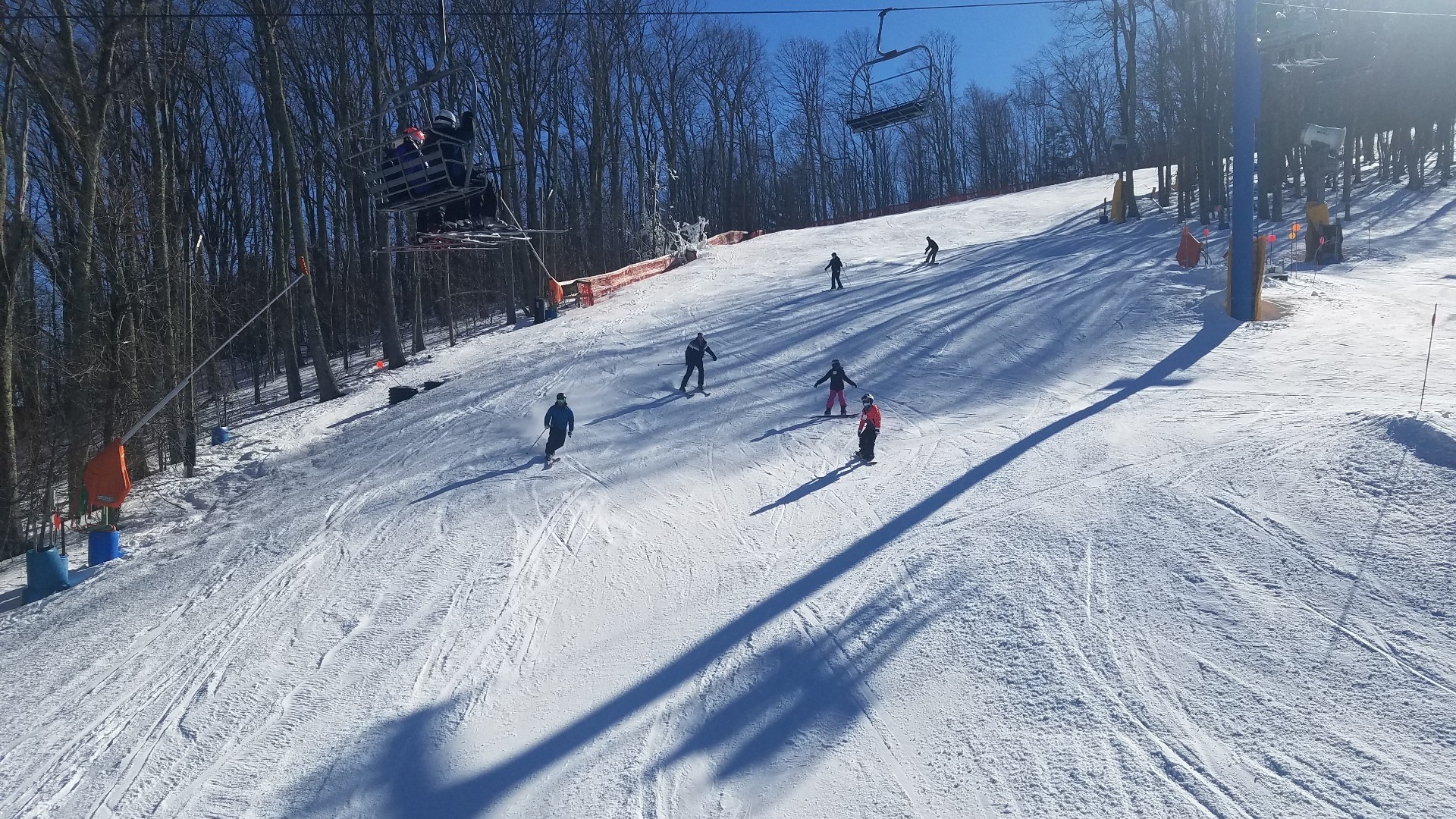