Timberline Detour before heading to the Snowshoe Summit on March 5th

With the annual SkiSoutheast Summit approaching, the thought of skiing Timberline once again entered my mind. I had never skied Timberline, but have always heard good things about the resort located in the Canaan Valley. Dave suggested that we make a detour to ski Timberline for a day on the way to Snowshoe. With that suggestion, Dave (Teledave), Logan (skiatlanta), and I (MBlacky1051) started making plans to ski Timberline. Dave was the only person in our group who had skied there before, and he always had very good things to say about the resort. I looked at their trail map and noticed they had a lot of expert terrain, probably the most of any ski resort in the Southeast, as well as the longest run (Salamander) in the Southeast. Timberline has received over 250 inches of snow this year and will surpass their record before the end of the season.

We drove through the night from Knoxville to reach Timberline in 7 hours. The drive was very easy, 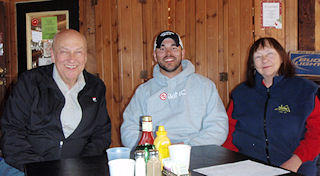 mostly interstate and divided highways until we reached Elkins. I thought the drive would be much more difficult than it really was. Come to find out, Timberline is located fairly close to all major Southeast, Mid-Atlantic, and Midwest cities. We arrived at 7am in the Timberline parking lot, just as the staff was arriving to open the resort for the day. Dave spoke to Darr from the ticket office at Timberline, telling her we were from SkiSoutheast and had driven through the night from Knoxville to ski that day. The next thing I know, we are being offered a place to sleep in the Timberline offices until the lifts start running. None of us were able to fall asleep because we were excited about skiing that day, so we ate breakfast in the restaurant at the top of the lodge. Eating breakfast at the table next to us was the co-owner and President of Timberline, Doc (Fred) Reichle and Rosemarie (above picture). They were very excited to know that some SkiSoutheast members were there to visit their resort. They were very friendly and knowledgeable, suggesting to us runs to ski first thing in the morning and asking us how our trip from Knoxville was. We hadn’t even made a single run yet, and already were sold on Timberline. The staff was hands down the friendliest I have ever encountered at a ski area in my life, and I have skied at more than 50 different resorts across the country. 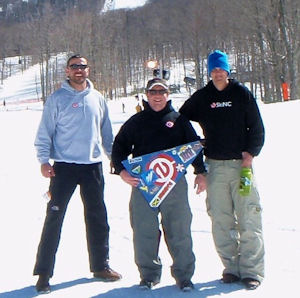 After breakfast, we put on our ski gear and went outside to ensure us getting first tracks. The entire mountain was covered in snow, from top to bottom. Looking up at the mountain, I realized the resort has some very legitimate terrain. Most of the expert trails all run top-to-bottom in the center of the mountain, with gentler winding beginner and intermediate trails extending out on each side from the summit. The groomers had just finished sweeping the mountain, laying out the best corduroy I had ever seen in the Southeast and just as good as you would find in places like Deer Valley and Snowmass. There are two triple chairs that access the summit from the base lodge, serving a 1,000 foot vertical drop. We quickly boarded one of the triple chairs to the summit and were continuously amazed at how much snow Timberline had. Their snowmaking system has been sitting idle for a long time, due to the amount of snow they have received this year. Another thing you will find at Timberline that you won’t find at most other Southeastern resorts is gladed tree skiing. In between several of the marked trails the staff has cleared the underbrush making available a plethora of off-piste options when there is abundant natural snowfall, which there was on our visit. To round things out they also had some great mogul skiing on their "The Drop" and "Off The Wall" trails. Great groomers from almost flat to pretty darn steep, powder in the trees, moguls, and 2 terrain parks (one beginner & one expert); what more could you ask for from a ski area? 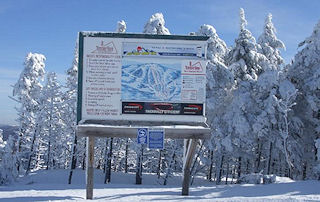 Timberline offers 35 slopes, 45% beginner, 23% intermediate, 14% advanced, and 18% expert; as well as 17km of cross country trails available. The Ski School there is one of the few in the Southeast that offers telemark instruction and clinics as well as the usual ski and snowboard instruction for all levels from "Never Ever’s" through Racing and other specialty instruction. Timberline is a great place for a ski vacation, a mom and pop homey kind of place with a professionally run infrastructure and terrain offerings for every level of skier and rider. They are projected to remain open through March 28 this season (and having plenty of snow to stay open through that date will not be a problem) and are hosting the Snowy Luau Festival March 20-21. Hmmmm, I may have to break out the grass skirt for that one.

Doc, his family, and friends would love to see you at Timberline before this season is over. http://www.timberlineresort.com or  1-800-SNOWING , for some of the best skiing this side of the Mississippi.

Previous Post
1624 miles for the Snowshoe Summit!
Next Post
View of the Lodge at Timberline Resort on Friday March 5th – Photo by SkiSoutheast/SkiNC.com MB Member Teledave