Three of the Four Days of MLK Weekend Look Good!

Come enjoy great conditions and lots of snow for the MLK Weekend!

Today is looking like it is going to be a gorgeous first day of skiing and snowboarding for the MLK weekend crowds that are surely on their way to the mountains from all flatlander locations around the region. I was wrapping up my Thursday at the office and looked out towards Hwy 105 and couldn’t believe my eyes when the thermometer on the roadside signage posted 49°!

We’ll probably see some mountain locations top that high temperature on Friday as forecasted highs are all over the place within our coverage area. Highs around Snowshoe are forecasted to reach only 36° while locations around Wintergreen Resort in Nellysford, Virginia could reach 53° or higher! Upper 40s are forecasted for Banner Elk and the temps could reach the mid 50s around Maggie Valley – home to Cataloochee Ski Area.

Lots of sun is forecasted for your Friday, so if you’re heading to the slopes take sunscreen with you. YES – you can get a major sunburn on these kinds of days on the snow.

MORE EMAILS THAN I THOUGHT!

I mentioned something yesterday about receiving so few emails responding to our "tons of snow" post on Wednesday. Using a term heard too often during NFL football games – "After further review" – somehow I had resorted my INBOX and didn’t catch a bunch of other emails about the story. Evidently my brain wasn’t working early yesterday because bear in mind that I work the internet for a living! That reminds me of an old saying, "The brain is a wonderful organ. It starts working the moment you get up in the morning, and does not stop until you get into the office."

Several others of our readers posted comments that questioned things about the story. However this email question blew me away.

Cynthia W. (last name withheld to protect her from verbal abuse) wrote, "Where do you put all that snow once the season is over? My daughter’s birthday is April 13th and I’d like to buy some of it for her party if that is possible."

Will Mauney, one of our staffers who also is a ski instructor at Sugar has said that he’s been asked that question many times over the years. We’ve been doing this site for 14 seasons now and I have to say that this question takes the cake. We’ve had a ton of funny ones over the years but we’ve never been asked, "Where do you put all the snow once the season ends?"

Will told me a while back that he just says, "They store it in giant warehouses."

I suppose the question stems from the fact that there are a lot of people who think that our manmade snow is "artificial". That term has been used for years by many people. Artificial snow is not like an artificial Christmas tree or artificial flowers. It isn’t plastic. The word "artificial" means "produced by humans as opposed to natural". So I guess when people think of artificial snow SOME think that it is something other than what it actually IS. It IS snow. It’s just manmade and just like REAL or natural snow it MELTS and goes right back into the ground and often drains right back into holding ponds or lakes and is made all over again. So there are no storage tanks or warehouses stockpiling the snow during the offseason.  Of course I guess there ARE storage areas in a sense because those ponds and lakes hold the water until snowmaking crews are ready to make snow all over again.

As far as getting some of it for a birthday party, I suppose a person COULD call the ski area and truck a bunch of it off the mountain. I know that a few ski areas have trucked dump trucks full of snow to off mountain sites for rail jams and such.

SkiPink from the messageboard just stopped by our office on her way up to Ski Beech. She was picking up a couple of SkiNC shirts and tried her best to get a couple of us to head up and ski today. It will be a fantastic day to ski or ride today but unfortunately her invitation reminded me of another quote, "By working faithfully eight hours a day you may eventually get to be boss and work twelve hours a day."

By the way I think both quotes that I used today come from Robert Frost.  One or more of you guys will correct me on that if I’m wrong.

A "Split El Niño Flow" will affect our weather pattern for the next few days and that will create an MLK weekend that will offer split personalities as well. The northern flow will allow huge storms to form as they enter the U.S. via Southern California. That will allow the artic cold to invade the northern portion of the pacific northwest. That is great news for Vancouver and Whistler which should see some HUGE snowfalls from this pattern over the next week. 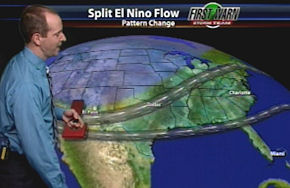 That will be the picture for the MLK weekend which begins TODAY and lasts through Monday. The forecast for this weekend is

A great start to the weekend with highs around 57° in Banner Elk. Lows tonight should dip back to 25° and that will allow for some snowmaking for the ski areas that wish to do so. Friday should be a MARVELOUS day on the slopes.  Saturday should be pretty good for the most part with rain at night. Sunday will simply be a wet day. Monday could begin a little damp with some leftover drizzle earlier in the morning but there majority of the day looks decent as well.

Our best guess is that there will be plenty of great skiing on Friday and all day Saturday. Saturday night and Sunday are going to be wet. Monday is looking pretty good. So three of the four day weekend should be good.

Ditto the North Carolina forecast and just tweak the temps up a degree or two.

Actually the weather looks a little more "hit and miss" for this weekend with chances of freezing drizzle tonight, Saturday, Sunday and Monday. The silver lining in the forecast for West Virginia is that there’s some decent chances of a wintry mix or snow for Snowshoe Sunday and Monday nights. However, here’s the official forecast according to the National Weather Service.

* We’re not certain we’ve ever seen a back and forth forecast for one day like the one we’re reading from the NWS for Saturday and Sunday at Snowshoe.

A couple of other weather gurus sent us some content and Greg Dobson added this in an email Thursday afternoon, "(NOAA) shows above average temps for the next 8-14 days, below average for the next 1-3 months."

David Barker (who emails me from time to time with other weather notes) wrote, "The pattern for the next week shows two systems that are going to be a bit wetter than we’ve seen since before Christmas. I’m seeing this pattern continue for the rest of January with an outbreak of colder air maybe a few days here and there. However the colder weather should reenter the picture around the end of the month and into February."

The great news in all of this is that the ski areas across the region are all in pristine shape with more snow on the slopes than most might need to make it through the end of the season if they wanted to. We’ll undoubtably have some very good snows and much more cold air in our future so the ski areas will continue to be in perfect, mid-season form.

Greg Dobson also added a closing note to his email. "Also, I have not seen you mention it yet, and I don’t have the data to prove it, I am sure you do, but I would bet that this will be the first MLK weekend in a decade in which all ski area are 100% open, expect for 2 trails at Wolf and 1 at Beech. That is pretty darn amazing!!"

We’re already seeing signals of just how mild today will be as the temps at 8:30am are as follows:

In the Mountains of Western North Carolina (we’re tracking the High Country specifically) we’ve now had natural snow on the ground for 28 straight days. It has now snowed 18 of those 28 days. (There’s lots of snow around Banner Elk, Blowing Rock and Beech Mountain as well as many of the surrounding communities.) If you’re headed to Wolf Ridge or Cataloochee you’ll find the
same is true!)

David Lesher’s Canaan Valley / Tucker County, WV weather center has reported 49 straight days with snow on the ground and snowfall on 34 of those 49 days. That record is dittoed at Snowshoe, Wisp and Winterplace Resorts!

That’s it for today. Enjoy the milder temps today and check back within the next 24 hours to see the latest weather news.

Check out the Snow Report at https://www.skisoutheast.com/skireports.php and please send us
your favorite ski photos, ski videos, trip reports and comments to [email protected]