This is Why We Do This…

Story and photo by Brian Dix

Hello, once again skiers and riders of the southeast.

It goes without saying that the Ski Southeast Summit was a hit for the fortunate 181 snow lovers that made it. The consensus from everyone is that the bar had been raised so high that future summits have quite a challenge to surpass it.

Visiting the king can be rare, but timing it when the crown has been freshly polished is even more uncommon. I found myself in awe with the entire experience as it unfolded. This is what the lifestyle of skiing and riding is all about, the chance to experience the unreal.

A majority of use arrived on Friday afternoon, which was a full day after Ullr’s homecoming.

At that time additional layers were a must on all extremities as the mercury was hiding low on the thermometer. If you love blasts of arctic air blowing in your face while walking around in a few inches of fresh dry powder this was the place to be.

The size of the snowflakes were very large and sometimes lumpy, and they fluttered effortlessly as they fell from above. Catching one on your tongue was easy, as there were millions to choose from.

Once darkness settled in, the moment was here to test out the conditions, starting with the Silvercreek side.

This section of the resort offers four lifts during the day time hours that accommodate all levels of skiers and riders. You get greeted with a bonus aroma of sweet-smelling waffles as your lift ticket gets scanned at the entrance. At night three of the four lifts were spinning and it was time to click in.

Night skiing is typically a groomed run affair, but not on this night. The stashes of powder were everywhere, and the glide factor was near the maximum. Views from the chair lift showed fresh tracks accompanying the flocked trees. Ankle-deep to top of boot powder was on the menu.

This chilly night would be the leg-burning warm-up that everyone needed to make it through the rest of the weekend. 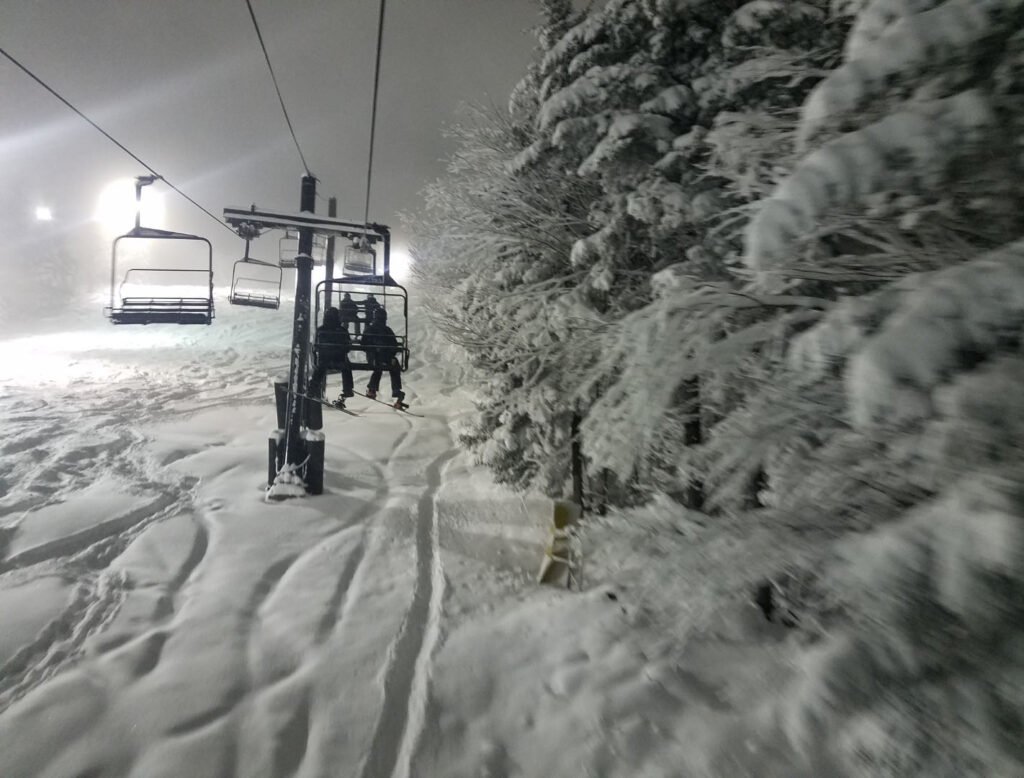 Waking up early next morning we were all greeted with the continuation of the snowglobe. Everyone with a lift ticket that day was given the opportunity to play a fun game called sink or float.

Those who had fat powder skis or snowboard tended to be the winners, I mean the floaters. You can tell who these folks were by the sound effects they made which sounded like woot woot, Yee–haw, and oh yeah! My favorite spot Saturday was the under the appropriately named Powder Monkey Chair Lift was a run called Choker. It takes the gold medal due to being ungroomed and thus boot to knee-deep. I hit this up multiple times to experience that wonderful feeling.

Earning the silver medal for powder stoke was the Ballhooter trail. Bronze would be J-Hook Under The Soaring Eagle lift. There were multiple trails in contention, as the goods were plentiful.

In fact, there is only one area at Snowshoe Mountain Resort that disappointed and that was the Western Territory. The one time I made my way over there I discovered that they had groomed everything.

I shared a chairlift ride with a nice couple also visiting from Charlotte and they too asked why would the resort groom on a powder day? I had no answers for that, but I another chair lift ride later with a ski instructor who said that they may have done that for safety reasons. This is because a lot of people see powder and head in that direction, but they may be getting over their heads and increase their odds of significant injury.

One major component of the Skiers Responsibility Code is for skiers and riders to only go on trails that are within their capabilities.

Once back on the eastern facing side Saturday turned especially enjoyable when the summit gathered at The Boathouse. Being able to meet the readers, the staff, and even some strangers who are learning about this website for the first time was awesome.

Kudos to Mike Doble for his public speaking abilities, as he said the right message to the right audience.

Once we wrapped up an afternoon skiing my wife and I had a chance to navigated our way around the village just before sunset. Great timing for this moment, because the storm was done and the wind had vacated.

We took in the peaceful quietness that was all-encompassing and finally settled for dinner at a place called Toques that had live music, stunning views, and an incredible menu. Personal favorite goes to the poutine dish as it went beyond a 10 out of 10 rating. The final day was obviously bittersweet. It started off with the first tracks under the Soaring Eagle Lift that are indeed a crown gem. I must have got eight runs in during that hour, and there are several more that probably did more. 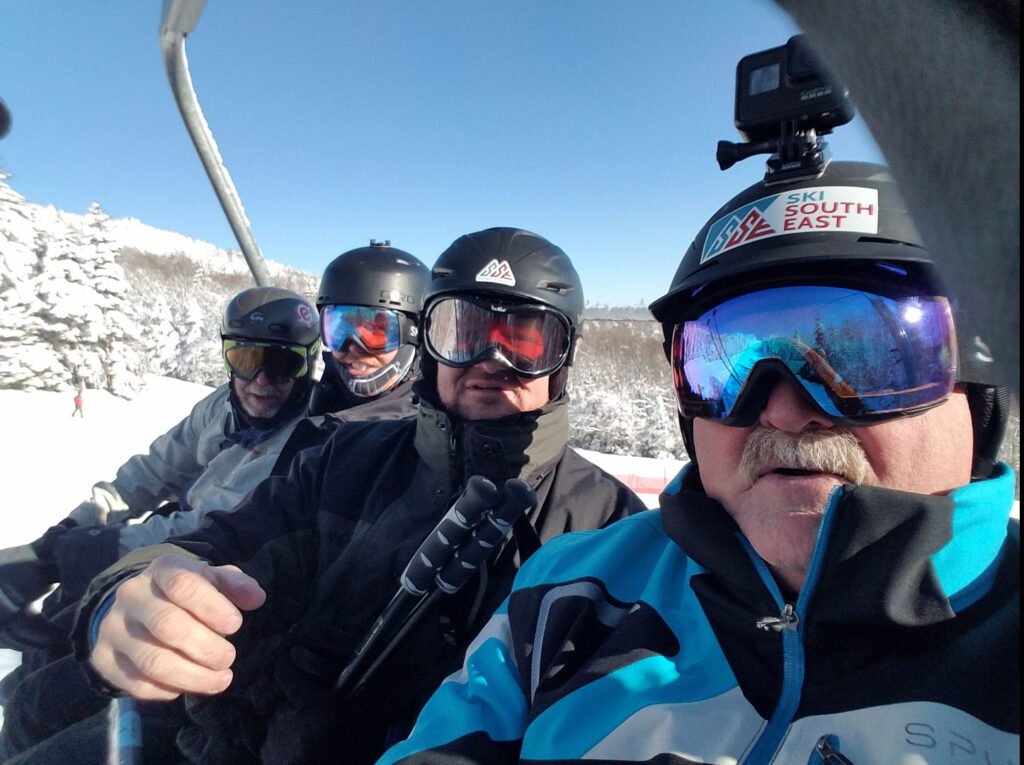 However, the ski day was not quite done yet.

After returning to the hotel to check out we made a way back to Silver Creek. With a little bit of time on hand, I got in five or so more runs on snow that was finally softening up by the warmth of the sun. These final bluebird runs were a fitting conclusion to a fantastic voyage.

People were not wearing facemasks anymore, and all I saw were smiles. Maybe they too realized why we do this. I can see why they named this event the Summit.

The reason being is that this event will be the high point several skiers and riders during the season, and deservingly so. Hopefully, though there will be one or perhaps a few more chances to reach this level of elation with elevation before summer takes over.

When looking around at the powfully blessed scenery I knew and felt that we were not isolated on a monadnock, but instead surrounded the full 360 with summits.

Regardless of whether or not you are able to attend, please know that spring is knocking with ample amounts of snowfall that has yet to come…hopefully. Typically this is when the most terrain is open, the runs are buried, and the goggle tans are all but guaranteed to put instant bragging rights to your face.

So have another go at it while the lift ticket prices are reduced. Your chances of getting that pristine powder glide or mashed potato softness are at the greatest right now.

There will be plenty of time for your equipment to be stowed away for the offseason. The ski areas and resorts are capable of keeping this season going into April, but it is up to you the visitors to justify it.

Previous Post
Here We Go! Friday Snow to kick off Weekend
Next Post
“Skinning-up” and Skiing Down!