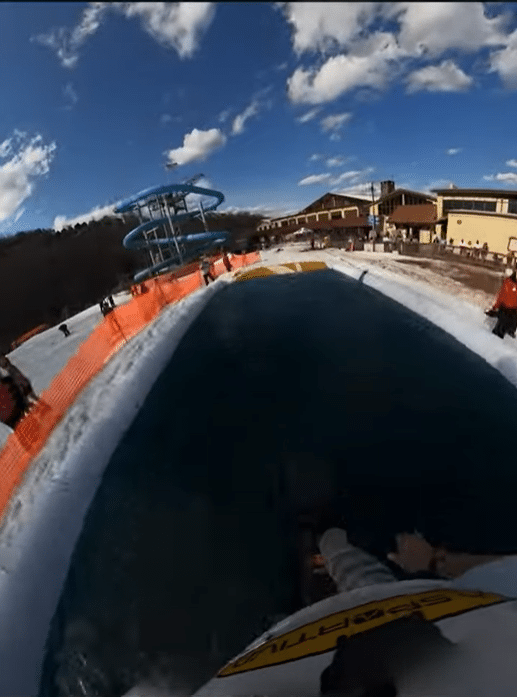 The old wives’ tale claims that March can go one of two ways . . . period. Either, “In like a lion, and out like a lamb”, or “In like a lamb, and out like a lion”. Statistics say that it should be colder at the beginning of March, than at the end. But if you’ve lived in the southeast long enough, you might just happen to know that we can get a BENDER of a storm at anytime/many-time during March.

Regardless of how you look at it, we’ve made it this far into the year. It’s time to start celebrating the over-arching season, to-date. Many resorts will put on a good spring show for their season finale . . . the annual Ober Gatlinburg Spring Fling was one of those celebratory events this past Sunday, March 6th. Let’s take a deep dive into a full-day of fun, with a southeastern winter Olympic style.

The 2nd Annual Mogul Ridge SkiMo Challenge was set to start at the ‘bright-eyed and bushy-tailed hour’ of 7:30am. I made the haul from Asheville that morning which required an early wake-up call.

While it’s called the Mogul Ridge SkiMo Challenge, unfortunately the course wasn’t able to include (advanced) Mogul Ridge due to the depleted snow base. Nevertheless, the course was actually awesome and included nearly 1,000 feet of climbing, per lap.

At the sound of the mass start, the goal was to complete as many laps in the 1hour 20minute time period. The trick was that only completed laps would count, so it was important to get an early-read on how long each lap took . . . i.e. an unfinished last lap was to be avoided.

We started out by going down (easy) Ski School, skinned-up (intermediate) Lower Bear, (intermediate) Upper Bear, and (intermediate) Ober Chute. At the top we got our lap counted by Ski Patrol and transitioned downhill. There was a little uphill skate segment before plummeting down (intermediate) Castle Run to complete the downhill portion of the lap.

I was able to compete 5 total laps, with just over two minutes to spare, to win the race (along with a sweet hat and hoody sweatshirt, to boot). The second place finisher completed 3 laps. The remainder of the racers finished one or two laps, respectively.

The Giant Slalom race was featured on (intermediate) Castle Run. The format was your combined time of two runs, on a slush-filled course. On the first run, I posted a time of 18.08 seconds. I took the red lift back to the top and gave it another go, armed with a better idea how to ski the course. I was pleased to see that I knocked off a complete second off my time and skied a 17.08 on the better of my two runs. My combined time put me in 3rd place overall, out of a couple-dozen competitors.

Last year, I tied for second in this event out of probably 20+ skiers and snowboarders. After some fairly tired legs, I knew this was going to be a tough one considering that most of the guys in this event are half my age!!! The warm temps made the in-run super soft and slow . . . not ideal to get the pop needed for big ollie height.

With about 20+ skiers and boarders this year, the heat was on. Basically, they just keep raising the bar . . . you have two tries at each height, before being eliminated. I stayed with the pack, until it was whittled down to just three of us. The fella that won last year is solid, and he took first place again, this year. Myself and another competitor duked it out to determine who ended in either second or third place. In a sudden-death format (i.e. one try) at a determined height, I was able to take second place and $50 cash.

As always the big crowd pleaser is the pond skim. The trick to a successful pond skim surf is to get more speed than you think you need. There were many baptisms that day, but those that actually traversed the icy cold waters needed to hike-up, from the initial in-run.

At the end of the day the emcee passed out awards, cash prizes, and some swag. He thanked the sponsors but was a little somber and said that while they only got 57 days of skiing this year (as compared to over 100 last year). Someone shouted from the crowd and corrected the emcee and said that it was actually 57 AND A HALF DAYS . . . There ya go, the stoke was high this year at Ober Gatlinburg.

Here is a little calendar of some upcoming spring festivals. Try YOUR hand at some of these similar events.

CARDBOARD BOX BUILD
5:30pm-8:00pm – Meet at Shavers Center to build your box sled for Sunday’s competition. We will provide the cardboard and supplies so that you can make the fastest sled around. We’ll even store your sled until Sunday’s race which is at 11:00am on Skidder slope.

POND SKIM
Ski season has many great traditions and none greater than the spring pond skim. Don’t miss this celebration of games, costumes, and contests. Competitors will be judged on both costume and style, so be sure to bring both. The pond skim will take place in the Ballhooter/Boathouse area.

10:30am-12:30pm – Registration at the slope area near Lower Ballhooter lift. Registration is free but there are limited spots available. Come early to reserve your spot. Helmets are required. Anyone under the age of 18 must have a guardian sign for them.
12:45pm – Line up for event. If you’re wearing a costume, show up at 12:45pm to join the costume parade for a chance to win “Best Costume.”
1:00pm – Pond Skim competition begins

Awards will be held on the Boathouse deck following the event.

CARDBOARD BOX SLED RACE
Test out your homemade sled on Skidder. Awards for best decorated and fastest sled will be given.

Awards for best decorated and fastest sled will be given.

Winter isn’t over until we say it is! Join us at ASM March 26 & 27 for lots of fun, free events for the entire family.

Registration for all Meltdown Games events is FREE. Participants can sign up in the lodge the day of the event.

Any guests who have purchased a ticket for Sunday’s session may transfer their ticket to Saturday or another day next season free of charge.

See you on the mountain!