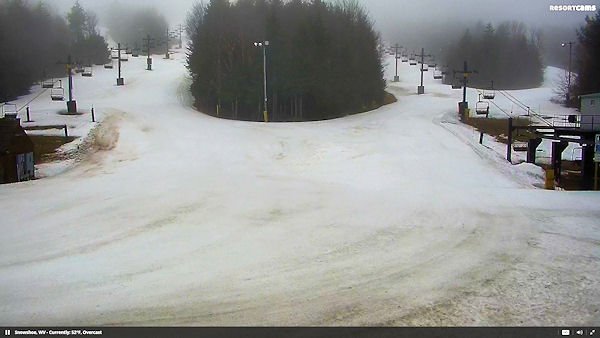 On average, base depths dropped another 2″ in the last 24 hours and temperatures this morning are about 2° warmer than Thursday morning. It IS Spring and I guess ole Punxsutawney Phil was correct about an early Spring. 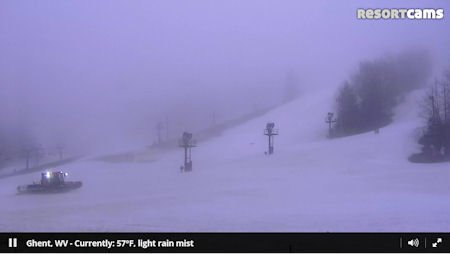 I toured several of the ski cams this morning and “FOG” seems to be blanketing a lot of the ski areas. So were snow groomers. I watched several morning crews scurrying to push snow around and maintain good conditions for today’s skiers and snowboarders. That gets lost this time of year. For the most part even if we were to get another cold snap – the snowguns have been turned off everywhere. So the snow grooming crews really have to do their magic to push some mounds around and lay down some corduroy for another day of playing on the slopes.

Fog and skier traffic does a number of snow – as do these 65-70° temperatures. As I was looking around at some of the cameras late on Thursday there were a few ski areas that were looking perilously close to being forced to close perhaps a week earlier than they were anticipating even this past weekend.

Those resorts with deeper base depths look primed and able to make it to either March 20th or the 27th but even they look a little “brown” or worn around the edges. To be honest I could not believe the difference in the conditions at Snowshoe this morning compared to just four days ago. Of course that is always to be expected this time of year but I guess the thing that makes this season different is that it is ending like it began.

If you think about it, we had nothing going on to speak of in November and December. Then on January 4th it was as if a switch flipped and in just a couple of days everything went to winter, almost overnight. As an illustration of that fact, Canaan Valley saw only one-half-of-one-INCH of snow in November; and then only 3.4″ of snow in December. That is UNPRECEDENTED. Then from January 4th through the end of the month they saw 49.2″ of snow. In February they saw another 41.7″. Typically MARCH is a VERY SNOWY MONTH, but it sure looks like we could see a March with less than 4″ of snow falling.

I was speaking with a friend on Thursday and sharing just how AWESOME the conditions were at Snowshoe this past weekend. One week ago this morning we were driving up through significant snow in West Virginia. All the way from the WV line to Snowshoe, we saw tons of snow. It snowed Friday night. It snowed moderately hard Saturday night and again on Sunday morning as we were leaving the mountain. Conditions all last weekend were (and I am not exaggerating) MID-SEASON PRISTINE.

About halfway down Snowshoe Drive to the bottom of the mountain – the snow disappeared. It was ALL GONE! All of us in my truck could not believe our eyes. There was some snow up on the ridges, but there was NO SNOW along either side of the road and that was the case all the way back home.

I repeat – it was as if a switch flipped. Just FOUR DAYS ago we were looking at awesome conditions across most of the region. The photo of the day yesterday showed pristine-white snow framing the awesome photo of a Wounded Warrior event at Appalachian. Fast forward to this morning and we’re seeing ski areas with fast-narrowing slopes.  The fact that they are getting some moderate showers across the region for the next couple of days won’t help.

Check the snow report for all the details and I’ll be back with you on Saturday. Enjoy your day.