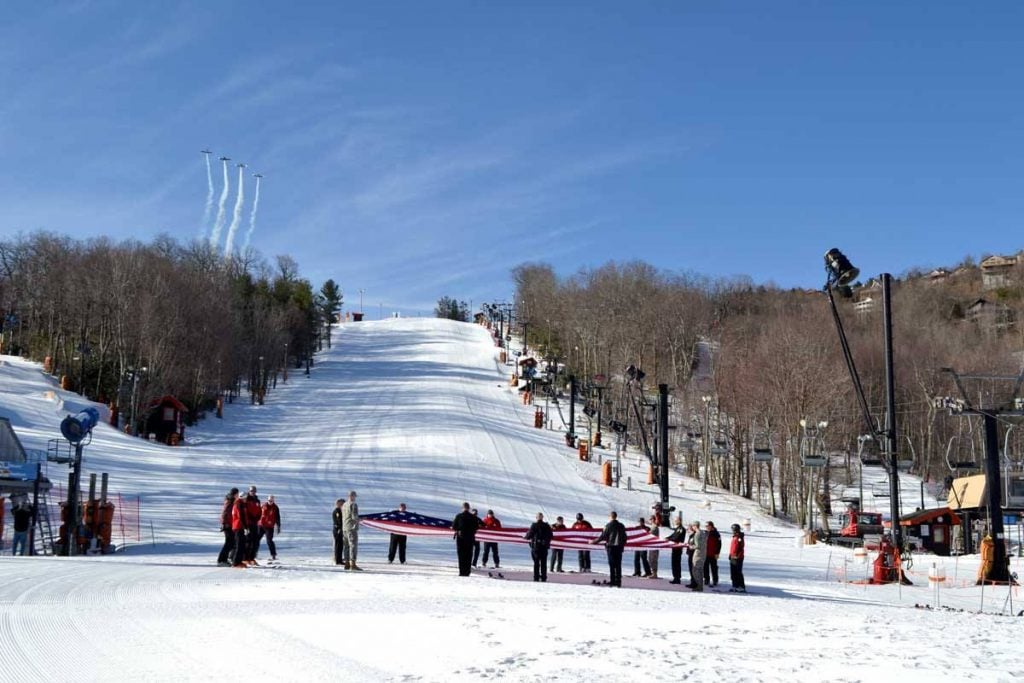 Before I get to the numbers that I plan to share pertaining to natural snowfall totals this season, I failed to mention yesterday that Kenny Griffin is now enjoying a few days off out in Tahoe. I forget which mountain he is based at but I know that as of this past Monday that area was bombed with from 30-48″ of snow. I got an alert this morning that it was 44° there this morning. This is Kenny’s first trip out west and everyone’s first trip out there deserves to be awesome.

As I was typing this I received another alert that Beaver Creek has 4″ of new snow this morning. Needless to say it has been a very snowy Winter for the western and Colorado ski resorts. 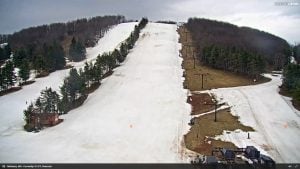 This image is of Wisp this morning and bear in mind that we’re seeing “Spring Conditions” popping up at all resorts. Tis the season. (Click to enlarge!)

Over the last few mornings each of the resorts have seemingly decided that the mild temperatures that are some 10-15° warmer than normal for this time of year are such that it melts exactly 2″ of snow per day. [Insert sarcasm.] However that is the number that seems to be acceptable to show – whether it is a marketing number or one pulled from a hat. (No resort goes out and measures it.)

Highs today here in the High Country are expected to reach near 70°.

I shared the impressive base depths that are covering the slopes of the southeast in Wednesday’s FirsTrax report, so just KNOW that there IS plenty of good snow depth and side-to-side coverage at this point. With the continued mild temps and some rain in the forecast, the good conditions right now might be the best conditions left in this season as there are just 16-17 days left in this ski and snowboarding season. We already know that Appalachian and Snowshoe plans to ride until March 27th and Cataloochee’s end of season date is the 26th.

Others will call it quits this Sunday (Omni Homestead just announced that this Sunday will be their last day of the season and Canaan previous announced the 13th as their final day), and some will close on the 20th (Timberline is among those).

We’re seeing current, early-morning temps below and highs forecasted in the mid-70s at some locations. (Massanutten 75° later today.)

With the close of this ski and snowboarding season just days away AND with the 15 day forecast showing NO really cold temperatures – we’re going to go out on a limb and say that whatever the snow totals reflect right now are what we’re going to get.

(Obviously we could see some snow late in the month…but the forecast from now through March 24th is for highs in the upper 50s to mid 60s and lows in the 50s, mid 40s and upper 30s. So it’s looking like the end of the season will resemble the beginning.)

So let’s take a look at how the prognosticators did for this season. Remember before the first Autumn leaves began to fall off the trees, weather gurus like Ray Russell and meteorologists from our Brad Panovich to Joe Bastardi to OpenSnow ALL forecasted “A MUCH SNOWIER THAN NORMAL WINTER”.

Let’s see how these guys did.

So those big fat 125%-150% of normal predictions were off by a country mile! Interestingly, three of the four Virginia ski resorts pulled 100% to 114% of their normal snowfall. The lowest snowfall this season compared to average was at Sapphire Valley but to be honest that number is skewed by the fact that their marketing material SAYS that they average 30″ of snowfall annually whereas we’ve found that not to be the case over the 20 years that we’ve monitored snowfall at every resort.

That would mean that Appalachian Ski Mountain received the least amount of snow this season compared to normal with only 52% of normal snowfall.

Needless to say that the local, regional and national prognosticators all got it BIG TIME wrong this season.

We can hope that they ALL predict 50% of normal snowfall for next season and perhaps then we’ll see a snow-filled 2016-2017 winter.