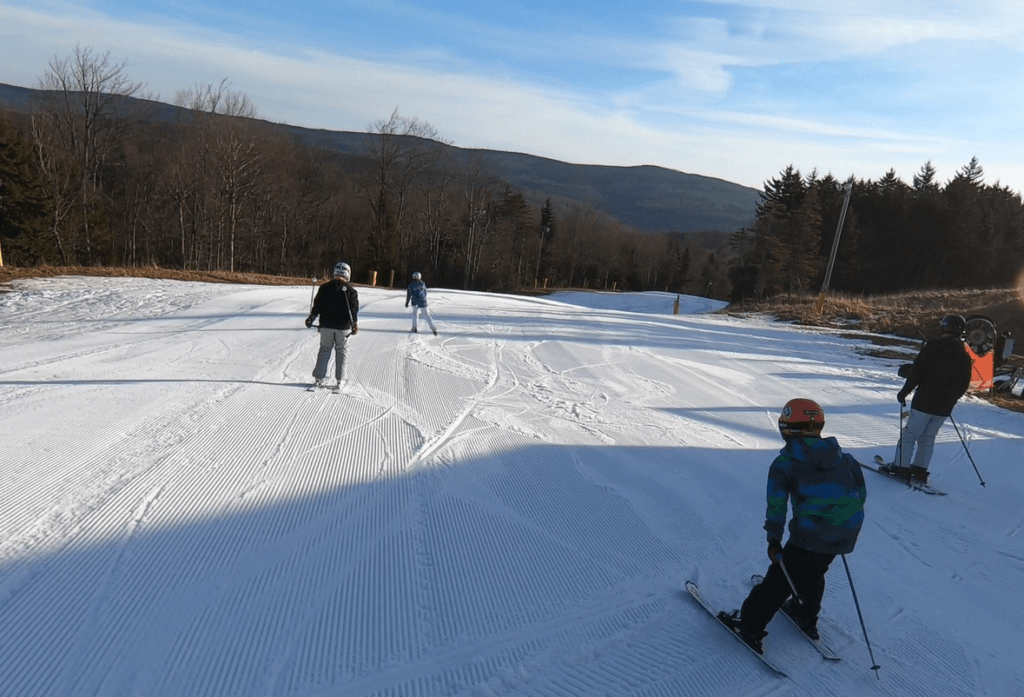 Photo/Video Header shows how hard mountain ops crews work to get the slopes ready no matter what the weather may be. In the video below you can hear the rain hitting the deck and if you look closely you can see driving rain at 7am this morning…and yet snow grooming was happening to prep the slopes to be as good as possible for guests.  (Light to moderate and spotty rain is in the forecast for Sunday.)

It’s Sunday…so today is my day to ramble a bit with the FirsTrax news. So if you’re wanting to quickly know what the conditions are like at YOUR favorite ski resort, check the SNOW REPORT.

What I can tell you pretty quickly is that nothing has changed from yesterday. In fact, as I got up to do the snow report remotely here from beautiful Snowshoe, West Virginia, I am slightly amazed to see that our ski resorts have held up as well as they have in the face of total abandonment of ‘old man winter’. I’ll elaborate more on my personal experience at Snowshoe Mountain on Saturday, but suffice to say that every ski resort is reporting the same slopes open today, as were open on Saturday. That is really impressive to see because skier traffic and mild temps just don’t make for lasting snow.

The SNOW REPORT today is all the more impressive when you consider that for most ski resorts it’s been since December 19th when temperatures allowed snowmaking. So it wasn’t like ski areas were able to stockpile as MUCH snowmaking as they would have liked anyway.

However, a quick glance of slopes and trail openings for your Sunday consideration are below: (If you’ll take some time to visit the LIVE SKI CAMS, you’ll see pretty good snow coverage.)

I had to chuckle (painfully) at Kenny Griffin’s Saturday morning FirsTrax post title. This pattern has been just horrible for ski and snowboarding fans. If you were frustrated with Saturday’s temperatures and weather, then we probably should not have complained, because things are going to be a bit worse for Sunday into Monday morning with somewhat MILDER temperatures with some rain mixed in.

This just isn’t pretty. I was texting Joe Stevens this morning and shared that I was doing the “Rain Report” this morning, rather than my desired snow report.

The video header this morning shows Snowshoe Mountain’s grooming crews out trying to do the best they could as the rain was falling pretty steadily.

As I checked out the LIVE CAMS, things looked pretty damp already with some narrowing slopes and trails as well as some thin coverage beginning to show. Bear in mind that the forecast is for anywhere from 60-90% chance of rain, light to moderate Sunday into Monday.

You can view the LIVE CAMS yourself – but the “picks of the morning” would certainly be Appalachian, Cataloochee, Massanutten, Canaan, Snowshoe, Winterplace and Wisp.

A QUICK GLANCE AHEAD…

Occasional rain, drizzle and fog is the weather storyline for your Sunday, along with mild temperatures. Speaking of which, temperatures tonight will be running nearly 30-degrees above normal. The rain concludes early Monday, followed by bright sunshine and cooler temperatures that will be particularly noticeable by Monday night. New Year’s Eve and New Year’s Day feature scattered clouds and temperatures closer to where they should be at this time of year.

There is even some NATURAL SNOW in the forecast and snowmaking temps as we look ahead to Monday night into mid week.

I think that I can safely report that with perhaps one or two exceptions, our ski resorts are enjoying a VERY, VERY busy skier-visit Holiday week thus far. Lift lines sure seemed to indicate “healthy crowds” and that is a good thing for the resort’s accountants as they need this week to be a good one. A large piece of the annual financial budget comes from this one-week, so a busy week on the slopes is good for business. Resorts can’t make those huge investments in snowmaking tech and upgrades without it.

I think it is also safe to say that the slopes and lift lines were a bit more crowded due to the fact that resorts are operating with only 30-60% of trails open. When I was checking in Thursday morning here at Snowshoe, I heard someone come in and ask if there was any availability (rooms open) on the mountain and they were quickly told that the mountain was 100% booked. Of course, that could have changed a little over the last couple of days, but suffice to say that Snowshoe is having a busy weekend/Holiday week.

On Friday, I hit up the main trails for the first hour and the slopes QUICKLY got packed by 10:30am – especially on beginner and intermediate slopes. You could still avoid the heaviest traffic by doing Camp 99, or over at Cupp Run…but things were p-r-e-t-t-y crowded to say the least.

So Friday night I made the decision for myself and (11) other souls who are hanging with us this week – to head over to Silvercreek on Saturday morning. We geared up and hit the bus stop in the Village at 8:40am and as the Silvercreek bus pulled in, it was FULL of people coming FROM Silvercreek to the main trails atop Snowshoe. I was a bit concerned that I might have made the wrong decision. However, as we reached Silvercreek and got on the slopes on that side of the mountain, a smile was evident on ALL of our faces as the snow was perfectly groomed and nearly empty – compared to the previous day on the main part of Snowshoe’s Basin Area. We made 9-10 runs down various trails and never once had to wait on a chair to ride back up.

Unlike the day before, the snow didn’t go full-on-mashed-potatoes until maybe 1pm or so. In fact, the first turns down the mountain was spot-on, firm-groomed corduroy that had my skis chattering a bit. Imagine my surprise.

Let’s just say that the Silvercreek trails at Snowshoe was hidden gem on Saturday.

I’ll post some photos and videos in a bit so keep checking back and be sure to follow us on Facebook and Instagram as Kenny and Betsy are braving the wet conditions this morning and I have a lot to share from Saturday.