Snowfall Totals for the Year

With the end of the season officially happening on Sunday, I thought I would go over the snowfall totals for all of the ski areas this year.  I made a chart showing the totals for each resort and compared it to their quoted average.  Snowshoe and Timberline might see some snow this weekend, but it wouldn’t change the numbers much at all. 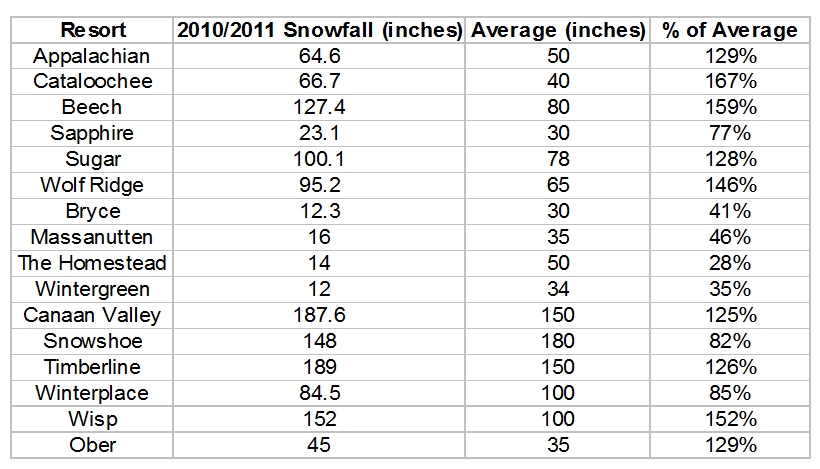 As you can see, we had a huge discrepancy in both numbers, and percent of averages.  The Virginia resorts struggled this year with natural snowfall.  The snow just never seemed to make it to them.  Nonetheless, they had a solid season thanks to their snowmaking capabilities.  Even with the lack of natural snow, they were able to stay open just as long as the rest of the resorts in the region.

The North Carolina and Tennessee ski areas both had well above average years in terms of snowfall.  This is the second year in a row for this to happen.  Most of this snow came in December and January and it fell in large doses.  I myself had a few pretty deep powder days and was able to ride off the trails a lot, venturing into the woods or poaching lines underneath lifts.  It was pretty amazing skiing and riding for a while there.

As usual, the resorts in West Virginia and Maryland saw the most snow in the region.  Timberline takes the cake for most snow this year as they saw 189 inches.  I know Canaan is right beside Timberline and they should have the same amount, but they closed a couple weeks ago so I didn’t count any snow to fall there since then.

Snowshoe and Winterplace had slightly below average years.  That said, Winterplace closed with 100% of the mountain open and Snowshoe has almost the entire main basin still open, so it was still a really good year for both.

Finally, Wisp had another excellent year.  I really think they might need to change their average and raise it from the 100 inches that it currently is.

Summing up, it was another great winter for skiing and riding in the Southeast!  The second half of the season wasn’t as ideal as we’d all hoped, but the first half more than made up for it, especially considering the fact that we were predicted to have a mild and dry winter back in October.  Let’s hope the snow keeps on falling next year!