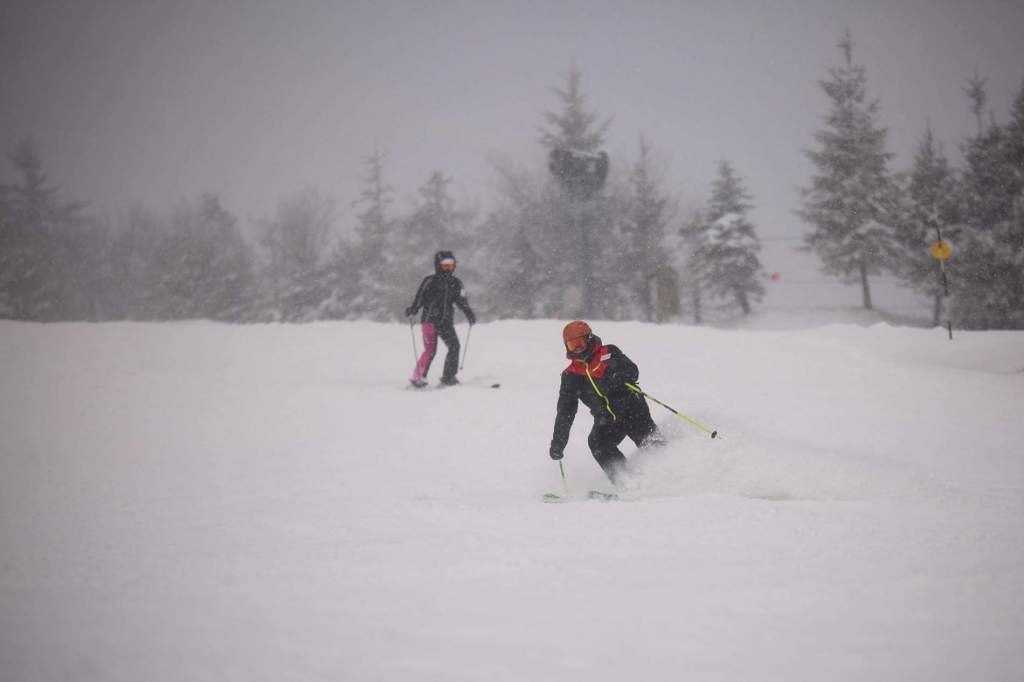 Yesterday I talked about how the forecast was calling for additional light to moderate snow in the North Carolina and West Virginia mountains.  Forecasted amounts ranged from an inch or two to 8″.  Mother Nature blew those amounts out of the water.  I had a text this morning from Mike and he said he had 7″ at his house in between Boone and Banner Elk.  I was pretty stoked on that.  And then I looked at Snowshoe’s report and my mouth dropped.  Here’s the updated table with snow amounts.  I put the 54 hour total in because the snow started very late Sunday night/early Monday morning.

This is one of those mornings where I wish webcams didn’t exist.  I am dying to ride some powder and each time I look at Snowshoe’s cams I freak out. I mean just look at this, the snow is starting to pile up in front of the Shaver’s Centre cam and the picnic tables on the deck are buried.

Snowshoe opened both Upper and Lower’s Shay’s back up and left the bottom ungroomed.  Not only that, but all of the glades are open.  This is turning out to be a legendary storm cycle for Snowshoe and it’s ironic that it’s happening right before and on the 25th anniversary of the Blizzard of ’93.  When all is said and done, they might end up with more snow from this cycle than that storm produced.  The storm in ’93 dropped 44″, albeit in a much shorter time.  The Shoe currently has 39″ since the snow started falling on Monday morning and there’s more in the forecast today.  SHEESH.

Elsewhere, the snow wasn’t quite as plentiful but more fell than was expected.  Cataloochee was finally able to get in on the snow fun and is reporting an inch this morning.  Appalachian Ski Mountain saw another 5.5″ and is close to the foot mark this week.  That place looks like mid-winter right now and is closer to peak season conditions than not.

Sugar Mountain received another 8″ of snow and they are up and over the foot mark now for the week.  They even added another trail to their open list and are up to 11 now.  Gunther’s Way is probably pretty epic this morning!

Back up into West Virginia and Winterplace is having a solid week.  Another 5″ of snow in the past 24 hours and they are at 13″ for the week now.  It looks amazing out there right now and the snow was still falling this morning.

It really is a bummer that Timberline is closed again today as they’ve now seen 16″ of snow in the past two days.  I guess it’ll still be sitting there, untouched, and waiting for guests tomorrow though.

As expected, this Northwest Flow snow didn’t make it over into Virginia but Wintergreen and Massanutten (closed until Friday) are still looking dapper after the snow they saw on Monday.  Bryce wasn’t quite as lucky but they remain open as well.  Below is a sweet aerial video from Wintergreen yesterday, showing off the snowy conditions after 6.5″ fell.

The Northwest Flow snow machine will continue today and begin to taper off this afternoon and tonight.  The forecast right now shows minimal additional amounts in the NC mountains with a few to several more inches possible up into West Virginia and Wisp in Maryland.  Then again, I said that yesterday so who knows what I’ll be reporting tomorrow morning.

I mentioned a week or two ago that I didn’t want to proclaim this a Miracle March.  Well, it’s time to start doing so and especially so after the February we had.  The turnaround in conditions at the open ski areas has been remarkable.  Just check out the difference in the snow at the top of the Ballhooter lift at Snowshoe from the end of February until now.

That is unbelievable.  While other resorts haven’t seen as drastic a change as that, all of them have seen a noticeable uptick in the quality of conditions.  I haven’t mentioned it in recent days due to the natural snow, but snowmaking has begun to taper off and only a couple places are actually continuing to turn the guns on.  Even with that fact, we’re in a place now where several resorts should be able to make it to the end of the month if they want.  So yes, Miracle March it is!

Finally, I mentioned how it’s the 25th anniversary of the Blizzard of ’93.  Well, yesterday it was anyways.  We’ve written some things about it before so if you are wanting to refresh yourself on it, below is an article I posted 5 years ago.  Wow, I can’t believe it’s been that long since I posted it!

That’s it for this Hump Day.  What a week it’s been, and it’s only Wednesday!