March is the New February 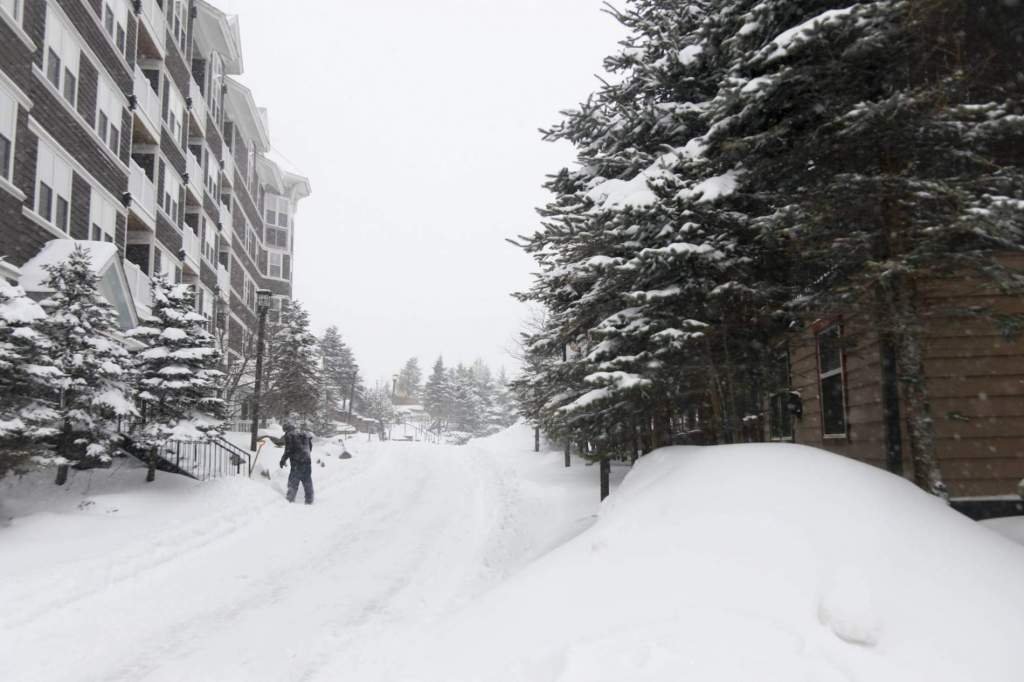 Once again I stole the title of this post from Cataloochee’s snow report.  It has been full of gems in recent weeks and today is no exception.  The month of March has been excellent so far and yesterday was no different.  Almost all of the remaining open ski areas in the region saw measurable snowfall yesterday, with one in particular scoring a HUGE event.  Weekend warriors like myself were and still are drooling looking at the webcams.

Yesterday sure was exciting.  The snow came in fast and heavy and totals added up pretty quickly.  At times the snowfall rate was running at several inches per hour and it almost looked like rain on the webcams it was coming down so hard.  The snow was over for the most part, except for some areas, by early to mid afternoon.   The heavy snowfall rates did produce some impressive numbers though, especially when you consider the relatively short duration of the event.  Below are those numbers.  I lumped them into one 30 hour total because the snow didn’t start falling until late last night/early yesterday morning.

In North Carolina, Cataloochee got skunked.  The snow line didn’t quite make it down to the southwestern portion of the state which is a bummer.  In the High Country, App and Sugar had a decent event though.  I believe this is App Ski Mountain’s biggest single snow event of the season and Sugar racked up the snow as the day wore on.

The Virginia ski areas are always in a snow shadow when storms come in from the west and northwest.  Yesterday’s system came from the south though and so they had one of, if not their best, snow event of the winter.  Bryce got the short end of the stick, but Massanutten and Wintergreen both saw several, well more than several, inches of snow.  I’m always pumped when the VA resorts get snow!  Here’s a clip from Wintergreen where some soft turns were available.

Up in Maryland, Wisp Resort was on the lower end of the snowfall range.  With the storm coming from the south, the bulk of the moisture didn’t quite make it that far north.  However, they are reporting a very respectable 3″ of snow and the webcam looks like mid-winter out there.  It’s actually snowing pretty hard right now as I type this.

And then we head to West Virginia, where the heaviest amounts fell.  Winterplace has seen 8″ of the white stuff, and I believe that too might be one of if not the biggest single snow event of the season for them.  It’s a shame that Timberline is closed until Thursday, because that 6.8″ of fresh snow would have been fun to ski and snowboard in today.  Finally, Snowshoe got absolutely HAMMERED.  They are reporting 20″ of snow in the past 36 hours and it looks absolutely amazing up there.  They’re up to 28″ in the past 5 days now and 34″ in the past week and a half or so if you count the snowfall we received on the Friday before our Summit.  SHEESH.  Follower of the site Sean Mahoney was lucky enough to be out there yesterday and he said this…

“Just read Joe’s column for today. It’s crazy at Snowshoe! Don’t know about anywhere else but…Skied knee deep powder all day today! And snowing HARD at 11pm again! What a change from 10 days ago. This mountain doesn’t even resemble the grass of last Tuesday and Wednesday. Just FYI, the season is just really gearing up, up here!!!  Boathouse table at noon today! Doesn’t get much better…”

Today should be amazing up there and any open resort to be honest.  This fresh snow combined with the recent snowmaking has created some absolutely fantastic late season conditions.  It’s hard to believe where we were just 12 days ago…

The snow will continue to fly today/tonight for some resorts.  Northwest Flow takes over and that means the usual suspects are looking at more accumulations.  The West Virginia ski areas and Wisp in Maryland are looking at 2-8″ of additional snowfall today, tonight, and tomorrow.  It’s going to be DEEP at Snowshoe.  The higher elevations of the NC High Country are looking at several more inches as well.  App and Cataloochee are forecasted to see 1-2″ according to the NWS, with Sugar probably seeing a little more than that.  Tomorrow should be another swell day.  Today should as well for that matter.

In yesterday’s video I discussed the late season schedules.  If you didn’t watch all of it here is a quick rundown of who’s open.

North Carolina
App Ski Mountain and Sugar remain open on a daily basis with both day and night sessions.  Cataloochee is open as well but they are done with night sessions for the season.  All three of these resorts should be able to easily make it until next weekend at least.

Virginia
Bryce Resort is open with weekday hours of 10am-4pm.  Weekend hours will be 9am-5pm.  No word on anything past this weekend so we’ll have to play it by ear.  Massanutten is closed today through Thursday and will reopen on Friday for the weekend.  I’d imagine it’ll be day sessions only but don’t quote me on that.  Wintergreen is open daily with hours through Thursday being 9am to 3pm.  Friday to Sunday hours will be 9am to 5pm.  No word on what next week’s schedule is.

West Virginia
Winterplace is open through Saturday with hours of operation being 9am to 4:30pm.  No word yet on anything past then, but they do have a note on their site that says “bonus days may be added”.  Snowshoe is open daily, although Silver Creek has been closed during the week so night sessions are limited to Friday and Saturday.  At the rate they’re going, it’ll stay that way for several more weeks.  Timberline is closed for now but will re-open on Thursday.  Look for them to have day sessions only from then until Sunday.  No word on next week’s schedule.

Wisp
The Maryland ski area is open daily through Sunday with hours of operation being 9am to 5pm.  There’s no word on a schedule for next week, but I’ve got to imagine they’ll be open as I already mentioned it looks really good up there.

One thing you’ll notice is that several resorts still have no mention of operating hours next week.  Hopefully this recent snow will entice them to stay open.  I’ll let you know whenever that info comes out.  Who knows what’ll happen, so get on the mountain if you can!