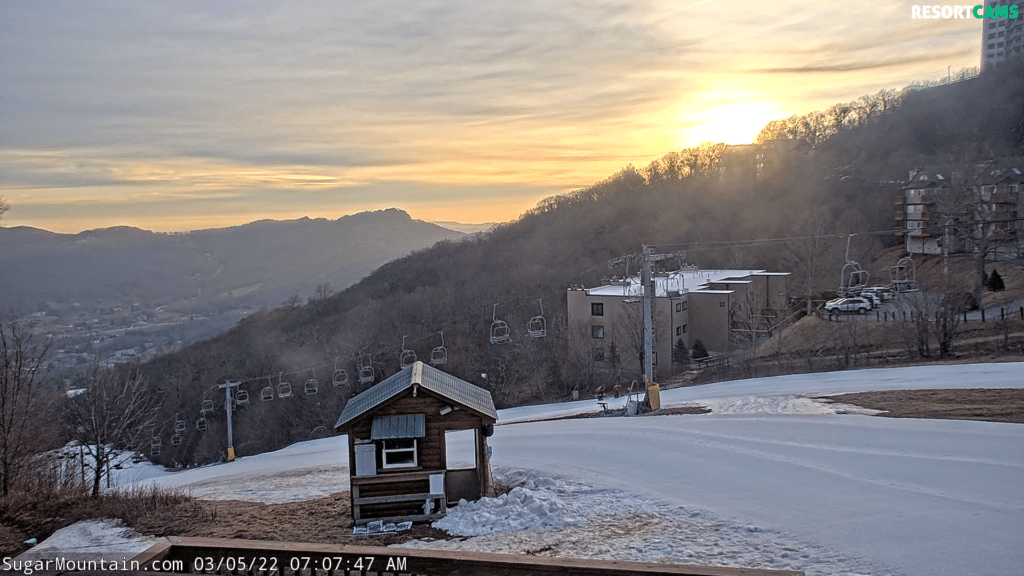 Spring doesn’t officially hit until March 20th this year. That’s still 15 days away, however, we’ve been experiencing some rather significant, spring-like weather with mild temps and as much as 3-4″ of rain over the last two weeks. We had an amazing run of cold temperatures and nice snowfalls all through January and right up until February 19th. Reported base depths at the ski areas were monumental with Appalachian Ski Mountain leading the region with 9.5 feet of maximum base depth. Sugar Mountain Resort, North Carolina’s largest ski resort was reporting 43-93″ of base or almost 8 feet of snow! Some of the West Virginia resort were reporting 60-68″ of snow (nearly 6 feet) – I did the math so you didn’t have to!

That was then. Last Saturday, February 26, I reported that ski resorts had lost as much as a foot or more of their base snow after 3-4″ of rain hit the area – at about the same time that mild temperatures did. This last week has been beautiful, with brilliant sunshine all week long and some of our ski area mountaintops saw high temperatures into the mid and upper 60s.

Those high temps have done a number on the base depths with some reporting another foot to 15″ of base depth loss SINCE SATURDAY, February 26. Not sure if you’re keeping up with the math – but that is a drop of THREE FEET of base since mid February.

The GOOD NEWS is that the ski areas still have good side-to-side coverage on most trails and plenty of base depth to weather the rest of the season. HOW LONG “the rest of the season” IS, is another story. Wolf Ridge Resort shocked everyone by closing (perhaps) earlier ever on February 21st. Sapphire Valley Resort is also closed for the season. Ober Gatlinburg has already announced that tomorrow, Sunday, March 6th will be their last day for skiing & snowboarding. Ditto that announcement for The Omni Homestead Resort in Virginia.

That will leave us with a dozen ski resorts still going for a bit longer.

I was speaking with a buddy, and one of the area’s mountain managers on Wednesday of this week and when I asked him how things were holding up, he replied, “Well we are like every ski area in the region right now. We have plenty of snow and most all of our slopes open, but this weather has us ‘losing that snowy glow’.”

I’d never heard it put that way, but we are beginning to see the signs of real, spring skiing kicking in. Unfortunately, we have another few days of temperatures that will reach into the mid and upper 60s ahead AND some significant rain coming in Monday and Monday evening. That will eat more base depth.

However, “tis the season” as they say. We’re winding down to the last 15-28 days of the 2021-2022 Ski & Snowboarding season here in the Southeast and mid-Atlantic. A few ski areas WILL call it quits over the next two weekends and a few will fight to stay open perhaps through March 27th to April 2nd.

Some CHANCES of Adding to that Snowy Glow…

There are some chances of natural snowfall Wednesday through Saturday of next week – especially into West Virginia. Low temps will probably being frustratingly JUST ABOVE freezing so snowmaking may not be happening over the next week. THAT and a lack of skier interest may prompt ski area bean counters to pull the plug on the season a bit early, unless some weather pattern changes are in the offing.

I personally have a ski trip planned for Timberline Mountain from March 11-14 and things are looking pretty decent for nice conditions, with perhaps a bit of ambience snow. If you’re planning to be up that way, give me a shout out. I have ten of us making the trek to hit the slopes at least once more before we pack it in and start unloading the kayaks, golf clubs and boats.

A Quick Glance. For More Deets visit the SNOW REPORT:

All resorts are open for day & night sessions unless stated below.

Previous Post
Refreshing Friday To End The Week
Next Post
In Search of Corduroy; A Focus on Grooming