In Search of Corduroy; A Focus on Grooming 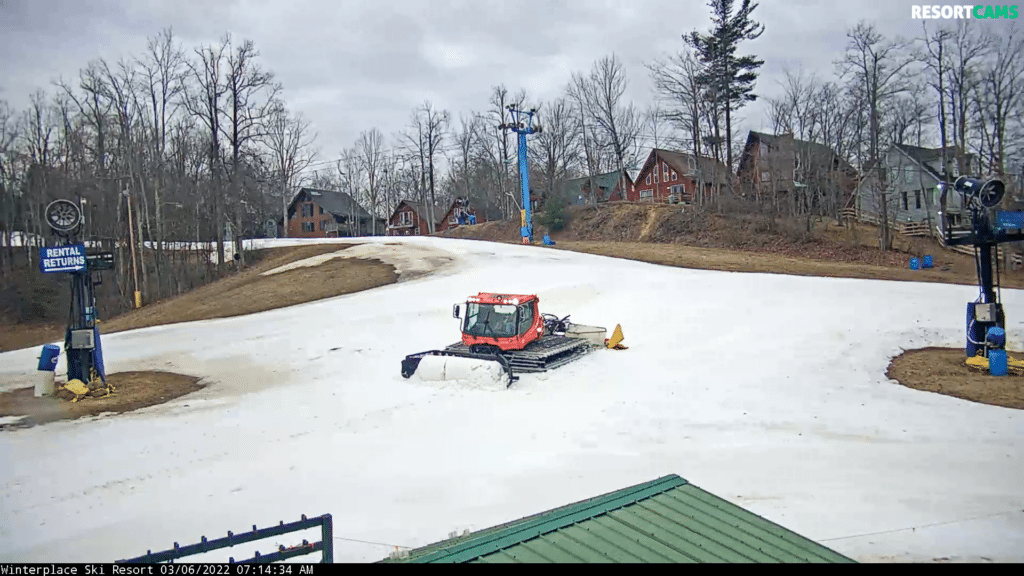 As I virtually toured the resorts of the Southeast this morning, it quickly became apparent that without the talented groomers at each of the ski resorts, doing their thing – today would be looking a lot more rough around the edges. If you care about these sort of things (and you should), you can get up a bit earlier that most and check out the LIVE SKI CAMS at around the time the sun comes up.

Today’s photo of the day (above) is from Winterplace Resort.

Like clockwork, these snow farmers wake up early, grab a thermos of coffee (or a 5-hour energy drink), and they crisscross the slopes to “take a little off of here, and put it over there”. In the same way that people put on makeup to coverup blemishes – these snow-farmers and groomers do the same. Thin coverage and bare spots become at least a temporary thing of beauty.

The groomers worked their magic on the slopes overnight and this morning, returning a groomed corduroy from the soft surface we finished the day with on Saturday.

…and we’re going to need more makeup in the coming days. If you thought Saturday morning was mild at 40° or so across the region – try on mid 50s and even some 60° readings this morning. It is some 25° milder than this time on Saturday morning.

Expect variable conditions and soft snow today, no matter where you ski or ride. Also, while there is really good, side-to-side coverage on the slopes, there will also be thin coverage and some bare areas at every ski resort in the region.

Be sure to check out the SNOW REPORT for all the details.

The mild temps are slowly (understandably) forcing ski areas to at least temporarily shut down a slope of two from what was available on Saturday. Additionally, some ski areas have already shut down night sessions – so, again, check the SNOW REPORT.

Years ago, when I was living in Columbia, South Carolina the only skiing I did was on Lake Murray or Wateree. It is kind of funny when I think about it because when I waterski, I slalom. Kind of odd to think about why I prefer two skis on the snow.

I loved snow, but just never had the thought of going skiing. Even so, I clearly remember hearing the Southeastern Ski Areas ‘whatever day’ snow report on my favorite radio station. Every morning some guy with a good radio voice would share the base depths and slope opening for every ski area in the region.

So today, I pay homage to that long ago (and lost) bit of reporting with my version of it, using our LIVE SKI CAMS. (I was tempted to do in my best, booming, radio voice – but I couldn’t bring myself to do it. Haha.)

There was lots of tshirt skiing & snowboarding happening on Saturday and as this part of the season comes into play, when the sun is baking the snow and painting exposed ski red – I begin receiving SkiMails about climate change. Several hit my inbox evidently in response to my sharing of base depths and how some ski areas saw a drop of two feet in base snow within the last couple of weeks.

Some who emailed me shared some comments recently released by someone with the NSAA that ski resorts could lose 10%-50% of their season as milder temperature will continue to shorten seasons.

Several gloomers and doomers cited the fact that none of our resorts had seen normal/average natural snowfall this season.

I won’t baited into using this space today to go off on any rant. Suffice it to say that we will see yet another 2-3 weeks of skiing and snowboarding across our region – which is as normal as it gets. Thanks to cold enough temperatures, and the HUGE financial investments in snowmaking equipment – we’ve experienced yet another successful ski and snowboarding season.

Has it been less snowy than usual? Yes. All I can say is, “Wait until next year.”

It sure is looking like this season will end up being a GOOD season for most ski areas of the region…and most would give it a strong B grade. A few might call it REALLY GOOD…preferring to up the grade to a B+. Only a couple might grade it as a poor one (thinking perhaps Wolf Ridge and Sapphire).

As some of my skimailers sent – we’ve certainly not seen a normal, natural snowfall season. I will share those numbers over the next couple of weekends. However, here’s a hint at the data.

Most of our ski areas will end up as having well-below-normal snowfall totals this season. A couple examples would be Beech and Sugar mountains with around 46″ on the season to date. They each typically hit 78-80″. If we don’t see a significant snowstorm before the end of the season (and there isn’t one in sight) then the 2021-2022 snowfall tally of 46″ WOULD make for the least amount of natural snowfall since the 2007-2008 season which saw 38″ of snow.

It should be pointed out that TWO of the next THREE seasons saw from 122″-130.5″ of snow which was up to 38% more snow than average. So again, wait ’til next year…or two.