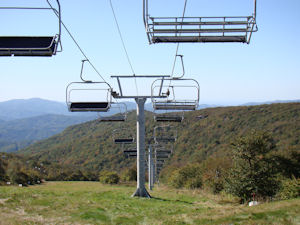 10/13/09– After receiving the new auxiliary engine for the Oz Quad, the finishing touches started on the lift. The lift conversion began last summer and the entire staff is excited to have the lift open for the start of the 2009/2010 season. Prior to the addition of the new Doppelmayer Quad conversion, the slope had received new snowmaking pipe and 80% of the terrain was covered with electrical boxes for snowmaking efficiency.

With the season just around the corner, several other projects are nearing completion. The new private season locker room will feature over 90 individual lockers with changing rooms and restrooms. The room is located in the middle of Beech Tree Village and has easy access to village amenities and the high-speed quad. Beech Mountain continues to make annual improvements in snowmaking and has invested in new equipment for the 2009/2010 season. Here is a summary of some of the other projects for the upcoming season:

Keep checking in for updates as the season approaches. There are only 18 more days to get the Super Saver Season Pass, $350.00 for an unlimited individual season pass.

Previous Post
Got $270,000? That will buy you a Ski Resort in Montana! It’s True!
Next Post
Read the FIRST TRAX DAILY NEWS below as Accuweather’s 2009-2010 Winter Forecast Predicts a COLD and SNOWY Winter for the Southeast and Mid Atlantic