Recess is hosting an Intermediate to Advanced Contest, consisting of sick rails and a tight stylie rhythm section. All ages and ladies are encouraged but it will be a more intermediate to advanced course.

Advanced snowboarders and skiers will jam it out for 45 minutes. For ski, this will decide who 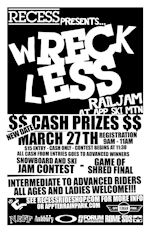 ends up in first, second, and third. Depending on level of riding, there will be 5 to 8 snowboarders chosen to go to finals. Finals will be a gnarly game of SHRED on one of the features, probably a down rail. The tricks will be decided by a set of RECESS Snow Dice!

If you do not understand how a game of SHRED works, here is how it will go down, Recess style. Think of it as a game of HORSE but with snowboard tricks. We will roll the dice which will in turn tell us what trick has to be done. Each rider will have to do that same trick. If you do not land the trick you will get a letter. Once you have gotten SHRED, you will be out. The last one standing will be the shred master and take home a lot of cash from the snowboarders contest entries.

Dice: There will be 4 dice that are rolled. Each dice contains a different element. I can’t lay it all out there because it is a Recess special recipe. Just be prepared to throw down anything from a board slide to a switch backside 180 nose press.

Cash Money!!! All riders will pay $15.00 to enter the contest. CASH ONLY for entry. All the money from the entries will go to the first, second, and third place winners in advanced snowboard and advanced ski. There should be a solid amount of dollars up for grabs!! The snowboard cash prize will consist of all the snowboard entry money and the ski cash prize will consist of all the ski entry money. So if we have 50 snowboarders sign up and 25 skiers, that is $750.00 available for snowboard and $375.00 available for skiers. Sick!!! Roughly 75% of the dollars will go to first place, 15% will go to second place, and 10% will go to third place. So if we use the scenario above with $750.00 total cash available for advanced snowboard, it would roughly break down to first place with $560.00, second place with $115.00, and third place with $75.00. The Ski cash prize would look something like first place winning $280.00, second place $60.00, and third place $35.00. How freaking amazing is that?! So the more people that come and shred, the more money in the pot!

The course will be super fun and consist of rails and whoopdees of epic proportions. Just come ready to get shradical. Nothing too gnarly, just some fun rail lines and maybe a few sick lips for a little hang time. This is definitely going to be a laid-back, super good time; you just won’t see any juice boxes out there.

Judging: For the jam session, the judges will be looking for consistency (this does not mean the same trick over and over; repeated ticks on the same feature will not be counted), style, and trick difficulty. They will be tallying tricks landed. How many tallies or if any are given per trick is up to the judges. A super basic trick may not even get a tally but it can, depending on the steeze and what feature it is done on. Something super sick might get 2 tallies or even 3. That will be up to the judges. Keep in mind that just because you think you did a trick doesn’t mean that you did. Not making it to the end of a rail does not really count. Pressing half of a rail does not really count. Pre spins and tech 90 landings do not really count. So the judges will be hawking the course and the top riders will advance.

For judging the game of SHRED, the tricks will be decided by the dice. Riders will have to do the trick that they are handed. Pretty simple here; the trick will either be done or not. There may be some wiggle room for the super difficult tricks, but for the most part, winning will come from landing the exact trick that is set. If no one from the entire group lands a given trick, no one will receive a letter for that one round.

Registration and Start Times: Contest is scheduled for March 28th. Registration will be from 9 a.m. – 11 a.m. Contest will start at 11:30! The earlier you get there, the more warm up time you will have. This is going to be a super sick time so I hope to see everyone there!