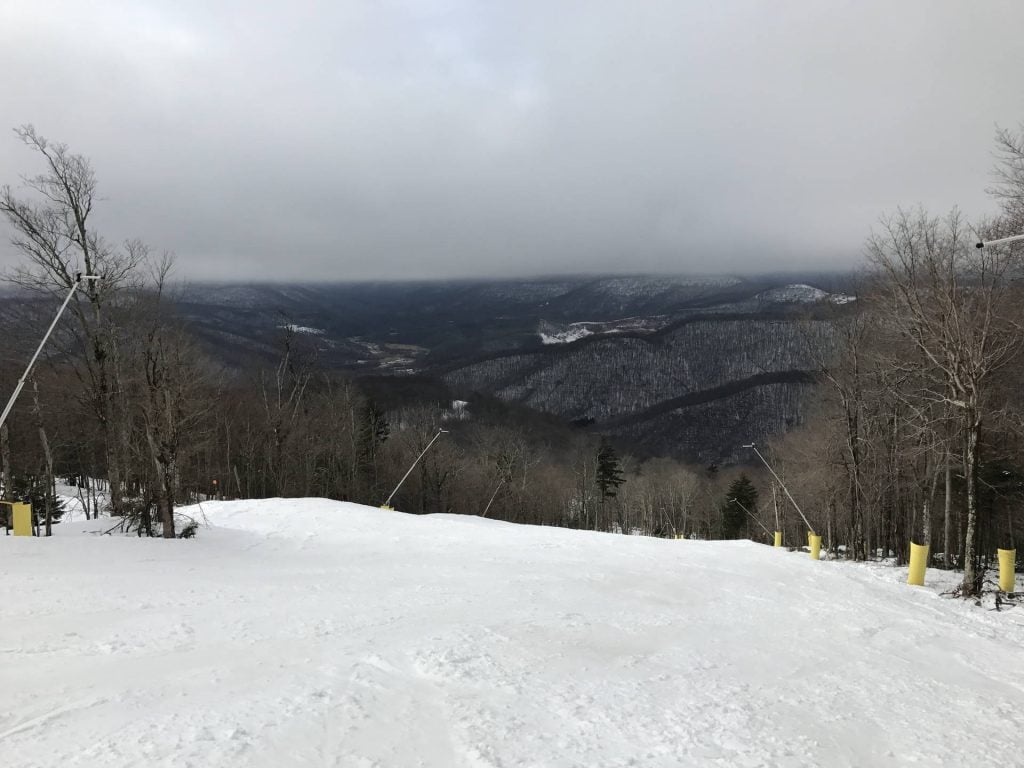 If you’re like me, then today is the first day back to work after the New Year holiday.  I don’t know about you, but this weather is making it a little harder to get back into the swing of things.  It sucks!  Luckily though, we only have to deal with it for one more day before we see our first real sustained, arctic outbreak of the season.

Temperatures this morning range from the 30’s at the Virginia resorts to 55 degrees at Ober Gatlinburg in Tennessee.  Combine that with some heavy rain that fell overnight and this morning and you get a bunch of webcam shots that look subpar and not even worth sharing.  They are full of grey, dreary looking conditions right now.  I’m looking at CoCoRaHS reports and it looks like the resorts generally saw anywhere from 0.25 to 0.65 inches of underdeveloped snow.  For instance, the report from Beech Mountain shows 0.42″ of rain in the last 24 hours.  Massanutten is showing 0.59″.  No bueno!

As a result of this recent rain, we’re seeing some of the base depths drop a few inches.  It’s nothing too drastic but beware of thin areas at some of the resorts.  One trend I am seeing this season so far is that more resorts than usual are reporting their base depth as a single number.  That is awesome.  Mike and I like to rant from time to time about how ridiculous some of the numbers can get during the season, so it’s good to see more resorts this year using a single number which to me represents a true average.  A 40-120″ base is just goofy and the high end of that range is usually a single spot on the mountain underneath a snow gun.  And even then 10 feet of snow is pushing it.  So kudos to Wolf Ridge, Snowshoe, Massanutten, The Omni Homestead, Wintergreen, and Wisp for going the route of a single number.

Up and Down Weather

I was talking to my buddy yesterday and he remarked how much better a certain resort looked just 48 hours previously.  That cold shot just before New Year’s allowed for about 2 days worth of snowmaking and it is nuts what that can do for a ski area.  Combined with natural snow for some resorts and most visitors probably didn’t even realize just how lean of a year it’s been thus far.  It was a winter wonderland out there!  Yesterday and today, not so much.  Check out the 72 hour difference at Beech Mountain below.

I’ve said it before and I’ll say it again, I can’t imagine being the general manager of a ski area here in the Southeast.  I already go through extreme highs and lows looking at weather models from run to run and I’m just a powder hound.  If my job and a whole business were affected by it, those emotions would be compounded exponentially.  It would give me a stroke I think.

Alright alright, enough with the debbie downer talk of rain and what not.  Let’s look ahead to some exciting stuff, and that would be the cold and snow that is about to move into the region.  I’m not talking about a brief cold shot here either, I’m talking many days in a row of cold.  Mike and Brad Panovich talked about it yesterday and we are still on track for it.  Beginning tomorrow, we are looking at at least 5-6 days in a row of sustained cold temperatures for every ski area in the region.  We cold even some around the clock snowmaking during that time period for many of the resorts as highs won’t get above freezing until next week!

All of the cold shots we’ve had this year have been 48-72 hours in length, so imagine how good it is going to look with 5+ days of snowmaking weather!

Even better, it looks like some natural snow is also possible.  Many of you have already heard the buzz about possible winter weather off the mountain as well and that is still a possibility, but it looks fairly certain that the ski areas will be seeing some snow.  How much?  Well, that is still up in the air and nobody is putting any numbers out there yet, as they shouldn’t be with the uncertainty of things.  Like I said though, they should see some appreciable snowfall.

If you have plans to get some skiing and riding in this weekend you are in luck.  The cold and snow should make for a fantastic weekend and the rain yesterday and today will be a distant memory.  We should also see more terrain opening up with the extended cold.  Wisp Resort is already looking ahead based on this comment on their snow report…

Wisp’s Mountain Ops Team plans to make snow on the currently open terrain with thin cover then begin snowmaking on unopened terrain in hopes of having all slopes and trails online for Martin Luther King, Jr. Holiday Weekend, January 13 – 16.

…and Snowshoe Mountain has already announced they are opening more trails for the weekend.

I expect we will see other resorts open up some new terrain by Friday.  Exciting!

It’s going to be a fun week once we get through today.  Stay positive!  And think cold and snow!