Temperatures Fall Throughout the Day Today and Snowmaking Resumes Tonight! 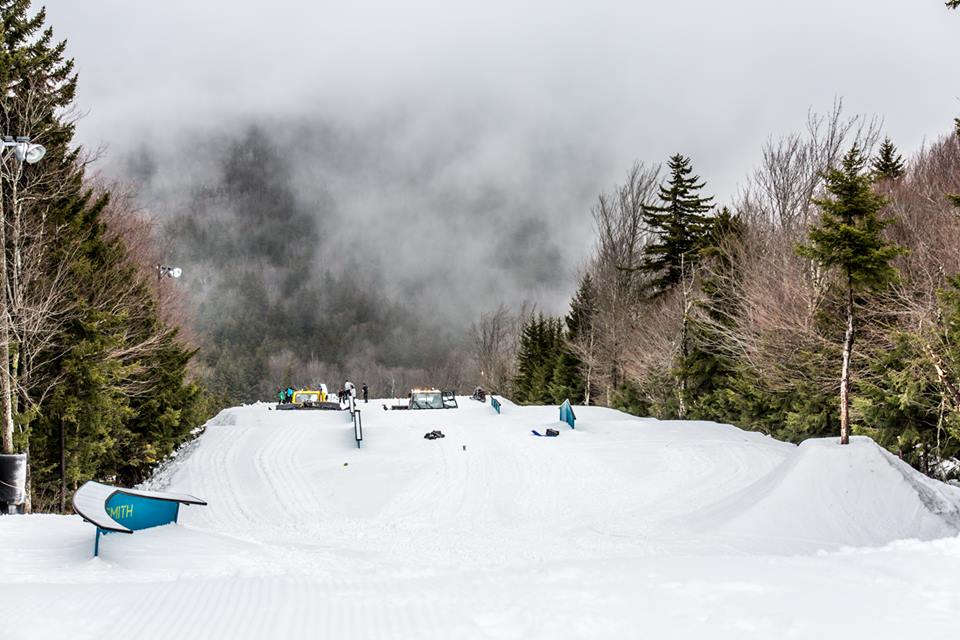 Well, we made it through.  I’m referring to this recent stretch of warm, wet weather that has plagued the region for the past several days.  After a fantastic finish to 2016, 2017 came in with less than a bang in terms of skiing and snowboarding conditions.  Yesterday was another cloudy, dreary, wet day and the snow reports this morning reflect those weather conditions as we’re seeing many resorts that are reporting several inches lost off of their base depth.  A couple of resorts also lost a trail or two as well.  A few more days like Monday and Tuesday and we would be in a bad place!

Luckily, the warmer, wet weather is done with for the time being.  Get on outta here!  A cold front is making it’s way through the region right now and it’s about to get cold for the foreseeable future.  It appears to have already passed through North Carolina, Tennessee, Maryland, and West Virginia.  All of the ski areas in those states are generally already in the 30’s this morning.  There’s even a few snowflakes showing up on the Canaan and Snowshoe cameras.

The Virginia ski areas are mostly in the 40’s right now but that should change shortly.  The title of this post referenced snowmaking resuming tonight, but in all honesty it might actually fire back up this afternoon.  In fact, Sugar Mountain’s website shows them as already making snow this morning.  I have no idea how though, as it’s 38 at the base and 34 at the summit with 96% humidity.  Maybe they got too excited and clicked a button a little too soon.

As I talked about yesterday, the upcoming 5-6 days is going to be our first real prolonged cold outbreak.  At most of the ski areas, once the mercury drops below freezing today, it won’t get above that mark until Tuesday of next week!  ICEBOX.  For instance, here are the forecasted high temperatures for Snowshoe over the next 5 days.

It’s gonna be chilly at Wintergreen over the next week!

LAWDY.  It’s going to be a cold week ahead filled with lots and lots of snowmaking.  Conditions have been pretty good this season so far with only 2-3 day windows of cold, so this 5+ day outbreak is going to do wonders for snow conditions.  Several of the resorts have referenced the cold and snow in their remarks.  Everyone is excited!

Everyone is also excited about the potential for snow.  Well, meteorologists are probably terrified at the moment due to the uncertainty in the forecast.  It’s a high bust potential event right now, especially for locations off the mountain.  Brad Panovich has quite the forecast ahead of him for the Charlotte area!

The ski areas in the region all should see at least a little bit of snow Thursday night and Friday.  The potential is there for more though, especially in the North Carolina mountains, based on the track of a system.  One of the computer models, the GFS, has it further south and keeps the heaviest snow across South Carolina and Eastern North Carolina.  The Euro model brings it further north and shows a moderate snow event for the resorts in North Carolina.  I like the latter and am hoping so hard for a powder day at Beech on Saturday.  SO HARD.

To explain just how uncertain the forecast is right now, the GFS model has 1 inch of snow for Boone, NC, which is close to Appalachian Ski Mountain, Sugar Mountain, and Beech Mountain. The Euro model has 6 inches.  Good luck to all the meteorologists with that!  I was texting my friend last night and mentioned to him how Charlotte could end up with more snow than the Boone area, which would be incredibly odd but is definitely possible.  It should be fun to watch how things unfold.

Make sure to check back here daily as we’ll keep you updated with the snow, but regardless it’s going to be COLD and we’re about to see conditions do a 180.  Hopefully this is the kickstart we need to really get things going.  Many resorts have struggled to get even 50-60% of their trails open.  This cold snap should help with that and it’ll be interesting to see how things look not only this weekend, but into next weekend as well as it will be the oh so important MLK holiday.  A couple of resorts have already announced plans for trail openings NEXT weekend, and that definitely looks feasible at this point.

Just a couple of things before I call it a day…here’s a nice article talking about the good start to the season for the West Virginia Ski Areas.  Our own Joe Stevens was interviewed as a part of it…

And finally, if you haven’t noticed we updated our events page a few weeks back and there are a ton of fun events at all of the resorts to take a look at.

This weekend in particular has a cool event taking place at Beech Mountain Resort.  The 3rd Annual Winterfest Beer Festival is going down on Saturday.

Each January, Beech Mountain Resort hosts the Winterfest Beer Festival the first Saturday after New Year’s Day. The 2017 edition takes place Jan. 7 and fills both levels of the Beech Tree Bar & Grille with more than 50 ales and ciders from North Carolina craft breweries and cideries. It’s a fun and festive way to celebrate winter in North Carolina’s coolest town.

You can view more info about it on their website…

That is all for today.  The next couple of days should be exciting!  Plenty of cold and hopefully some snow to talk about!