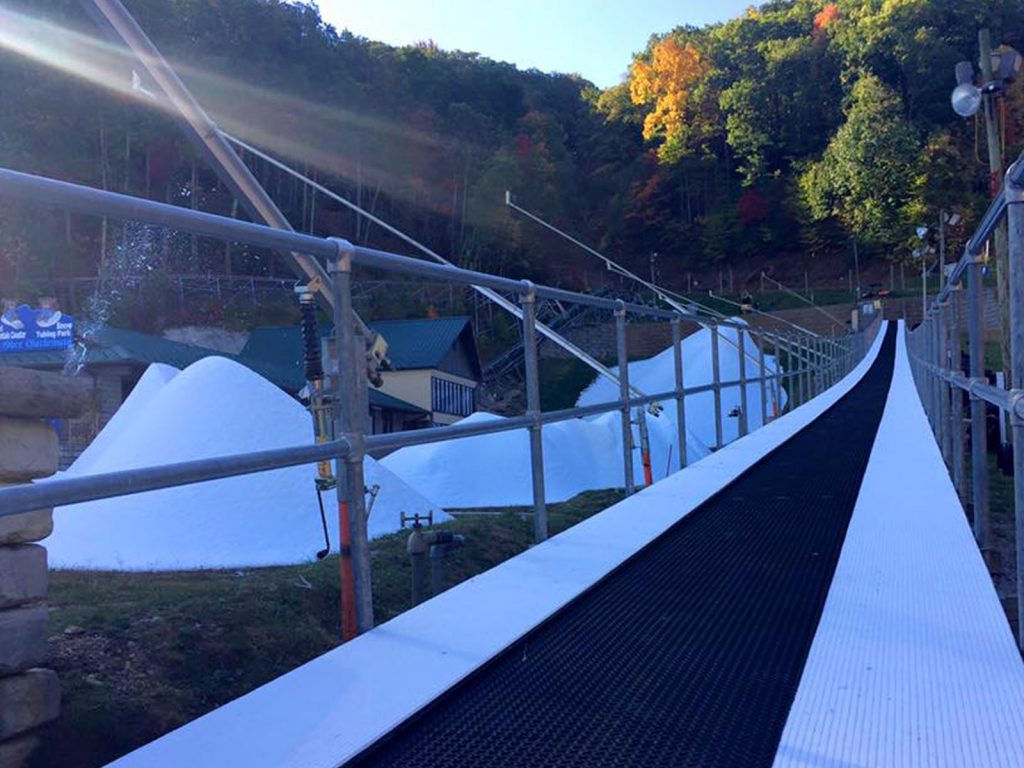 Despite temperatures in the 80’s, Ober Gatlinburg is showing signs of winter magic.

Ober Gatlinburg has started getting their tubing hill ready for the 2016-17 – including building the hill with Snowmagic.

“We use a process that was developed by SnowMagic,” Ober Gatlinburg Director of Marketing and Sales Kate Barido said. “They have a system that creates a snow product in an internal environment – basically like a large slushy machine. It makes snow crystals. Right now, we have enough to make 300 tons in a 24-hour period.”

The system has helped give Ober Gatlinburg a security blanket of sorts – as Mother Nature isn’t always kind to the Tennessee resort.

“We are really-invested in that technology because we cannot depend on natural snowfall and sometimes we can’t depend on cold weather to make the snow,” Barido said. “We use the Snowmagic on our tubing hill and that has been very successful.”

In fact, the resort only lost two sessions last Christmas season due to the abnormal temperatures and weather pattern that plagued the southeastern resorts.

Ober Gatlinburg also looks to put the magic on some of the slopes, but not as a snow substitute.

“We just purchased a 150-ton unit and it was installed on Cub Way,” Barido said. “The sole goal of that is to reinforce the snow at the top of the red lift and the major trouble spots we have when the sun comes over the mountain – there is a couple of spots that just get beat with the sun and we see a lot of melt.”

Barido added that it is a great way to fortify their base if the snow coverage isn’t great due to unfavorable temperatures.

It has been a busy summer season at Ober Gatlinburg. The resort has purchased a new groomer, installed a mountain coaster, increased snow making capacity and added a new magic carpet. Perhaps the biggest improvement, however, is a new online ticketing system.

“We just started selling our tickets online, that is one of our major upgrades,” Barido said. “It has been great to offer it so people can start planning their vacations. Prior to that, if you wanted to come here and go snowtubing, to be sure you had tickets you would have to come up physically three days before you were going tubing. Now you can buy them online which is amazing.”

Ober Gatlinburg is set to open for tubing on November 19 with the Black in Blue Rail Jam set for Nov. 18. No opening date for skiing is currently set, but Barido said they would start making snow once weather allows and that they could be open in 48-72 hours.

Previous Post
Snowshoe Resort Gets First Snow of the Season!
Next Post
Some Season Pass Math for 2016-2017; Hint One Equals Eight