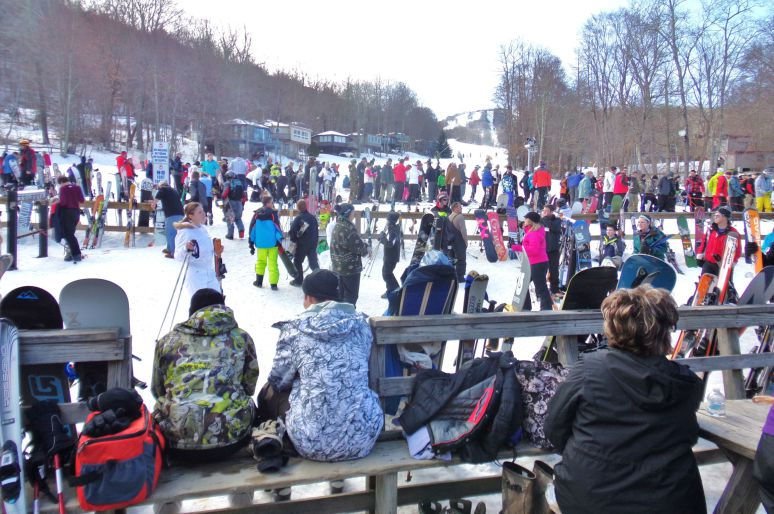 Today is the unofficial “start” of the Christmas-to-New-Year ski getaway period. I’m headed to West Virginia for a little R&R&R. In case you don’t know what that is, it is “rest, relaxation AND recreation”. I’m being joined by family, friends and friends of my family – twenty-one in all who will be coming and going throughout the week ahead. Of course, as this is also normally THE BUSIEST week of every ski season…I’ll hopefully be joined by thousands of like-minded, snow-loving fans of skiing and snowboarding.

Of course the selfish side of me would love to have the resort to myself, but that wouldn’t be good for business. Traditionally a normal-attendance, Christmas-to-New-Year week makes up as much as 20-25% of the revenue generated each season for many ski resorts.

Some of my family are headed to Vail on Tuesday. I’ve been getting powder alerts on my Epic Ski App nearly every day and they are open with 193 of 195 trails, 5200+ acres of terrain and an average 36″ base. I’ve had the pleasure of making that trip with those kind of conditions on a couple of occasions in the last few years – and that is special when it all comes together like that. They are looking at a forecast of lows in the teens and highs in the 20s to low 30s every day with some additional chances of snow.

I’m Dreaming of a Blizzard as Well!

If you haven’t had a chance to read David McCue’s latest post – it is a good one. He calls it a “Storm Chaser’s Lament”.

I’m right there with him. I’ve found myself including it in my prayers of late. Praying for snow is tricky, because you have to keep in mind that there are many people who have a terribly difficult time when we DO get deep snow. I also remember a funny story about a guy who wrote about praying for snow and then when his prayers were answered in abundance – it wasn’t long before he began to pray that it stop…after three months with snow on the ground.

Right now, I’d just love to see NORMAL SNOWY PRECIP NUMBERS across the region. Although the West Virginia resorts have seen up to 21″ of natural snow this season, that 21″ at Canaan and Timberline is only about ONE-HALF of normal, natural snowfall to this date on the calendar. As crazy as THAT number is, the North Carolina, Virginia and Tennessee ski areas have only seen 1-3″ of snow to date.

So I’m dreaming of some serious snow! Our buddy, Joe Stevens posted his latest “Snow News is Good News” column and he alluded to the fact that “the switch flipped” around midnight on January 1st last season and then we had 102″ of snowfall in the West Virginia mountains for the rest of the season. North Carolina’s Beech and Sugar mountains saw 65″ of snowfall from January 1st through the end of March.

So Joe is correct about how the pattern can flip and I’m hoping it happens and I wouldn’t mind it if the switch starts around Thursday of this week! By the way, you guys can read Joe’s latest post “Feeling Thankful”.

The Boy Scout Motto is Best When Skiing or Riding in Inclement Weather.

Okay so you’ve laid down some serious cash for your ski getaway and you’re headed to your favorite ski resort for the week ahead and you’ve had a look at the forecast and you see 2-3 days with the possibility of rain. Timing is everything when you’ve planned a ski getaway and SOMETIMES you’re going to catch a forecast that includes a bit of under-developed snow. Thankfully the forecast for the week ahead looks pretty decent. After a Saturday and Sunday that was wet and raw across the region, we should see things clear up a bit as we get to Wednesday AND the temps will turn cold enough for snowmaking at most resorts by Wednesday and Thursday night. There’s even decent chances for some good snowfall for later in the week. However there’s also a chance for some additional wet weather especially NOW through Tuesday.

So you have a couple of choices. Obviously you could simply avoid the slopes and head to some alternative off-mountain entertainment. OR you could actually embrace the wet and try hitting the mountain anyway. Of course we’d all prefer pristine, winter-wonderland snow all week, but sometimes you’re just going to see some wet stuff. I’ve had some of my best days on the snow – in the rain.

They say there is a thin line that separates love from hate, and this can be especially true as it relates to the weather conditions at ski resorts. A couple of measly degrees separate fresh snowfall from dreaded rain. Heck, I have made run after run down a mountain in rain at the base and snow at the top – and vice versa.

I’ve also had some of my most surreal skiing moments in the rain. Don’t misunderstand me – I PREFER to ski in some nice snowfall. However, rain riding can be super fun! There are no lift lines, nobody on the mountain compared to those otherwise slope-crowded days. On top of that – the snow is softer and more fun to carve.

In my own experience – there are two major ingredients to having fun skiing in the rain. The most important is to BRING A GREAT ATTITUDE. Don’t sweat the wet.

The NEXT most important thing is to always have good outerwear. A good, water-proof outer shell is great to have in your arsenal to compete against the elements. You can usually find something at the on-mountain ski shops to suffice. If nothing else a good poncho will do the trick. However, you’ll ultimately just need to embrace the wet – because even with the best, most expensive Gore-Tex gear – you’ll eventually get wet.

There are many GLOVES that are made to work against wet weather but whatever you do choose to wear in terms of hand protection – keeping your hands dry is key to a good day.

There’s an old adage among diehard skiers and snowboarders and it is basically – a bad day on the snow is better than a great day off of it. While that might not be true in every instance…it does ring true in theory.

The bottom line is if you’re at the resort and it’s raining – TRY going out for a bit and you might just find that you love playing on the snow – even when it’s raining.

Enjoy your day on the slopes if you’re blessed to be able to today.

Previous Post
Bah and Humbug! A Storm Chaser’s Lament – by David McCue
Next Post
Just Some Rainy Day Updates from the Mountains. Cold and Snow are in the Forecast!