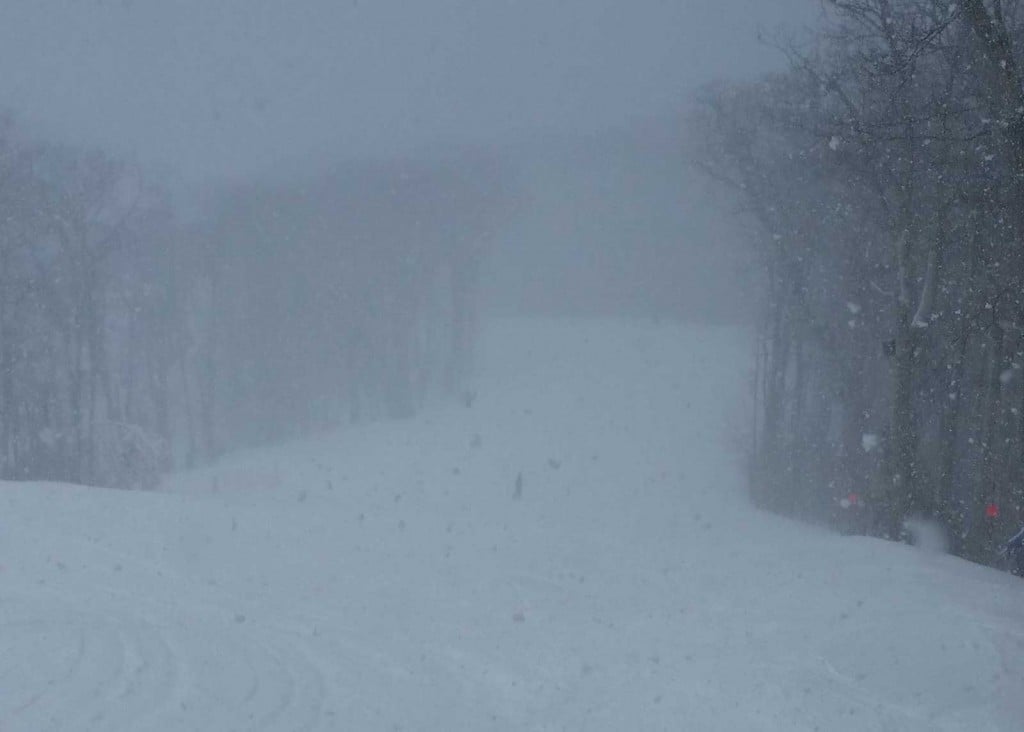 The Northwest Flow snow train continues to chug along today.  It started to snow during the late morning hours yesterday and continued into the afternoon and overnight.  I was scanning the webcams in the afternoon yesterday and found that some big ole fat flakes were falling up at Canaan Valley.  It was beautiful.

We have a number of resorts that are reporting 4-5″ of new snow, which in my mind qualifies as a mini-powder day for here in the Southeast.  Just for future reference, here is my personal scale in terms of how I describe snow events (for the Southeast anyways).  For me, 1-3″ is a light snow, 3-6″ is moderate, 6-10″ is significant snow, and anything double digits and above is a dump.  So some of today’s snowfall numbers falls into the moderate snow range on my scale.  Let’s take a look at those numbers.

A couple of things…the winner so far is Beech Mountain.  I was a little surprised to see the 5 inch number this morning so I checked CoCoRaHS site and it verified, so indeed they have seen 5″ of snow.  Beech is always a big winner when it comes to Northwest Flow snow events due to their high elevation and their location right near the Tennessee border.

Second, a few of those numbers I posted have unverified in parentheses beside them.  That’s because those resorts haven’t posted snowfall numbers and I had to get those numbers elsewhere.  That is a big pet peeve of mine and I think I’ve mentioned it already once this season.  It’s crazy to me that some of the ski resorts don’t post snowfall numbers!  App Ski Mtn generally never posts numbers which is hugely frustrating, but they are saying 2″ of new snow on their site, but I believe that is them referring to manmade snow which Mike already discussed over the weekend.  Cataloochee updates their report at night, which is weird, so their snow report only says a trace of snow and does not include snow that fell overnight.  Wintergreen and Homestead are generally good with snowfall numbers, but I think they are simply running a little late this morning.

As soon as I got done doing the First Trax report yesterday morning, Brad Panovich sent in his latest video forecast.  I posted it up on the site yesterday but here is what he was saying as of yesterday morning.  Nothing much has changed.

I love how he uses the phrase “pow pow”.  Spoken like a true snow lover.

As he talked about, another surge of moisture and cold air moves in today.  The snow showers will continue throughout the day so it should be fun to watch on the webcams.  We won’t see any nuking snow per se, but it will add up over time.  I have a feeling tomorrow’s snowfall numbers will probably look pretty similar to today’s.

One final thing about he weather today and I know I mentioned it yesterday, but it is COLD.  As of this morning the temperature was in the single digits at Beech and the wind chill was in the negatives! 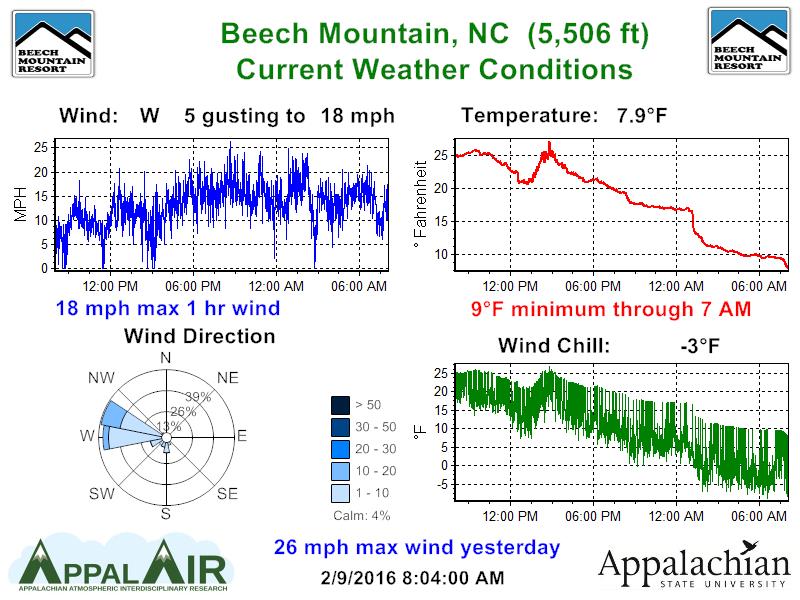 It’s not quite as cold at the other resorts, but it’s still chilly nonetheless.  Tomorrow looks even colder!  If you look at the SNOW REPORT page you’ll also see that a lot of the resorts are making snow and will probably be continuing to do so over the next few days.  President’s Day is this weekend so they need to bolster slope conditions as much as possible.  The cold, snow, and snowmaking will make for a terrible experience if you aren’t prepared properly, so make sure to bundle up!  The more layers the better!

Since I’m in a good mood, let’s give away a pair of lift tickets to Beech Mountain that are good any day of the week.  All you have to do is send us a photo on social media today or tomorrow from on the mountain.  Simply post it to our Facebook page, or tag us on Twitter (@skisoutheast) or Instagram (@skisoutheast) so we can see it.  The best picture will get two lift tickets to Beech, so let’s see those photos!

Snow Day for the Kiddies 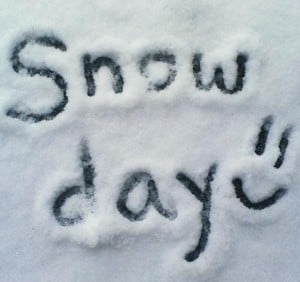 A lot of the schools in the mountains are out today due to the snow.  Many ski areas, especially in North Carolina, have discounted lift tickets for students and teachers when schools are out.  So if you have kids and some free time today (or tomorrow probably too), it’s a great opportunity to get some turns in for cheap.  For instance, Wolf Ridge offers $15 lift tickets.

Let it snow! 4+ inches of fresh new natural powder on the mountain! That means Snow Day Special for students and teachers – $15 tickets, $7 ski rentals, $15 snowboard rentals. It is also Two For Tuesday! Buy one ticket, get one free!. There is no excuse for not joining us on the mountain today! We look forward to seeing you on the slopes!

As I said, most of the North Carolina ski areas offer something similar and I know Massanutten has a snow day special as well, so check the ski area websites or give them a call.

One final note, if you are thinking of heading to Wintergreen and are trying to call them, their phones are current out of service.

Just wanted to give a heads up about that.

Everyone enjoy the snow today!