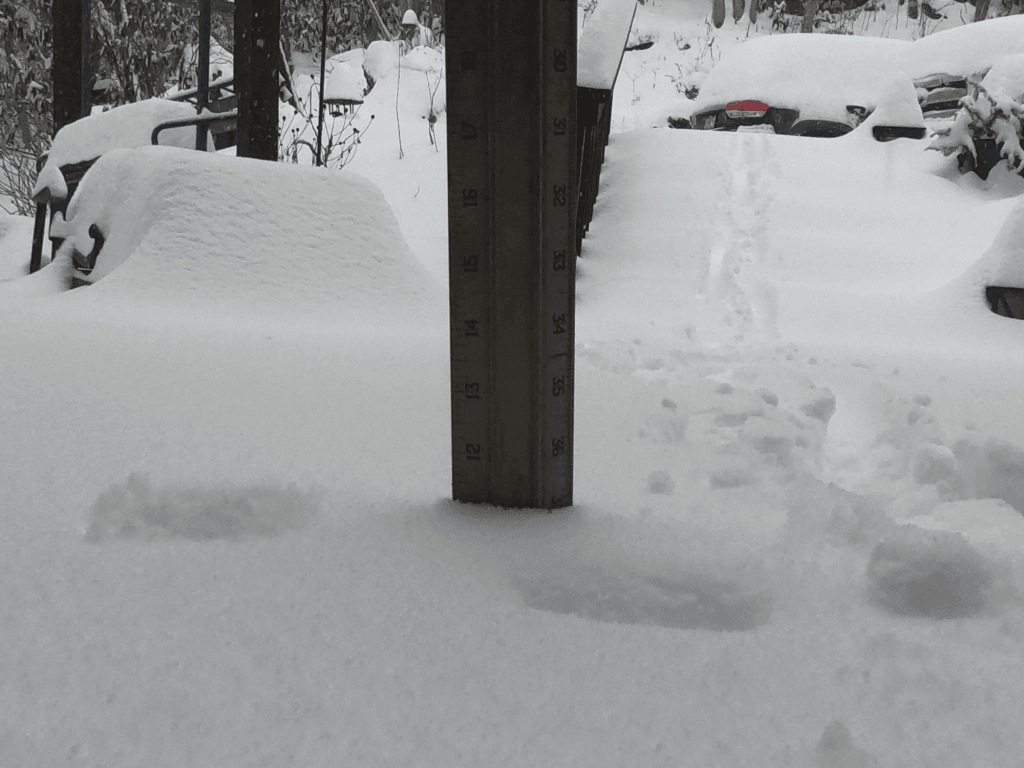 I’m going to call this a “Natty Lite” Snowfall. Every time I woke up last night (yea I was excited) and looked out, the flakes were so fine. I’ve seen far heavier snowfall that amounted to less on the ground – many times. However, this sugar-snow has dumped 11″ right outside more door and no question more a bit away from my front door!

That is our POD (for right now) this morning. Click to Enlarge!

It is still coming down and the forecast is for another 9-13″.

By the way, I just received one of those phone notifications that ONE YEAR AGO today we had 7″ of snow on the ground.

A Lot of Photos and Videos Coming Your Way

I wanted to get the snow reporting posted as well as resort and slope openings and you’ll find that content below. If you don’t see your favorite ski hill mentioned, you can find all the deets via our SNOW REPORT.

Crazy to see ski areas in North Carolina catch up with snowfall on the season with resorts up into West Virginia.

Let’s get right to the numbers this morning:

Cataloochee Ski Area – 22° and Tammy reported in with 14″ of new snow and ALL 18 of their trails open PLUS the natural snow trail “The Meadow” making it 19 trails open for day sessions and it is still snowing! The CoCoRaS reporter closeby reported 16″ of snow. Bear in mind that it began snowing there early on Saturday, whereas the High Country didn’t get in on the act until 9:30pm last night.

Appalachian Ski Mountain – 20° – 10.5″ – I don’t know what’s been going on with App this season, but they rarely update their snow report overnight or early morning like they’ve done in years past. However, our official reporter from there in Blowing Rock IS reporting 10.5″ of new snow. App is open with at least NINE trails for today and tonight.

Beech Mountain Resort – 20° and they are reporting 8-12″ but I can tell you that they are at 12″ according to our new reporter from atop Beech. That takes Beech to 23.5″ on the season with more big snow coming today. They are playing for day sessions only Sunday on 9 trails.

9:06am update: Not seeing the new quad #5 running early. They MAY be delaying their open. They do show Quad #6 Open.

Snowshoe Mountain Resort – 15° – made snow and look in mid-season form despite the fact that this particular storm (Diego) did not put any new snow on the ground. They have a region-leading 25 trails open. That INCLUDES CUPP RUN and UPPER SHAYS!

Snowshoe posted, “Hats off to our operations team for the incredible amount of effort they put in over the last 6 days to get that side of the mountain open. This is the earliest we’ve been skiing the Western Territory in a decade. There is a chance we may see some snow showers today if the big storm down south edges north just a little bit. Fingers crossed! Please use caution as snowmaking may be in progress on some open slopes today.

Lift tickets and beginner lessons are FREE to WV residents today so come on up and take advantage!”

Massanutten Resort – 23° and under 1″ of new snow, but 2-4″ in the forecast. They made snow and added another open trail for today! 3 of 14 open for day sessions along with 8 lanes of tubing to play on.

Omni Homestead Resort – 19° – and snowing although they have seen less than one inch of snow so far. They ARE making snow to get open soon.

Wintergreen Resort – 15° – They saw about 1″ of snow and it is white-out there this morning. They ARE OPEN with 7 slopes and trails!

Wolf Ridge Resort – 24° and 8″ of snow from the storm. Their camera is out and they have not updated a report, so they MAY have a power outage. We’d suggest to call ahead. They were open with 4 trails on Saturday.

Bryce Resort – 24° and they are not reporting any natural snow, but we are pretty certain that the Shenandoah County, Virginia ski resort picked up a couple of inches of snow. They are open with Bootlegger, Red-Eye, Little Nip, and Bunny Slope open 10-4 until the 15th. (Hey, Bill Nabers, could you start texting me snowfall totals?)

Winterplace Resort – 23° – They are making snow and it IS snowing pretty hard there this morning. They are planning to open soon.

Wisp Resort – 19° – They should be open…as great as things look there. A ton of people on social media agree. Wow! They are targeting to open on December 14th.

Sugar Mountain Resort – 20° – I know that we are no longer “talking Sugar” on FirsTrax reports, as they are not a SkiSoutheast member resort, however I had to chime in on Sugar this morning because they are UNDER REPORTING snow this morning! They are reporting 9″ this morning and 19.5″ on the season and yet our new, official, snow reporter (located at the top of Sugar) reported in with an official 11.5″ of snow so far from Diego and takes them to 22.5″ on the season.

Ober Gatlinburg – 30° – They are getting some snow right now, but literally just an hour drive from Cataloochee (where they saw 16″) Gatlinburg has a TRACE.

“We are working on getting the slopes open ASAP!! The weather has been good for snowmaking, but we haven’t had solid blocks of below freezing temps… that being said, we will be hoping for continued freezing temps through this cold snap coming after this weekend. … hoping this weekend’s temps stay low and we get snow and not rain!”

Timberline Resort – 18° – No new natural snow, and 25.8″ on the season. Opening Day December 14th. Heard from Tracy Herz on Saturday and we’re hoping to get the camera LIVE soon.

We will post a lot of new photos as the day goes on.

We’d REALLY LOVE IT…if you would: (Any JOIN will get you enlisted in all of our contests and giveaways!)