We lucked out! Our first day of skiing this season was glorious! The sun was shining most of the day with no wind and air temperature about 40°. 65% of the resort was open, or 11 trails and 6 lifts. The conditions were listed as packed powder and groomed, and they lived up to their billing. When Charles and I were there, there was no ice or slush. That probably changed later in the week, but good conditions will come back with approaching cold and snow.

We actually tried to get up on Friday, opening day. But a surprise snow squall caused ice and accidents on the highways, which had not been salted. We turned back after a half an hour. This shows, if you really want to make it to Liberty Mountain, you might consider staying in their on site hotels. You can often work out package deals for lodging, lifts, and lessons and rentals, if needed.

At Liberty, when we were there some double blacks were open – Vertigo Park, West Side Park (with 7 rails and boxes), Upper Ultra and Upper Blue Streak. Charles checked out the black diamonds, and found them to be in excellent condition. Even though it was opening Saturday, the trails were relatively uncrowded. All lifts ran quickly and smoothly.

I stayed on the front side, since I was not confident in my equipment or skills in these early runs. I had a great time on all the blue and green runs I tried out.

In the teaching area, lessons for the season were getting under way. Soon there will be abundant lessons and activities for adaptive skiers and wounded warriors. Let’s hope Mrs. Obama and her daughters will visit again this season. Or, they might try sister resort Whitetail, which is only a bit further away. I am certain they will find transportation! Whitetail and many of the other areas in Pennsylvania and Virginia are now open, and are trying to catch up with Maryland and West Virginia. Their time is coming – remember what happened last season!

I made a personal discovery on this trip, which I would like to relate. I learned that skiing can often be easier than walking, especially with the heavy boots on. I had hip problems this summer, and could barely walk. The pain was intense, and I needed the help of a cane. I was afraid I would have to give up the sport which I have loved for nearly 50 years. But, thanks to the invaluable help of nature, my husband Charles, and lots of swimming, I was able to ski. I may take lessons with my friends the adaptive skiers this season. Since I do not know if my problem will recur, I had best learn their techniques. If the amazing adaptive skiers and snowboarders can do it, as well as the brave wounded warriors, I have no reason to wimp out. I have long been an advocate of senior skiing – let’s see if it really works.

Here’s some great images of our visit: Scroll DOWN to see images!

Eric Flynn, general manager, does not decorate that evergreen behind him, and says it is symbolic of the gifts of nature that SkiLiberty has tried to conserve. 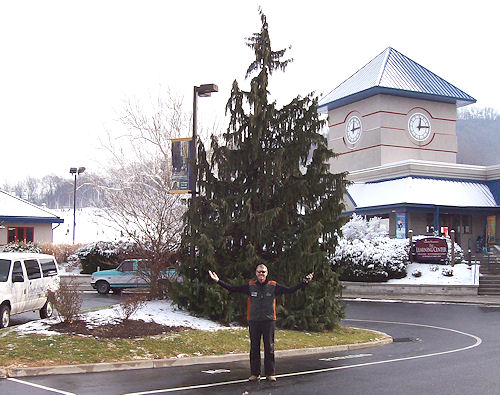 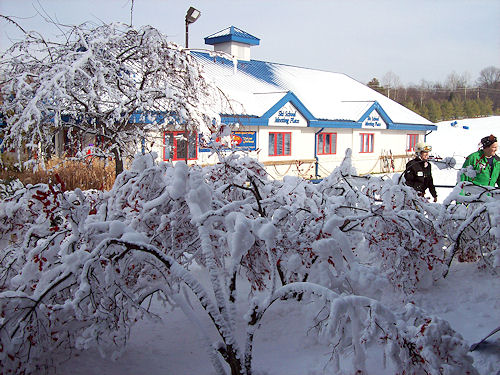 Instructors and candidates tour the mountain 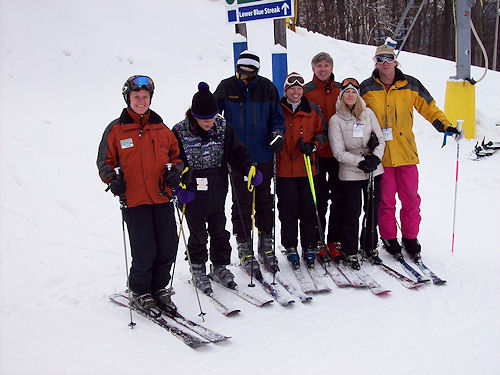 Katrina Holt (on the right) just returned from the Hartford Adaptive in Breckenridge, CO last night and is sharing some teaching tips with her husband Henry and some prospective instructors. 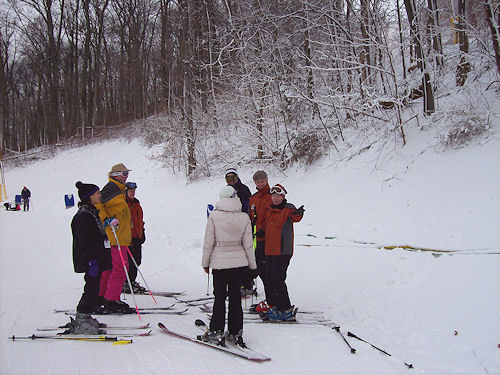