Lesson One: Get Your Attitude Right Before Hitting the Slopes! 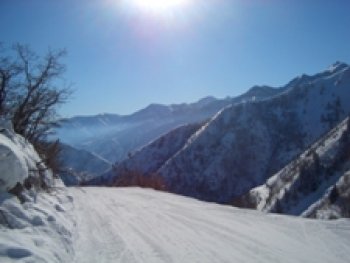 For some people this is the hardest part of the process. If you have no fears of heights, riding the lifts, breaking bones, etc…then proceed right on to LESSON TWO.

If you have any fears of failure, heights, etc…then you should make it a point to go to the bunny hill or beginner terrain at any ski resort and just spend a little while looking around. New skiers of every size, age and color – male and female – are ALL having some form of difficulty. All are falling at least some…and most importantly MOST seem to be having fun! Okay, there will be one or two that don’t have their minds in the right place that are crying or screaming in frustration – but ignore those. That was YOU, before you came here, right?

A Good Attitude and Reasonable Expectations are key to speeding up the learning curve. 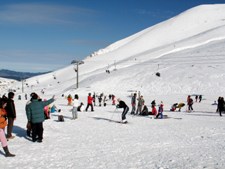 The right attitude is simply one that will allow you to get on the snow and fail miserably and still have a good time. Too many people allow their competitive nature to disrupt the FUN of being on the snow in the first place. My girlfriend (who is my wife now) and I began skiing on the same day. Both of us had done some water skiing but neither had ever clicked into skis and aimed down a hill. I remember that day clearly. I hit the bunny hill, skied it a couple of time and was "ready" to go down something with more of a challenge. My wife wasn’t quite so ready but reluctantly agreed to ride up the chair lift to a small, beginner slope. I’m a pretty good motivator, but two mistakes were made here. The first mistake is that I should not have assumed that SHE was ready to hit a bigger hill just because I was. The second mistake was that SHE should not have allowed me to convince her to take the next step until she felt comfortable being able to ski the bunny hill.

I fell getting off the lift (she didn’t) and then after cleaning up the yard sale I’d made of all of my equipment, I skied right down the slope. At the bottom I turned to see my wife not doing so well. A half-hour later, when she managed to slide on her rear down the 100 yard beginner trail, she gave me a piece or two of her mind and then proceeded to head back to the bunny hill. I chose to be a jerk and headed back to the chair lift and made a few more runs down the hill. I fell a time or two (or three) but all in all I skied. She, on the other hand, spent most of the day chastising herself for not being able to ski and if you asked her today she’d probably say that her first experience on the slopes was not a fond memory. Kind of like ANOTHER bit of interaction between a man and a woman, huh? Guys…even with skiing…be gentle the first time.

I can hear it now – I’m going to get a ton of email from ladies who skied circles around their guys the first time. The truth is LEARN TO SKI AT YOUR OWN PACE. To accomplish that…have your MINDSET and ATTITUDE right – before hitting the snow.

The Right Mindset would be characterized by the following:

1. Don’t set a preset goal that you’re going to be a great skier the FIRST DAY you hit the slopes.

It may or may not happen so approach your first day on the slopes as one that you’re going to JUST HAVE FUN and if you happen to ski 10-20 feet at a time – so be it!

2. If you are going with OTHER first time skiers, leave your competitive nature at home.

Being competitive is great and sometimes it WILL aid you in continuing to TRY after falling time and time again. But know going in that you may or may not do as well as the next person. Translation: You’re probably NOT going to be the next Bode Miller or Lindsey Kildow.

My friend Carolyn was so afraid of heights that she was close to miserable her first days on the slopes. To conquer her fears she usually had a glass or two of wine before she hit the snow. I don’t advocate getting snockered, because we have too many idiots on the snow…totally out of control. But ditch the fears. I’ve spent an hour researching accidents that involved falling out of chairlifts and while it CAN happen, it rarely – RARELY does. So just know that you’re probably NOT going to fall out of a chair lift when you have a death grip on the bar and your co-rider!

Other fears like not being able to stop yourself are legitimate. The best way to conquer that fear is to NOT proceed to any terrain that is steeper UNTIL you are confident in starting, stopping AND TURNING on the bunny hill! You will have NO FEARS at the top…if you are confident in turning and stopping down below.

My six year old daughter can ski ANY terrain except sheer drops simply because she knows how to turn at a 90° angle against the hill. Get a grasp on the techniques to start, stop and turn and you’ll not have any fears of any terrain.

3. Skiing the first day is RARELY perfect…Allow yourself to HAVE FUN!

Remember that you’re ON SNOW. Snow is fun! Being in the mountains is FUN! Being with friends is FUN! Make your goal the first day on the slopes to simply HAVE FUN and you probably will.