It’s the Coldest Day of the Season 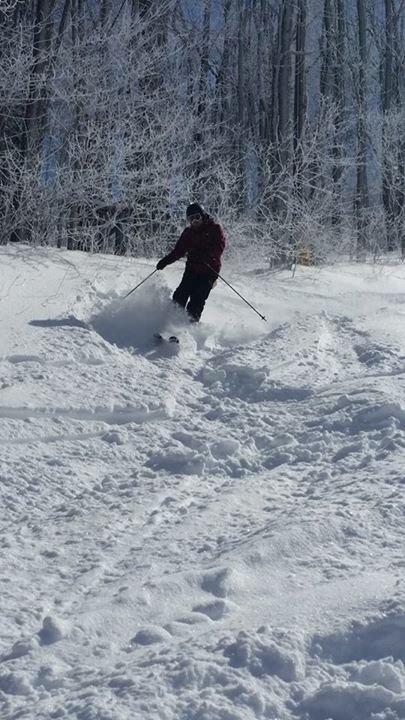 Wow, is it cold.  I can’t remember the last time I’ve seen this many negative temperature readings at the ski areas.  Out of the 16 resorts, 12 are sub zero right now with many in the double digit negatives.  Of the remaining four, two are at zero degrees right now and the other two are at 2 and 4 degrees.  Sheesh.  The coldest reading goes to Beech Mountain this morning.  It’s currently -17 degrees with a wind chill of -45.

There’s some fresh snow and I’ll get to that in a minute, but I’m not sure you could pay me to go snowboarding today.  There would have to be at least a foot of untouched powder for me to want to go out and ride in this cold and even then I’m not sure how long I’d last out there.  If you are one of the brave souls who are venturing out today, make sure to layer up and not have any exposed skin.  Frostbite can occur within 10 minutes in these conditions.  Seriously.  Below is a chart that shows the correlation between wind chill and the onset of frostbite.  I’ve drawn a rectangle to show approximately where we’ll be at today. 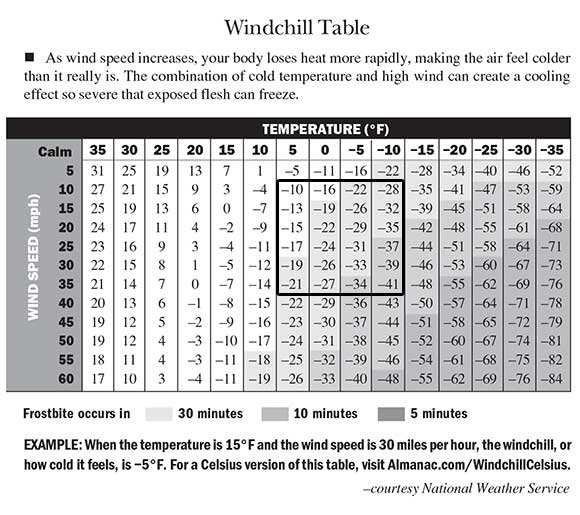 It’s so cold that Ober Gatlinburg has decided to keep the slopes closed today.  There will be no tubing or skiing up there until noon tomorrow.

We will not open our slopes today due to wind chill and cold temperatures.  Slopes will reopen on Friday at Noon.  Tubing, Aerial Tramway, ice skating, eateries & shops will be open from 10-5pm.

That’s probably a good call as I can’t imagine too many people are going to be out on the slopes today.

Fortunately, with that Arctic air there is some snow to talk about as well this morning.  The snow arrived mid-morning yesterday and it was dumping at times throughout the afternoon.  It was funny to see traffic on Resort Cams spike as soon as it hit.  I even had a little snow down here in Charlotte.

In general, several inches fell in the mountains of North Carolina and West Virginia.  Here are the numbers…

A couple of things about those numbers.  One, Winterplace is the big winner for the second time this week.  Six more inches yesterday puts them at 21 inches over the last 72 hours.  That is awesome!  I finally got a picture from up there this week.  Tyler Boeing posted the photo you see to the right on our Facebook page.  It’s from Tuesday after the 14″ storm.  Looks good!  You can click it to enlarge.

The second point about the snowfall numbers is that you might have noticed that Sugar is reporting 7″ on their site but we put them at 3″.  Mike must have jinxed them this weekend when he complemented them on accurate snow reporting, because that’s the second time this week they have blatantly overdone their snowfall totals.  Not only that, but they have bumped up their base depth by 7″ as well.  Winterplace has seen 21″ of snow this week yet their AVERAGE base depth hasn’t changed.  I feel like a broken record whenever I complain about this stuff, but somebody has to do it.

Not to harp on Sugar too much, here is a little Instagram clip I made from Monday up there.  It was good!

Monday afternoon was so good @skisugar.

We’ve Got it Pretty Good Around Here

Five our six weeks ago I mentioned how things were possibly about to get better here than parts of out west.  I was referencing snow conditions obviously and not terrain.  It’s kind of hard to disagree with that notion now though.  Colorado has seen some recent storms and is about to get some more, but the Pacific Northwest, California, and a few resorts in Utah are all hurting pretty bad right now. Mike sent me this email yesterday.

A series of winter storms that dumped more than 1½ feet of snow at Mount Bachelor, OR, in recent days didn’t deliver for Oregon’s low-elevation ski resorts. The magic number for snow this season has been around 6,000 feet.

All those above it – Bachelor, Mount Hood Meadows, Timberline, Anthony Lakes and Mount Ashland are currently open. For the ski areas below 6,000 feet, however, this season has been a nightmare. Hoodoo Ski Area was open briefly in January, but had to close after 11 days and currently has just two inches. The story is similar at Mount Hood Skibowl, Willamette Pass Resort and a host of others.

Last week, the Hoodoo and Willamette Pass ski area websites reported less than 3½ inches of new snow. Both resorts remain closed. Snowpack was 14% of normal across most of western Oregon as of Feb. 5, and that should only get worse as more warm rain enters the Cascade Range. Mount Bachelor, on the other hand, was reporting a seven-day snowfall of 19 inches at the West Village Base and 24 inches at mid mountain.

In California, recent snow has made for better conditions at a number of areas. Nevertheless, the World Cup skicross and snowboardcross races scheduled for Squaw Valley in early March have been cancelled due to low snow conditions. A similar story has played out in Colorado, as anyone who watched the recent World Championships probably noted. The Park City area of Utah has also been abnormally warm, and most of its XC areas are now closed.

North of the border, it’s more of the same. Whistler, BC, has seen only isolated snowstorms over the last two months and the mercury has consistently pushed into spring temperatures.

It’s been a terrible couple months out there.  Some of the pictures I’ve seen are such a bummer.  I never thought I’d see a resort in Utah post something on social media where they were excited about making snow in mid-February.  I read some daily weather blogs from out there and they are pretty bummed in every article lately.  Utah still has a good bit of snow though.  The same can’t be said for the Pacific Northwest.  Check out this photo from Snoqualmie in Washington last week.

That is just amazing to see in mid-February.  I know it was kind of random to talk about this, but I find it very interesting to see a place out west look like that and here we have Snowshoe reporting over 5 feet of natural snow in the past 4 weeks.  Mother Nature is crazy.

Everyone stay warm today!  The coming days should see some warmer temps and there’s even some  more snow in the forecast for the weekend.  I’ll get into that tomorrow though.