It’s Monday, January 31st; No arctic blasts are in sight for the region; Could the GroundHogs Predict and Early Spring?

We have it from a p-r-e-t-t-y good source that the "take is on". Punxsutawney Phil’s handlers can be bought. The price was a little higher than expected this year as we’ve had a VERY COLD and VERY SNOWY winter and there are millions of people in the United States that are ready for Spring. There was a lot of competition for the "buy in" but we pulled it off and I’m going on record as the first reporting service to go ahead and reveal that even if the skies are clouded over with heavy cloud cover and even if you can’t see your hand in front of your face at Gobbler’s Knob due to heavy fog – Punxsutawney Phil WILL SEE HIS SHADOW and predict six more weeks of winter.

Editor’s Note: No Groundhogs or Groundhog handlers were harmed in the writing of this story. Last year after posting that we had the furry rodent taken out and replaced with a fake who was on the take – we were visited by the RSS (Rodent Secret Service) who turned us in to the PETA peeps. (No, not r-e-a-l-l-y. It’s really hard to write fiction on a fact based website!)

IF YOU BASED WEDNESDAY’S PREDICTION ON THIS PAST WEEKEND….

We’re often bringing up how volatile our weather is in the mountains, however here’s one that I experienced first-hand on Sunday returning to the High Country from West Virginia.

The temps were in the mid 30s atop Snowshoe’s 4848′ elevations upon leaving out at around 10am. Just down the mountain in Slatyfork it was 40°. No big deal.

Exiting the tunnel from West Virginia into Virginia things "milded up" pretty quick to 55°. Nothing crazy there.

As I left I-81 and drove into Damascus, Virginia – home to the Virginia Creeper Trail and some of the best biking trails found anywhere it was 63°. At one of the little intersections there I saw one young lady in a short sleeved shirt and thought to myself that I should have been on a court knocking a tennis ball around. There was very little snow left to be found.

Just FIVE MINUTES down the road towards Mountain City, no elevation change, and only two small switchbacks from where it was 63° the temperature dropped to 53°. LESS than two minutes and another curve or two and the temperature displayed 43! The only difference was that we were driving alongside the river and there was a bunch of snow on each side of the road. I glanced at my watch and marked the time so that I wouldn’t exaggerate this story. Only four minutes passed before we were back to 55° and only a few minutes later I was driving through Mountain City watching kids and adults in shorts and short sleeved shirts playing in the park at – you guessed it – 63°!

I’m not certain if I’ve seen a 20° drop and rise in that little of a time span before. Now THAT was some quick changing temps!

By the way, driving back into the High Country from the Tennessee side saw a constant drop in temps until it was back to 45° as we pulled into my driveway.

One glance at some of the climatogy reports from around the region showed that several ski communities hit the 50s and 60s on Sunday! Regardless it has been a very cold and very snowy month.

I was looking at David Lesher’s Canaan Valley Weather Center details this morning and here’s a fact that jumped off the pages. Through this morning there have been only THREE days in January where the high temp was 40° or higher. Here’s some more cold facts based on the Davis, WV weather data:

All of that and they also have seen 72.5" of natural snow during the month.

I was listening to John Hoffman of Fred’s Mercantile this morning on the radio talking about how people should take "a last opportunity to come and enjoy these great conditions". John is a GREAT promoter of all things Beech Mountain but that is not the message we are sharing here because with or without Punxsutawney Phil’s cooperation on Wednesday morning, or whether or not he’s THE REAL Punxsutawney Phil…we still have so much snow on the slopes of our ski areas in the region that we’ll be skiing and riding well into March, if not the end of March or the first of April. One glance at my calendar tells me that’s six to eight to perhaps nine or ten weeks of riding the snow left in the season.

We’re NO WHERE NEAR "taking the last opportunity" to get on the snow!

In fact, if you look at a calendar you’ll see that we’re basically only at the mid-point of the season. This season really got started the first of December. That was eight weeks ago. Since we STILL HAVE a probable eight weeks left – I’d say that we’re at the mid point. 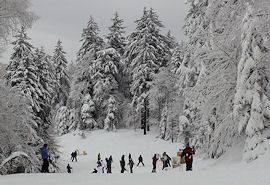 <I’d say we had some awesome snow and ambience this past Saturday at Snowshoe as shown in this photo midday.

As I mentioned on Sunday morning, I skied in the best conditions I’ve skied all winter long on Saturday…minus a couple of powder skiing days at Sugar, Beech and App this season. I’ve read trip reports over on the messageboard where people were claiming the very same thing skiing at Beech on Sunday. Several posted or emailed me that they enjoyed the best skiing they’ve witnessed all season long on Sunday at Beech, Sugar, Wisp and Winterplace. I’d bet the same could have been reported about every single ski area in the region as there’s plenty of snow out there.

We haven’t been hearing from Meteorologist Brad Panovich as much lately. That’s usually an indicator that things are either not all that cold or that there’s no really cold air or snow in sight. One glance at the NWS data and that is the case.

However while February may not start out like January has been…don’t be fooled into thinking that Spring is on the way. During a typical winter, FEBRUARY is usually our snowiest month. March certainly is a snowy month and some of our deepest snows each winter have happened in March. So don’t get the winter blues about this week’s weather forecast. As Joe Stevens mentioned in his column, we’ve only seen perhaps three or four "mini thaws" where we’d go a couple of days of mild air all season long. This week’s forecast doesn’t exactly look "mild" with some frozen, mixed precip and lows in the teens into Wednesday night, Thursday night and beyond.

In closing, look for the Groundhog to find his shadow and predict six more weeks of winter. I also understand that he’s predicting some great "Signing Day Announcements" coming for my favorite football team, so we should be able to get through a couple of rainy, yuck days and get on with a continuing wonderful winter.

Previous Post
MIXED BAG of WEATHER THIS WEEK – App Ski Mtn to host BIG AIR!!
Next Post
WEATHER IS A MIXED BAG THIS WEEK – TONS OF FUN EVENTS COMING UP!