WEATHER IS A MIXED BAG THIS WEEK – TONS OF FUN EVENTS COMING UP!

Monday, Monday, Monday. Another day, another start to the work week. All I have to say is that this week is looking to be a MIXED UP bag of weather. So far I’ve seen the following weather words in the forecast for the week ahead: rain (underdeveloped snow), freezing underdeveloped snow, blustery, cloudy, sunny, snow showers. If that doesn’t say enough to confuse you, I don’t know what will. This past weekend was b-e-a-u-tiful. It was sunny and warm and wonderful. It was a little springtime teaser. Don’t get me wrong I LOVE SNOW, but it was nice to see the sun for more than an afternoon, and it was even nicer not wearing a coat. I was quite comfortable in a t-shirt and my capilene pullover! I hope all of you enjoyed the weekend as well!

So, as I mentioned the weather is going to be all over the place this week, and in just two days we’ll find out how much winter we have left. Mike said this morning that the ground hog WILL see it’s shadow, as he has already paid off the little guy’s handlers. February 2nd is the big day, and I know you’ll all be on pins and needles just waiting to hear what happens. In other MIKE news…he and the family were at Snowshoe this weekend and said it was just about PERFECT! Happy Late Birthday to Mike’s daughter Carrigan who celebrated another year this past Friday.

ONE THING I will point out is that of all the ski areas in the southeast and mid-atlantic that we cover on SkiNC and on SkiSoutheast only 1 area has any new snow to report. WISP in Maryland is MAKING snow, and that’s it. Mild-ish weather has invaded and NO ski area has any new natural snow.

REMINDER that we’re getting things running regarding the SkiSoutheast/Snowshoe Summit. For more information and details an the shenanigans for the weekend click here. March 4th, 5th, and 6th is shaping up to be a great weekend and tons fun stuff is taking shape!!

Let’s start with WISP and work our way SOUTH. As I mentioned, WISP Resort is the ONLY SKI AREA of all the ones we cover MAKING SNOW! They are open today on 100% of the mountain for DAY skiing and riding ONLY. Also open are the Mountain Coaster, ice skating, and tubing!! Monday is $29 deal day – ALL DAY from 9am-5pm $29 gets you an extended day lift ticket, a sport ski or snowboard rental, and a 60-minute clinic!

Canaan Valley – 100% OPEN today! AND it’s Food Bank Monday – Bring a non-perishable food item and receive a lift ticket for $15! That’s a great deal in exchange for helping out an even better cause. TERRAIN PARK features are OPEN! Ice skating, tubing, cross country skiing and snowshoeing are all also open!!

Snowshoe Mountain – Open on 59 of 60 slopes and trails. I don’t mean to brag on her, but Laura Parquette knows what she’s talking about when it comes to what’s going on at Snowshoe (that’s her j-o-b, duh!) so I’m going to yield the floor to her…"What a spectacular weekend! We don’t mean to dwell on the past, but it’s hard not to after two beautiful days filled with sunshine and phenomenal on-snow conditions. Mother Nature has really been kind to us lately, and that’s why we’ll give her a pass on the weather that we’ll be experiencing the next few days. Between today and Wednesday night, we should see a mix of pretty much any type of precipitation you can imagine. From rain to snow, sleet, freezing rain and everything else in-between, we won’t be surprised if we see it the next few days. Temperatures will also be a little out of sorts, fluctuating between the low 40s and nearly single digits! That means we’ll see some dramatic changes out on the slopes as well. We did see some heavy skier traffic this weekend and some warmer daytime temperatures, which, couple with an overnight freeze, may mean we start off with an icy patch or two, especially on steeps like Lower Shay’s Revenge. But as the day goes on and the surface gets worked over that ice should disappear. With the possibility of some rain over the next few days we may also see some periods of heavy, wet snow. That rain, along with the milder temps we’ll be seeing, will mean we’ll cut back on grooming over the next few days to preserve our snow surface. But don’t worry; with anywhere from 4-10 FEET of base spread across our 244 acres, the snow will still be there! And with snow and very cold temperatures returning Wednesday night, we should have everything back in tip-top shape before next weekend."

Snowshoe is also hosting the first stop on the Red Bull Super Hit Tour and the Homegrown Music Festival this weekend, so if you’re headed up that way, you’re in for a pretty exciting weekend!

Timberline – Open on 38 or 39 slopes and trails on GROOMED surfaces. Conditions remain awesome as temperatures are holding in the 30’s for today. There are tons of fun events going down across the southeast and mid-Atlantic this weekend, and Timberline is no different…they are hosting the SCION SNOW TOUR this Saturday…here’s what their website says, " Shred alongside Signal Snowboards pros Matt Guess and Kyle Earl. Free giveaways including Scion beanies, Purl Wax wax samples, and Woodward swag. DJ spinning live and special appearance by the all new Scion tC. Road Trip Raffle giveaways include new Signal Snowboard, Scion travel bag, and Signal outerwear combo!"

Winterplace – 100% open today on groomed and packed powder surfaces. TWO terrain parks are open for all you freeskiing and riding enthusiasts! Tubing is also open!

Massanutten – 100% OPEN today for DAY and NIGHT skiing and riding. MASS has TWO terrain parks open with some pretty sweet options: in the CMB Terrain Park – two flat boxes, C-box, pole jam, three tables, a roller and a barrel. In the Easy Street Terrain Park you’ll find a couple of tables, rollers, and a flat box!

Appalachian Ski Mountain – Open today on 100% of the mountain. BIG even this weekend – The Shred for the Cup BIG AIR goes off on Saturday, February 5th. This event is the first event in ATP’s 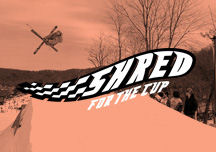 Shred for the Cup Series. A variety of jumps and takeoffs will be constructed by ATP’s one of a kind crew. SPY Optics will be on hand giving out swag. Registration is from 4-6pm in the Snowcloud Room on the 3rd level of the lodge. Even if you’re not competing, this is an awesome event for spectators as well!! ICE SKATING is open, too!

SHRED FOR THE CUP is the premier event series in the region and this year marks its 5th season. This competition series is open to skiers and riders of all ages and abilities. Tons of prizes are up for grabs as are points for series winners.

Beech Mountain – Open today on 100% of the Mountain! Beech is gearing up to host an pretty cool event this weekend…Sunday marks the second installment of the Edge of the World BoarderCross Series – The series is open to skiers and boarders of all ages and is $15 to register. The race kicks off at 1:00pm.

Sugar Mountain – Open on 100% of the mountain! Ice skating and tubing are open, too!

Wolf Ridge Resort – Open today on 15 of 23 trails with 2 lifts. The UPPER LODGE is closed today and will re-open on Friday at 4:30pm. TUBING is also open today!!

Ober Gatlinburg – 100% open today and hosting the Special Olympics Tennessee Winter Games! The games kick off this morning with 140 athletes competing in alpine skiing, snowboarding, and speed skating!! This is a great event to support and check out even if you aren’t skiing or snowboarding!!

That’s all for today folks! I am still interested to hear what all of you have to say about helmets. What kind do you wear? Do you like it? Pros and cons? You can contact me directly at [email protected]. Also take a few minutes to check out our sister websites www.highcountryweather.com and www.highcountrywebcams.com!

Previous Post
It’s Monday, January 31st; No arctic blasts are in sight for the region; Could the GroundHogs Predict and Early Spring?
Next Post
At this Point in the Season Terrain Parks are in Prime Condition!