I LOVE ME SOME AUTUMN TEMPS!!! 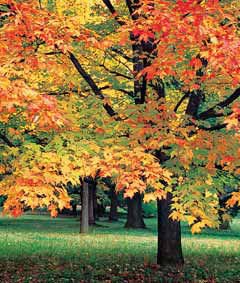 WE ALSO COVER THE OLD FARMER'S ALMANAC IN THIS POST!

THIS is the time of year when the higher elevations of the mountains really set themselves apart from the flatlands. Sure it's colder once winter hits and that's when you guys travel up here in droves. However to me it is this time of year that really gets my juices flowing.

I didn't even have to get out of bed to know that it was going to be another "Foggy August" morning. I had left the windows in my bedroom cracked a few inches and even under a light blanket – it was c-h-i-l-l-y. I quickly took a glance at the temps around the region and saw a low of 49° at 3:53am this morning at the top of Sugar Mountain. It was 48° this morning at 5am at Fred's General Mercantile atop the 5500' elevations of Beech Mountain and it was 50° here at our offices between Boone and Banner Elk.

Even though the temps are supposed to creep on up to the mid 70s by midday, this morning it FELT like Autumn is on the way and for good reason – it IS! That said, I couldn't help but take a look at the weather down off the mountain where a lot of you guys are reading this post/blog and in "Famously Hot", Columbia, South Carolina this morning THE LOW is 64° and today's high will reach to 90° or higher! Yeesh!

This time of the year really gets my heart pumping because the murmurs of Autumn also means that it is time for college football and my beloved Gamecocks are taking on Texas-we-no-longer-have-Johnny-Football-A&M on Thursday afternoon where the temps at gametime should be a sweltering 96°. In true John McEnroe style I feel like saying, "Are you freakin' kidding me?"

So even though it's chilly this morning in our little piece of heaven – Fall is still about 4-6 weeks away. We're still in for some warm-to-hot days around here as well as we move through September, but these last few mornings have really been nice and they definately signal what's right around the corner weatherwise.

THREE MORE FOGS SINCE WE LAST CONNECTED…
When last I checked in with Tom Payne at The Mast General Store he was reporting only (6) foggy mornings. I'll try to get an update from him, but since his numbers have been a bit low for our taste – we've kept our own. Blake Heller, one of our marketing staffers, lives over in the Linville area and he's reporting (15) at last count.

[updated 08/27/14] >>>
We have added three foggy mornings (INCLUDING THIS MORNING) to get our tally up to (17) of the (27) days of August thus far. That's still a bit low, but we'll take it compared to what old Tom is reporting. One of our staff lives over in Blowing Rock and he's stated that seemingly every morning has been foggy over there this month.

THE OLD FARMER'S ALMANAC – WHAT ARE THEY SAYING?

I cannot TELL you how many emails I've already received either asking about OR informing me about what TOFA is saying pertaining to predicting the Winter season for our Southeast and mid-Atlantic ski resorts. Diehard snow lovers have been all over that forecast since it was released whereas most of you seem to wait for me/us to share that with you. 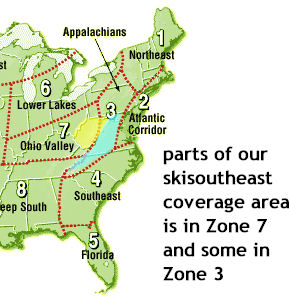 When evaluating what The Old Farmer's Almanac says about our region you have to be able to read between the lines a little bit as portions of our coverage area – specifically the West Virginia ski areas – are in Zone 7 whereas Wisp Resort and the Virginia and North Carolina resorts are in Zone 3. Then TECHNICALLY Ober Gatlinburg is in Zone 8 – but you have to ignore that as their elevations and weather patterns more closely emulate those of Cataloochee and Wolf Ridge.

That said, HERE is the synopsis:

Winter will be much colder than normal, with the coldest periods in mid-December, from late December through early January, and in mid- and late January. Precipitation will be slightly below normal, but snowfall will be above normal, with the snowiest periods in early to mid-November, mid- and late December, late January, early February, and early to mid-March.

…For the REST of us in the region

The forecast for the VA, NC and TN mountains looks VERY similar with only a slight "adjustment" in wording.

So THERE you have it. If you want to go and do some self-forecasting via The Old Farmer's Almanac check their website out at www.Almanac.com.

WE'RE STILL 'READING' THE ACORNS AND CRITTERS SO STAY TUNED!

For now I can tell you that all of the creatures that hibernate in the winter are all scurrying about like crazy in my neighborshood. Around dusk you really have to pay close attention to the road as the squirrels, chipmunks and groundhogs are in ABUNDANCE. I've already seen more deer than normal crossing my drives into the upper part of Sleepy Hollow and if I were a betting man – I'd bet you that we could hop in my car and drive over to my house right this second and I'll give you $100 if we don't see three rabbits on the side of the drive to my house…if you'll give me $1 if we don't. They're everywhere. I'd make money on that deal.

Acorns? Let's just say I would not walk barefoot in my yard right now! We'll try to disect some more weather folklore a bit later. Then there's ALWAYS that woolly worm.

Until next time…Go Gamecocks (Thursday night)…