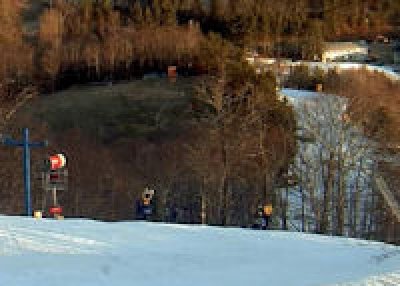 Spring officially started on Wednesday, March 20th. That was now nine days ago. There's a missing persons report out for Spring as "she's" evidently no match for Old Man Winter and "his" unwillingness to take a chill pill and make an exit stage left. (Someone wrote me about a Scandinavian legend of how Spring is a feminine character in folklore…so I'm going with that.)

Evidently in this Scandinavian bit of folklore Spring had to be rescued as Old Man Winter just wouldn't go quietly into the night. We may have to recruit a posse to go confront Old Man Winter to see where he might have Spring tied up.

Snow continues to blanket the ground at the highest elevations with perhaps 5-6" still on the ground around Beech Mountain and Sugar Mountain. Looks like perhaps a bit less than that is still on the ground over at Cataloochee.  However up around Timberline Resort in Davis, West Virginia or over at Snowshoe Mountain in Snowshoe, WV there is still around TWO FEET OF SNOW still blanketing the ground.

If you haven't been to Snowshoe Mountain, let me describe what you would see on your way up Snowshoe Drive from the bottom of the mountain – headed to the top Village area. As you make the drive up, you'll come to the point where the top of Cupp Run is. Right there I'll bet that there's about 8-10 feet piles of snow where they've piled the snow from now over FIVE FEET of snow that has fallen within the month of March!

Davis, West Virginia, which is home to both Timberline and Canaan Valley Resorts has seen 68.9" of natural snow in March and they still have 22" of snow covering the ground.

…and it's March 29th, Good Friday, two days from Easter and the last day of the month!

I can recall a few seasons within the last seventeen years when conditions on the slopes might have been this good…or close to it…but I can't recall even ONE season where we saw "packed powder" conditions at numerous resorts on the last days of March.

I can't recall a season wherein I have kayaked, caught a few rays in the sun, snowmobiled and stepped into a snowdrift armpit deep all within a two week span. That all took place in the last two weeks as I was over at Watauga Lake 10 days ago and we were sipping on cold beers and laying out in the sun for an hour or so; just after kayaking a bit. A few days later we were experiencing 13" or so of snow here in the Banner Elk, Sugar and Beech Mountain areas. As mentioned before, Davis, WV has seen 19.3" officially since March 25th!

I was up playing in about a foot of snow on Wednesday afternoon and dropped down into a powder bowl where I was literally armpit deep in snow. We had some fun blasting through walls of snow 3-5' deep with four-wheelers. Then on Thursday (yesterday) I had to open the windows in my office as temps warmed into the mid 40s.

All within a few days. I've said it hundreds of times (and heard it said thousands) that if you don't like the weather in the mountains, just wait 30 minutes and it will change. That is no more true than within the last week or so.

All that said – snowlovers and of course those resorts that are catering to them like Snowshoe, Timberline, Winterplace, Wisp, Wintergreen, The Homestead, Bryce, Cataloochee and Sugar Mountain are loving the conditions that are anything BUT late season, typical Spring conditions.  Kenny Griffin and Adam Goudelock from our office were skiing and riding up at Sugar on Tuesday and Wednesday of this week and they reported that the conditions on the wind-loaded slopes along the edges there were three feet deep and more. Kenny was out west back in early February or so and he said that the powder at Sugar this week was the same face covering, airways choking snow as he powdered his way down Whoop dee Doo.

Be sure to check the snow report pages and you'll see that some of the ski areas are just "bragging" now. Sugar is 100% open today with all 20 trails. So is Bryce and Timberline Resorts. Snowshoe is operating on 52 of 60 trails which is simply astonishing this time of year. Several resorts were planning to close LAST SUNDAY and then postponed closing until this past Wednesday and then this coming Sunday.

Now Snowshoe, Wintergreen and The Homestead are skiing on into April. Go figure!

I remember that earlier this season all of the weather gurus were talking about this being a "back-loaded" winter. They changed that forecast mid season and shouldn't have because it has certainly been one, hell of a back-loaded season with more snow at the end that in any season that I can remember except during the Blizzard of '93 year.

SNOW is in the forecast tonight and again Monday night here in the High Country. Highs in the 30s and low 40s with lows in the 20s and low 30s all the way through next Thursday. Next Wednesday night, April 2nd, Snowshoe's low temp is meant to be around 19°. That doesn't sound like Spring to me!

With all of this snow on the ground and these kinds of temps, we're going to have to send out a search party like that Scandanavian group did eons ago and see if we can rescue Spring. I think "she" needs our help!