The End is Approaching Quickly… 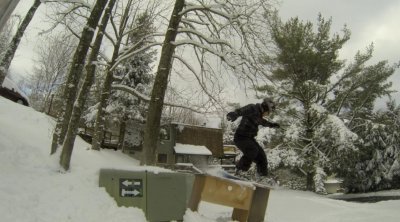 Hey, hey, hey it's Friday! Well, not technically but it basically is for us folks here at Appnet. We have tomorrow off so it's the end of the work week for us. I'm also pretty stoked/a little saddened because this is the last day I'll be working up here in Boone. I'll be back down in Charlotte (Davidson technically) on Monday. It's crazy to think that the season is just about over! Five months has gone by rather quickly.

I've been trying to take advantage of all the snow this week. Yesterday I talked about my two pow nights at Sugar. Yesterday afternoon I decided to go take a hike around my place. It sounds kind of weird, but I just liked hiking around the woods in all the snow. Then, I got the idea to build a little jib. Actually, I wouldn't call it a jib. It's too small to be a jib and you couldn't really do anything on it, not that I have the ability to anyways. It was pretty janky, but it was fun to hit it a few times.  You can click on it to see a bigger version. I'm just trying to enjoy the snow for as long as possible. It seems that several ski area managers have the same idea as the past couple of days have seen announcements from The Homestead, Cataloochee, and Snowshoe Mountain in regards to staying open just a little bit longer. I mentioned yesterday about how The Homestead will be open through Wednesday, April 3rd. Cataloochee announced on their Facebook page yesterday that they will now be open this Saturday. They were originally going to close on Friday. In all honesty, that really didn't make sense to do so it's good to see them open for at least one weekend day when more people can get out there.

Then, Snowshoe came out and announced that they are pushing back their closing date all the way to next Sunday, April 7th. They posted a video yesterday along with the announcement.

There are two things I noticed in that video. One, Ed Schneider (the guy in yellow) has a pretty gnarly beard. I'm jealous. Two, conditions look absolutely ridiculous up there for the end of March. That video looks like it was shot in January, not on March 27th. You can easily see why they pushed back their closing date to next weekend.

Get out there and get it while you can. The weekend should be fun as there's a ton of snow at the resorts still. It's rather remarkable. After Sunday, unless you can make it to Snowshoe or The Homestead (or Wintergreen next weekend, maybe), you're out of luck in terms of having lift accessed terrain. Well, you could always go to Liberty Snowflex. They're open year round. My friends and I already have a trip in the works for sometime in April. But yeah, the season is basically over after this weekend except for those mentioned resorts. Sad face. It's been a good one though. I might post a review of my season next week. It's been my best ever.

That's it for today. Everyone have a Happy Easter weekend!