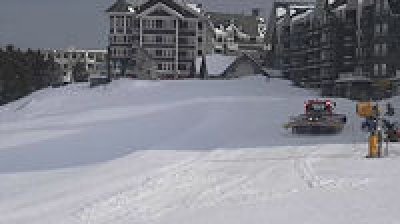 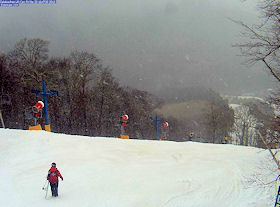 I took Good Friday off and was chilling after catching up on some email when my wife's cell phone rang. It was a friend informing her that it was SNOWING in Banner Elk. Yep, SNOWING! If this was Monday, I'd have KNOWN that it was an April Fool's joke. It wasn't. Tammy Brown of Cataloochee Ski Area over in Maggie Valley posted a sweet photo of conditions on the mountain on Saturday. The photo was a screen capture from their LIFT CAM and the timestamp on the photo shows that at 4:47pm it was SNOWING like crazy!

We've always said that the ski areas RARELY close for a lack of snow, but rather a lack of people interested in skiing or riding the snow. From what I've witnessed over the last few days, you guys have received the message loud and clear that the resorts have tons of snow, great quality snow and lots of life left in the 2012-2013 ski and snowboarding season.

I don't remember the last time I've seen so many people on the slopes up at Sugar for a Friday before the end of season. Ditto that on the Winterplace and Snowshoe cameras!

Winterplace's Travis Roberts informed me on Friday afternoon that Winterplace Resort will now stay open until April 3rd or longer depending on the weather.

Snowshoe has already, previously stated that they are planning to remain open through April 30th.

(JUST KIDDING! Okay they said, April 7th…but it's close enough to April Fools Day that I thought I'd throw a tease out there!)

Cataloochee Ski Area has ALREADY set a record for the longest ski and snowboarding season in their long history. The message is getting to you guys who want to ride "one more time".

It's a testament to our ability these days to broadcast an accurate message "out there" via Twitter, Facebook, the LIVE STREAMS via www.ResortCams.com and of course our network of SkiSoutheast.com, SkiNC.com, HighCountryWeather.com, SnowshoeWeather.com, WinterplaceWeather.com and on and on and on! All of the resorts now have a pretty strong social media audience and the the message of just how great the conditions are right now is inspiring good visitor participation…at least enough to inspire the resorts to prolong their seasons.

ALL GOOD THINGS MUST COME TO AN END…

Okay, unless some kind of "The Day After Tommorrow" (THE MOVIE) scenario takes place wherein we have an eternal winter hit us on Easter Sunday, here's what we expect to happen AFTER closing sessions tomorrow.

Bryce and Cataloochee resorts will close after Saturday's day sessions (TODAY). Sugar will go one more day and close Sunday at 4:30pm.

Timberline Resort will play day and night on Saturday and then call it a season on Easter Sunday after day sessions.

Wisp Resort is nearly 100% open today and tonight and they USUALLY go into April, but the new owners are playing a little more conservatively and Wisp will close Easter Sunday for the snow season. Bear in mind that Wisp is a 4 season resort that actually entertains larger crowds during the summer than they do during the winter season. Deep Creek Lake is a must visit if you haven't been!

So that leaves ONLY these resorts to visit if you still want to make some turns after today or Sunday's sessions.

The Homestead Resort in Virginia is still operating through April 3rd and not only are they running 8 of 10 slopes – they are still running Snowmobile Tours.
Wintergreen Resort is 100% open with skiing and tubing open for today and Sunday. They will close during the week and reopen for next weekend. Wintergreen Resort plans to make April 6th their closing day.

Snowshoe is riding each day from now through April 7th and they are boasting the region's most open terrain with 52 of 60 trails. They are still doing night sessions over on Silver Creek. This MAY be the latest we've seen Silver Creek running in a season.

Winterplace HAD planned on closing after TODAY, but they have now decided to ride on through April 3rd and MAYBE longer – weather permitting.

So the opportunities are diminishing…so go play!

CATALOOCHEE: 14 of 17 Trails Open for DAY SESSIONS ONLY TODAY. Cataloochee will close after today's sessions. This marks Cataloochee’s 149th day of skiing and riding for a record breaking number of days skied for the area. Their 148th day included SNOW falling from the sky and amazing conditions.

SUGAR MOUNTAIN: 20 Trails (100% open)
They are now clearly announcing that tomorrow, Easter Sunday, will be their last day of this season as they will close down at 4:30pm tomorrow. Tubing and Ice Skating are already closed.

BRYCE: 8 Trails (100% open)
They will close today after day sessions.

THE HOMESTEAD: 8 of 10 Trails open today for day sessions. Tubing open as well. This is The Homestead's first season working with us and it has been a record breaker for these guys. They have extended their ski and snowboarding season through April 3rd. They are still offering Snow Mobiling tours as well!

WINTERGREEN: 25 of 25 slopes open with tubing open as well for today and Sunday. Wintergreen will then close Mon-Friday and they plan to reopen, weather permitting for next weekend. They posted, "When you combine SNOWPOWER with great March weather, you end up with tons of snow and a lot more opportunities to slide!  Conditions are unbelievable with 100% of the ski area open and plenty of base. Ski and Ride:  We are open today, skiing and riding from 9a-5p.  Head to Wintergreen for: lots of sunshine, great terrain park features, 25 trails and tons of snow!"

SNOWSHOE: 52 of 60 trails open. They are open for night sessions tonight and tubing, snowmobiling and all the on and off snow fun a person can have! Snowshoe posted, "We're extending the season! The Snowshoe Basin area will now be open through Sunday, April 7th. We've surpassed our average annual snowfall and are not ready to say goodbye just yet. Come join us and soak up the last moments of the longest season in a decade."

TIMBERLINE: 40 of 40 (100% open) for day and night sessions Saturday. Timberline's LIVE CAM has been showing some really nice crowds. Timberline will close for the season Easter Sunday.

WINTERPLACE: 100% open with all 27 trails. They are offering day and night sessions today and excellent conditions. Tubing is open as well. They've now decided to play on through April 3rd and maybe longer weather permitting.

WISP: 31 of 32 trails open for day and night skiing tonight. Tubing and ice skating are open. Sunday will be their last day of the season.

SPEAKING OF TRAFFIC…IT'S TIME TO BRAG A BIT

www.ResortCams.com was brand new this season as that new website debuted on September 24th, 2012. Barely a month later, Superstorm Sandy dumped so much snow across the upper portion of our coverage area that the new website drew 65,000 unique visitors in less than 60+/- hours of that storm. The LIVE STREAMS caught on quickly thanks to meteorologists from all across the mid Atlantic from Altoona, Pennsylvania, to Baltimore, to Roanoke, to Charlotte, to THE WEATHER CHANNEL, to WRAL, WSOC, WBT, WCNC and many more.

ResortCams.com obviously got a great 14-year "head start" from HighCountryWebCams.com and GrandStrandCams.com but the new streams really kicked things up a notch. I cannot begin to tell you how many hundreds of calls and tens of thousands of emails that we've received from people telling us that the LIVE FEEDS were amazing and that the camera resolutions generated from our new video servers were unmatched nationwide.

The new success from ResortCams.com has been the driving force to us setting a new single-season visitation record THIS SEASON of 7,286,612 unique visitors who have come to our network of ski, weather and webcam websites since the close of last season through March 29th at 6pm. (There's no doubt been more since 😉

Of course ResortCams.com has only tracked visitors since late September and the HighCountryWebCams.com numbers were lost when we migrated that site to the new servers.

With Snowshoe going through April 7th and several others playing for a few more days, we'll obviously see those records continue to mount.

We still have much planned for the weather content that we deliver but those sites ALSO saw record numbers this season with HighCountryWeather.com actually out-trafficking SkiNC.com during the period of October 29th-March 29th. That is ALSO a first!

The network of SkiSoutheast.com, SkiNC.com, all of our weather content and ResortCams.com is far and away the most watched, viewed, or visited ski and snowboarding web presence covering the five state area.

That's ENOUGH (don't you think?) for today. Email me if ya like at [email protected]