Great Start to the Week with Some Light Snow

Today’s featured image is the beautiful winter scene at Canaan Valley this morning.

The week is off to a great start.

A fresh coating of snow fell overnight at a few resorts to help offset the post-holiday fog. 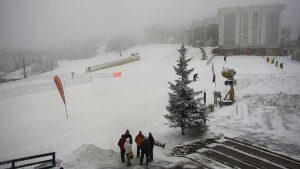 Snowshoe is fogged in this morning.

There were no significant snow totals but Beech Mountain, Sugar Mountain, Canaan Valley, Snowshoe, and Timberline all saw around an inch of fresh powder. Winterplace is reporting a half-inch this morning.

While we would love to see more, we will definitely take it.

Speaking of more, our own Brad Panovich shared his latest skier’s forecast overnight.

The pattern is looking sweet.

Meadowbrook Inn is a tranquil mountain retreat located in the heart of the Blue Ridge Mountains in scenic Blowing Rock, North Carolina. Situated one block from the upscale shops, restaurants, and galleries on Blowing Rock's Main Street, they offers a relaxing mountain escape in the midst of some of the High Country's most popular attractions. 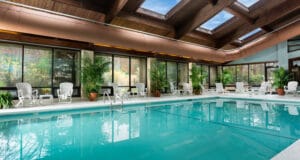 As he mentioned, we have a really nice outlook for the next couple of weeks including a chance of natural snow on Tuesday and again later in the week.

As a cherry on top, the mountain op crews will get to their thing as there will be plenty of snowmaking opportunities after today.

For complete condition details, be sure to visit the Snow Reports page.

Here is a quick snapshot of how things stand on this Monday morning. (An * means snowmaking took

North Carolina
App Ski Mountain – App is playing on 10 trails with five lifts in operation today. They are reporting a groomed surface atop a 35-65″ base.

Beech Mountain* – Beech is reporting a 38-54″ base with groomed conditions today. They have 15 slopes and five lifts available. 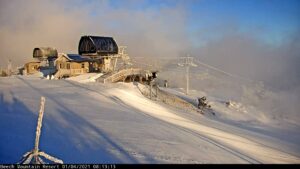 Beech Mountain is offering some incredible views this morning.

Cataloochee* – Cataloochee is playing on a groomed surface with a 30-50″ base. They are skiing on 14 trails with five lifts spinning today.

Sugar Mountain* – Sugar is playing on 14 trails with five lifts in operation. They are playing on a manmade surface and frozen granular surface with a 30-71″ base.

Wolf Ridge – Wolf is offering four trails and three lifts for play today with a 24-42″ base and a groomed surface.

West Virginia
Canaan Valley* – Canaan is riding on 11 trails serviced by two lifts. They are reporting a 15-30″ base with a frozen granular surface.

Snowshoe Mountain* – Snowshoe is playing on 186 acres today with 45 trails and 11 lifts in operation. They are featuring a groomed surface with a 55″ base.

Timberline Mountain* – Timberline is playing on a groomed surface atop a 16-60″ base. The resort is featuring 15 trails with three lifts turning.

Winterplace – With a groomed and granular surface, Winterplace is riding on a 28-48″ base. They have 23 trails open for play with five lifts spinning.

Virginia
Bryce Resort – Bryce has seven trails and three lifts as we kick off the week. They are reporting a 30″ base with groomed conditions.

Massanutten Resort – The ‘Nut is skiing and sliding on seven trails with five lifts in operation. They are reporting a 30″ base with groomed conditions.

Wintergreen Resort – Wintergreen is playing on 12 trails with three lifts in operation. They have a groomed surface atop a 22+” base.

Tennessee
Ober Gatlinburg – Ober is reporting a 20-35″ base with a groomed surface. They have six trails and three lifts open for today. Tubing is sold out until Jan. 7.

Maryland
Wisp Resort – Wisp is playing on 15 trails with seven lifts spinning today. They have a 15″ base with a frozen granular and groomed surface.

That does it for today, but until tomorrow, #ThinkSnow!