Fresh Snow For Your Friday

Today’s featured image is from our own Kenny Griffin from Beech Mountain.

Snow is currently falling across the southern resorts making for incredible conditions as we slide into the weekend.

The North Carolina resorts are the big winner this morning as the snow has been heavy at times. App Ski Mountain has reported six inches of fresh snow, while Cataloochee has received four inches since the snow began. 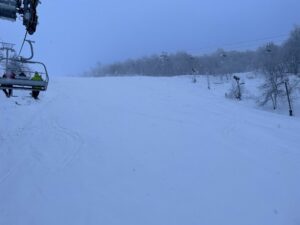 Another shot from Kenny at Beech Mountain.

Ski Sapphire – which reopens at noon today – has received three inches of natural snow along.

Kenny is at Beech Mountain this morning and provided an awesome Facebook Live to show off the conditions.

Resorts out of North Carolina haven’t received any significant snow this morning but could see some natural goodness later today.

Ober Gatlinburg is reporting an inch of natural snow. In West Virginia, Canaan, Timberline, and Winterplace all received a trace of snow.

All of that said, things are looking spectacular for those able to hit the slopes today.

For the full details, be sure to visit the Snow Reports page, but here is a quick snapshot as we head into the weekend.

North Carolina
App Ski Mountain – With six inches of natural snow, App is playing on 12 slopes with five lifts in operation. They are reporting a 38-70″ base with a groomed surface. As a reminder, they do require online reservations.

Beech Mountain – Beech is playing on 15 trails serviced by four lifts today. With a groomed surface that will probably become packed powder later today, they are playing on a 38-58″ base.

Cataloochee – The Maggie Valley resort is playing on a packed powder surface with a 39-59″ base. They have 14 trails and four lifts in operation. They are requiring four-wheel drive or AWD for their access road today.

Ski Sapphire – Ski Sapphire is reset to join the fold at noon today. After receiving three inches of snow, they are reporting a 31″ base with groomed conditions. They will have both trails in service.

Sugar Mountain – Sugar is playing on 17 trails with five lifts spinning today. They have a 37-78″ base with a natural powder and frozen granular surface.

Wolf Ridge – Wolf is riding on four slopes with three lifts in operation today. With a groomed surface, they are reporting a 26-46″ base.

West Virginia
Canaan Valley – With their seventh day of recording at least a trace of natural snow in 2021, Canaan is reporting a solid 15-30″ base with a frozen granular surface.

Snowshoe – 4848′ continues to look incredible as we head into the weekend as they are playing on 49 trails with 13 lifts in operation for a total of 198 acres. They have a 55″ base with groomed conditions.

Timberline – Along with Canaan, Timberline has recorded at least a trace of snow every day except one in 2021, and is playing on 15 trails with three lifts turning today. They are reporting a 16-60″ base with groomed conditions.

Winterplace – Winterplace is riding and sliding on 23 trails with five lifts turning. They are reporting a groomed and granular surface with a 28-48″ base.

Virginia
Bryce Resort – Bryce is offering seven trails and three lifts for play today. They are offering a 30″ base with a groomed surface.

Massanutten – The ‘Nut is playing on a 30″ base with a groomed surface. They have seven trails for riding with five lifts spinning.

Omni Homestead – Homestead has a 24″ base with groomed conditions. They are open to mid-station with two slopes in play.

Wintergreen Resort – Wintergreen is offering 12 slopes for play today with three lifts turning. They have a 32+” resort with a groomed surface.

Tennessee
Ober Gatlinburg – Ober will be reporting on six trails with three lifts spinning when they open at noon today. They have a 20-35″ base with groomed conditions.

Maryland
Wisp Resort – Wisp is riding on a 15″ base with groomed conditions this morning. They have 17 slopes and eight lifts in operation.

With more snow falling throughout the day, conditions will be fantastic this weekend. As a reminder, be sure to plan out your trip ahead.