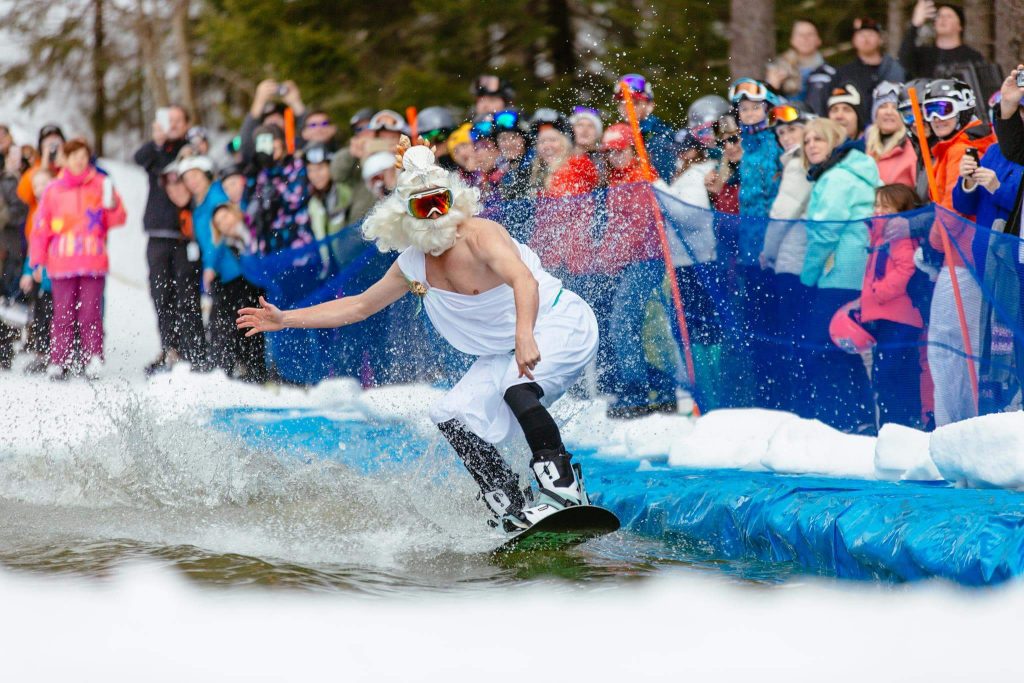 A fun March weekend has given way to another Monday, and the realization that the season is winding down is hitting me this morning as we had several ski areas close yesterday.  The snow report is taking less and less time to do!  We’ll add another resort to the list of closed ski areas today as well as we begin spring.

Last week’s cold and snow looks to have made for some fun times this weekend.  I’m looking on social media at the resort pages and I’m seeing a bunch of smiles in the pictures they posted.  The pictures also show some nice March snow conditions.  I am still super bummed that I didn’t get the opportunity to ride this weekend, but sometimes the snow isn’t priority numero uno.  I’m already looking forward to the weekend and park laps at App on Saturday or Sunday.  Maybe I’ll finally man up this year and do the pond skim.

A few ski areas threw in the towel this weekend on the 2016/2017 ski and snowboard season.  Timberline Resort in West Virginia and Massanutten Resort in Virginia are both done for the year.  Both had stellar conditions for their final weekend as Massanutten saw several inches of snow last week, with Timberline receiving almost a foot and a half in the past week.  Here’s some of that snow on Friday.

With all of that snow it stinks that they had to close down as the webcam still shows a ton of snow out there.  As is the case most of the time though, it’s not a lack of snow that causes ski area closures here in the region, it’s the lack of skier traffic.

Two other ski areas closed up for the time being, and possibly for good depending on the weather.  Wintergreen and Winterplace both are closed Monday-Friday this week, with the potential of re-opening on Saturday if the weather this week doesn’t hurt things too much.  The forecast shows a variety of things this week including rain and a brief influx of cold, so we’ll just have to wait and see what happens with those two.  I don’t even want to speculate but I could totally see both opening for Saturday only, as Sunday looks wet.

That leaves us with seven open ski areas today.  Appalachian Ski Mountain, Beech Mountain Resort, Cataloochee, Sugar Mountain, Snowshoe Mountain, Bryce Resort, and Wisp Resort are your only options for skiing or snowboarding in the Southeast right now.  Unfortunately, that number will be six come tomorrow morning as Sugar Mountain announced yesterday that today would be their final day of the season.  I was pretty surprised to see that when it happened.  Mike wasn’t, but I was.  Things are starting to look a little thin and narrow out there, but Sugar stayed open on a couple different occasions this year when perhaps they shouldn’t have.  I figured they would try to eek it out until the weekend but alas, the burning of the snow will be today and at 4pm they will be done for the year. 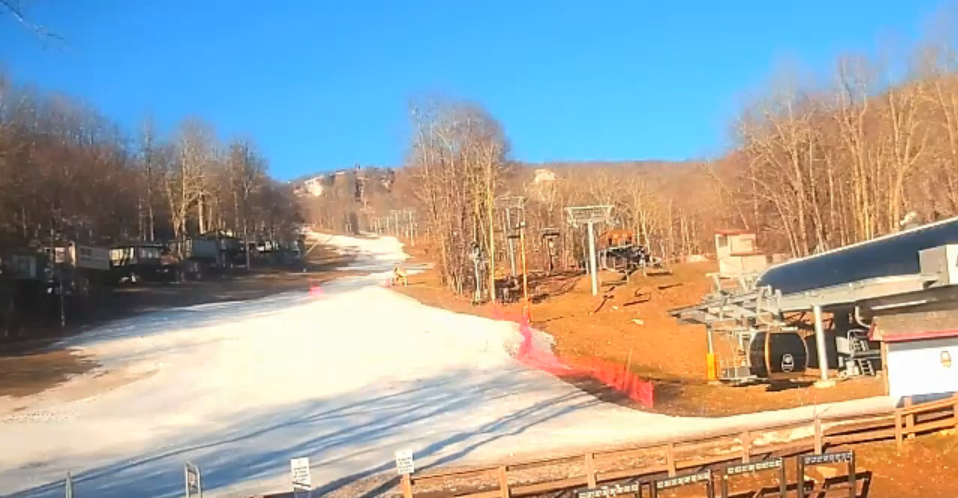 Sugar this morning. Looks like nice weather for their final day!

As for the other six open ski areas, they are all looking pretty dang good this morning.  Some look better than others, particularly the further north you go.  Snowshoe looks amazing this morning for it being late March now and it remains the best choice to get some turns in.  They’re still open on 36 slopes, practically the whole main basin.  To be honest, it looks better out there right now than it did at times in January and February! 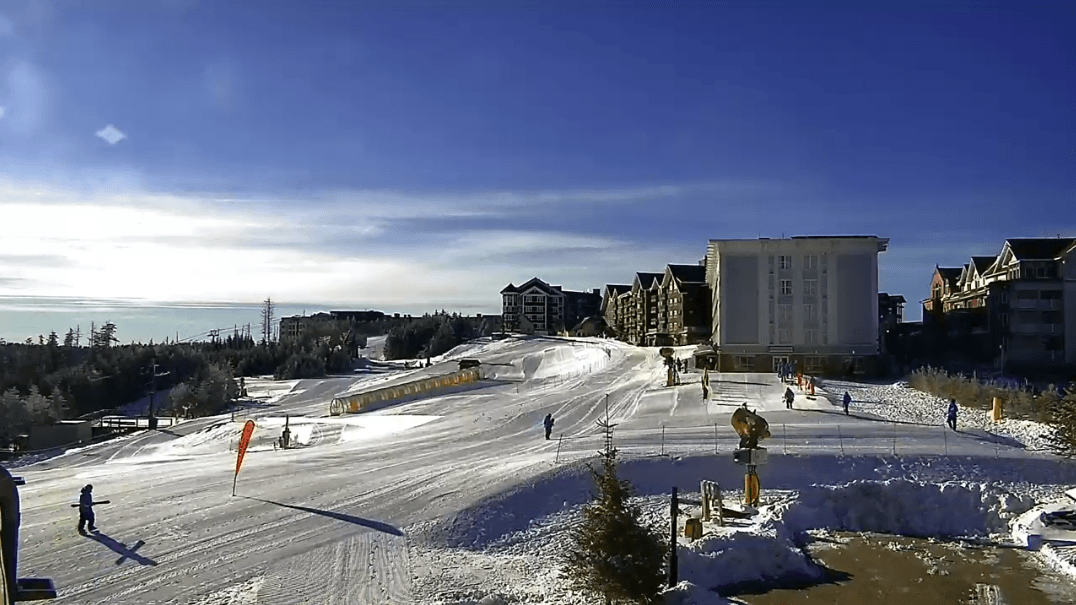 The Shaver’s Centre cam at Snowshoe looks awesome this morning!

Wisp Resort in Maryland is also looking rather dapper this morning after working hard all last week to open up for their “Life’s a Beach” weekend.  They got things in such good shape that they have decided to remain open as long as the weather and conditions allow.

Bryce Resort in Virginia continues to operate daily.  Their “39-51 inch” base that they claim on their snow report might be a bit of an exaggeration, but nonetheless things are looking good out there right now.

Down here in North Carolina, things don’t look quite as good, but App, Cat, and Beech are in good enough shape to get some quality skiing and snowboarding in.  App is probably your best choice right now in NC as they have the best coverage, but you can’t go wrong with either of those three.

If you do decide to get some turns in this week, you’ll have to play hooky from work or wait until the weekend.  Nobody is open for night skiing.  Just wanted to give a heads up on that.

What will Mother Nature give us for the final week of the season?  Well, it looks like a variety of things.  As you’ve already seen from the two webcam shots I’ve posted, it’s nice and sunny out this morning.  That and milder temps are the theme of the day.  However, clouds and rain move in late today/evening.  Showers tonight and tomorrow will be less than ideal.  Colder temps do return for Wednesday and Thursday though.   Thursday night looks more borderline, but Wednesday night will definitely be cold enough for snowmaking.  That said, the only two resorts I think would even consider making snow are Snowshoe and Appalachian Ski Mountain.  That’s not a guarantee though but rather me just mentioning a possibility.  I’ve been to App on the final Saturday of a season where they made snow the night before, so it’s not out of the question.

After that, things mild back up for the weekend.  Saturday will offer textbook spring skiing conditions with sunshine and very mild temps.  Can you say spring corn?  Showers return by Sunday for the final day of the season.  I suppose it’s only appropriate with the year we’ve had.

There’s only seven days left in the season now, so make plans to get at least one more day of skiing or snowboarding in this week.  I promise you’ll regret it if you don’t.

Previous Post
IT’S NOT OVER, UNTIL WE SAY IT’S OVER – by Joe Stevens
Next Post
A Quick Tuesday Update