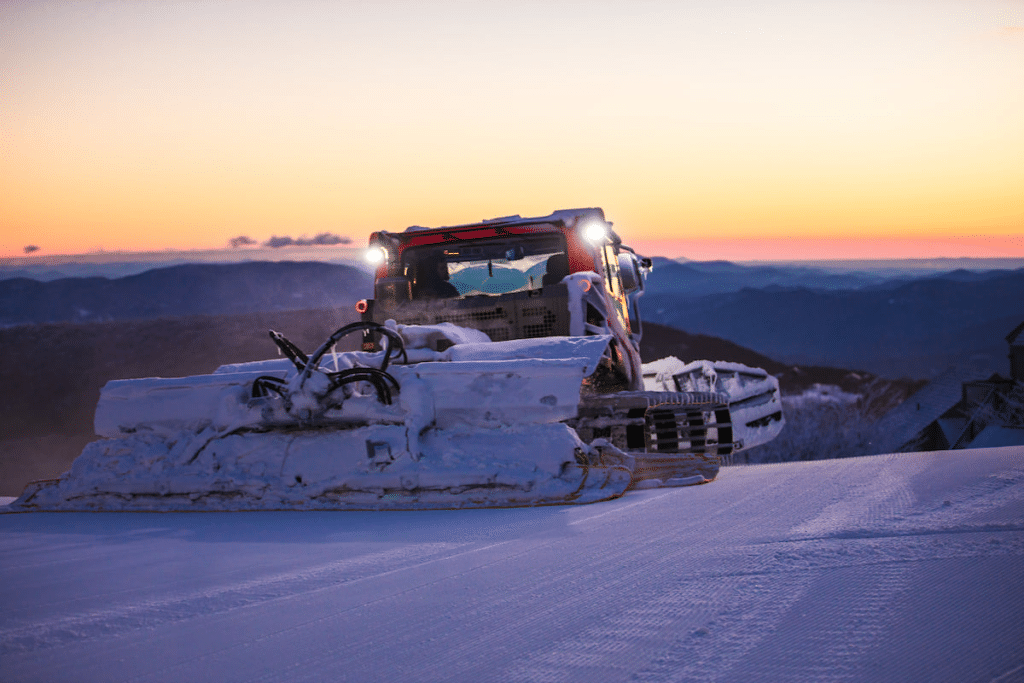 Sunday’s are my day to ramble…so grab your coffee and hang on.

The Photo of the Day comes from Beech Mountain Resort. Beautiful sunrise and grooming shot!

A LOT of our resorts are SOLD OUT for skiing, snowboarding, snow tubing and even some for ice skating and even tiddlywinks. So if you are a glutton for punishment and simply HAVE to ski or ride today, check out the SNOW REPORT and as best we could, we have provided that information there. (Bear in mind that a status can change by mid-morning.)

On Saturday, I shared two LIVE FACEBOOK streams and it seems you guys like those. Our Facebook traffic has been off the charts this season compared to most and Saturday’s traffic was up 1861%! We even picked up 202 new followers.

Of course we ALL like looking at snowy ski resorts and mountain tops. MORE SNOW FELL on Saturday as another 4″-5″ fell at Wolf Ridge and Beech & Sugar mountains. 7″ to 8″ of natural snow fell at Snowshoe Mountain, Canaan Valley and Timberline – with 5″ falling at Winterplace.

As we have seen all winter really, the Virginia resorts were able to MAKE SNOW and conditions are AWESOME there, but they missed out on anything more than a TRACE of natural snowfall. 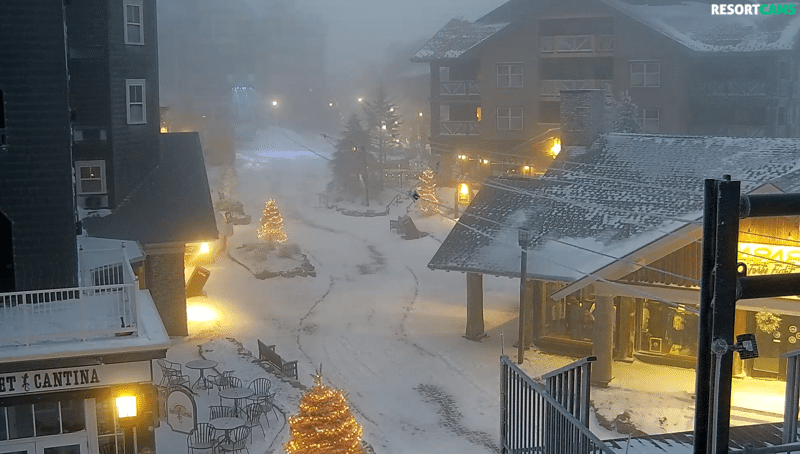 Snowy Snowshoe Mountain Village from this morning. Click to Enlarge

Here is a share of Saturday’s second Facebook feed. (If you guys are Facebook peeps, be sure to have your notifications TURNED ON for SkiSoutheast and you can participate LIVE with us. It was great seeing SkiPink and Mikey Valach and others chime in.)

By the way, SNOW continues to fall across many of our ski resorts this morning and the best way to see that and avoid the crowds is via: Ski Resort Webcams

We have a lull in the action today other than some flurries here and there. Another bit of upper level energy passes through tonight and Monday. Snow showers return tonight and continue at times into Monday afternoon then taper to flurries, similar to what we had Saturday. However, accumulations are less for the higher, western elevations.

Back to the TITLE of today’s FirsTrax…

We talk about perception on this website all the time. The PERCEPTION would be, “yea” it HAS been very snowy…and it has. However, most of those snowfalls have been the 1-2″ variety and not a huge dump of snow unless you count the 6-7″ we had in some spots yesterday in West Virginia and last week here in the North Carolina mountains.

I had a reader question me about natural snowfall in the NC mountains since January 4th and we have had 19″ of snowfall in the last 13 days so that IS p-r-e-t-t-y snowy for sure. In fact, that is about a FOOT more than has fallen in usually snow-prone West Virginia.

So far within this crazy La Niña season, things have not gone quite as forecasted. Our own meteorologist, Brad Panovich did concur with dozens of weather gurus – before the season began – that things could be cold and stormier across the north, and warmer than average temps further south. That was supposed to bring less than usual snowfall. Of course, he was one of the few who did share that with some unique, arctic blocking we could see colder and snowier conditions than normal.

Seems thus far at the 41% mark on the season, we’ve had a bit of both. It’s been colder than expected so far, allowing resorts to make tons of snow in WV, TN and NC – with slightly more borderline temps in the Virginia mountains. However, even THEY have conditions awesome right now. In terms of natural snowfall, the West Virginia and Maryland mountains ARE DOWN anywhere from a foot to a foot-and-a-half on the season-to-date. The Virginia ski mountains are ALL down around 8″ or so.

However, Ober Gatlinburg in Tennessee and almost all of the North Carolina mountain resorts are OVER normal snowfall-to-date with Beech Mountain Resort 18″ above normal so far with 51″ on the season. Flurries continue to fall today and more snow is expected on Monday to the delight of all of the travelers for the MLK Weekend. 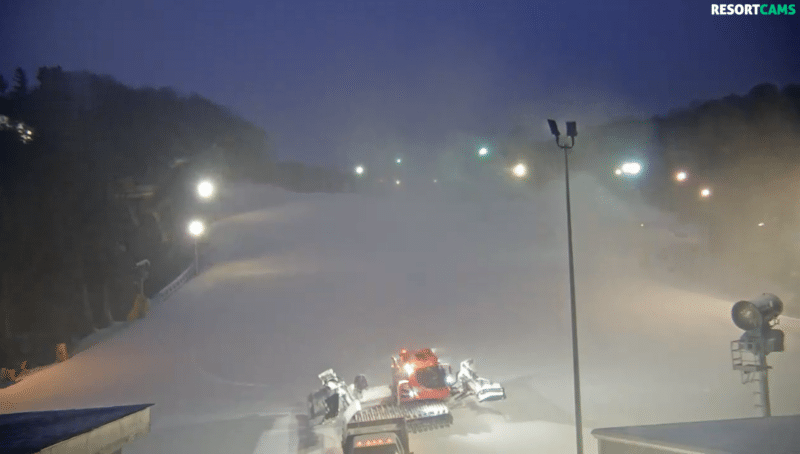 Beautiful morning capture of some “Cat Grooming” going on. Click to Enlarge!

How Much Snow Has Fallen Per Resort

Using Thanksgiving Day 2020 as the start to the current season and March 31st, 2021 as the last day – that would give us a 126 season. (Resorts could opt to stay open through Sunday, April 4th or shut things down a Sunday earlier on March 28th this season.)

Of course, all of that is weather (and covid) dependent. I have a feeling if things continue to be as they are right now and we have good, weather, that resorts would opt to close March 28th or even sooner because mountain ops crews at EVERY resort this season will be TRASHED, EXHAUSTED, WORN-OUT, PHYSICALLY, MENTALLY & EMOTIONALLY DRAINED from the rigors and challenges of this season.

Regardless, for the purpose of the snowfall tally, we will use 126 days as a full season. Today would be the 52nd day since Thanksgiving and therefore at the 41% mark in this season. (Halfway mark would be Thursday, January 28th.)

Paints a clear picture, doesn’t it?

Note that the ONLY resort mountains that are OVER AVERAGE SNOWFALL are in North Carolina and Tennessee. It will be interesting to see if that trend continues!

As I was looking around at various social media pages on Saturday, it is clearly apparent that the 2020-2021 ski & snowboarding season has been a challenging one so far. Every ski season we see various complaints that revolve around really only 2-3 resorts. Of course, for the last few seasons, the big loser in the complaints department was at the OLD Timberline Resort. Thankfully Chip Perfect and their amazing crew have turned most of those frowns upside down!

However, this season I am seeing more complaints flying at really, every ski area. Some are complaining about lines, mask wearing (or not enforcing it strictly enough) and even parking. Many are sharing their complaints in the form of suggestions about selling less tickets as the slopes are way more crowded than usual this season.

However, the BIGGEST COMPLAINT? Easily, the majority of complaints revolve around ski areas not “thinking ahead” and hiring enough people to properly manage the crowds. I am not even going to share them here because it would fill a notebook 5″ thick already this season. I’ve read hundreds of them related to managing rentals, lift ticket windows, parking lots, snow tubing, etc., etc., etc.

Another NEW complaint this season is that people can’t use many of the ONLINE LIFT TICKET programs. More than ever this season, I am seeing complaints about reservations or HELP phone numbers not answering.

Yet another new one is people finally getting through a ski rental line only to find that lift tickets are sold out. Another one of my favorites (not really) is from more than a few visitors who purchased their lift passes and rentals online, only to find there was nowhere to park within miles of the resort.

The REALITY of it is…every ski resort that I know of is CURRENTLY BEGGING people to apply for jobs EVEN NOW as we are approaching the half-way mark on the season. Most every resort has JOB OPENINGS posted on their Social Media feeds. They ALL used Zip Recruiter, Indeed, local papers and most hosted JOB FAIRS and they have just NOT had people come forward looking for work.

I LOVED one complaint that I read yesterday when a woman was screaming (CAP LETTERS) about how a particular ski area should have managed hiring better because she had all sorts of issues in her visit on Friday. She went on and on about how “failed” their management was by not properly preparing for this ultra-busy season. The response came from a mountain manager who simply shared, “We’ll expect your application”…and he provided a link to their online APP form!

The truth is…even though in September I predicted that this could be a record skier-visit season, nobody could have come close to guessing HOW BUSY. Ski resorts began advertising for HELP as they always do – in the Fall -and people just didn’t come forward looking for work.

Resorts often depended very heavily in hiring J1 workers from around the world to fill their positions but due to covid, there’s been a BAN on J1 and other US work visas and those scenarios have created real issues in staffing at EVERY resort.

If you are reading this and don’t have a job – and want one…simply show up at ANY ski resort of your choice and tell them that you want to work and they will HUG you and put you to some task.

That’s it for me today. Enjoy your Sunday and get out and PLAY in the snow, even if you can’t buy a lift ticket! Email me as you like at [email protected]

Previous Post
HALFWAY THERE
Next Post
Do Not Adjust Your Computer or Phone Screens; It’s Still Snowing!

Beautiful and Bright Day On Tap