Conditions are GREAT at all Southeast Ski Resorts

word of the day: slush. so warm that all the ice had melted into slush. in some places, it was nice and deep and you could imagine, real hard, that it was powder. we skiied w/o jackets or gloves.

the whole mountain is open and only a couple of grass spots poked through.

other word of the day: crowds. fortunately we could just click in and ski off, but I feel bad for those poor folks waiting in the rental lines. at 11 am, i checked into the ski center and the line was still over an hour i would estimate. i think it was take your church-group-that-has-never-seen-snow to the mountain day. if they think this is what skiing is all about then the sport is safe from the evils of over expansion.

thats our 2nd trip of the year and wg does a great job with crowd management; the lift lines moved well except when the primary lift – blue ridge express – broke down for like 20 minutes, leaving my 10 yr old girl stranded at the bottom and me at the top. she was major dissapointed that she missed riding on the snowmobile by about 1 minute when it restarted. the wait on highlands was never more than a minute or two, for me at least. the wait on acorn was ususally 5-10 minutes. Tyro and acorn had the best snow by far, and acorn was nearly always empty, while cliffhanger looked like some sort of bizarre mass coreography event.

Skied last night at Beech. Hero snow, good carving snow everywhere. Visibility on the top of the mountain was limited, to say the least.

We sat up top for a while and watched about 80% of the people get off the quad and turn left down Shawneehaw, which looked like Wal-Mart the Friday before Christmas. Very few people on Robbins, Southern Star or White Lightning. Then about 8:00, the hail hit for a few minutes, then the rain. Hung out at the bottom for a while, then went back up around 9:00. Rain at the bottom and big, quarter sized snowflakes at the top. Clouds cleared out right at 10:00, and headed off to the bottom.

Bill Read was at Wintergreen:

I was wonderfully surprised at how nice the conditions were today.  Lots of good manmade snow and groomed conditions that made for a GREAT day of skiing. Upper and Lower Dobie were great to ride and Upper Cliffhanger, Lower Wild Turkey and Lower Cliffhanger were a little shaved icy in spots, but all in all it was great everywhere!

Mike Doble was at Snowshoe Mountain Tuesday and Wednesday:

Tuesday was one EPIC day to be on the slopes and even though the crowds were out in force…the lift lines never got to be longer than 10-15 minutes.  We did FIRST TRACKS at 8:50am and skied right onto the lifts for the first 1.5 hours! Most often lift lines were 5-10 minutes.  At times the slopes were crowded…but if you timed it right, there were many areas where you were all but alone on a run.  Slope conditions were remarkable ALL day long on most mid-mountain trails.  I never made it over to Shays or Cupp (couldnt believe that!) but I heard from many trips up the lifts…that they were pretty icy…as was Widow Maker. However, most of the 57 trails were absolutely phenomenal.  Tuesday’s skiing was enhanced by the 3" snowfall on Monday and conditions were perfect…and the scenery was awesome with the evergreen covered in snow…both from the recent snow…and the previous 58" that Snowshoe has seen so far this season.

We did first tracks again Wednesday morning, and the surface was a bit crusty – medium frozen groomed.  We skied down to the Boat House and had NO wait to get some of the best Belgium Waffles you can find.  We ate quickly and hit the Ballhooter lift up the mountain and skied for the next hour with no waits at the lifts.  The second and all subsequent runs were perfect as the snow softened quickly…even though the temperatures stayed in the 30s.  I witnessed what HAD to be a record lift line length on the GrabHammer Lift.  The line HAD to be literally 100 yards long waiting for the triple lift.  Amazingly it didn’t take more than 10 minutes to get on…which was nice.

After lunch and about ten great runs down the mountain…my group decided to do something that none of us had ever done.  SNOWBOARD.  Read about that on Thursday morning’s stories!

If you’re at Snowshoe…look me up…we’re all wearing SkiNC Hoodies!

Conditions were great here, but the crowds were pretty heavy.  Some of the lift lines became unbearable at mid-day and I gave up on skiing.  After lunch things died down a little bit (not much) and I made several runs.  The sun was pretty warm enough to shed some outer layers and I saw numerous people skiing in long sleeved tees. All in all a GREAT day to be on the slopes.

We will keep a log of the best reporter’s submission, photos and reports. Trust us it is way to time consuming to post every pic…but send them…because we are tallying the scores.  The winner of the Best On Snow Reporter for 2005-2006 will win $1000 in cash, a FREE Getaway Vacation and more.  The contest will run from now through March 1st and we will choose the winner.  Our choice will be based on the following and IN THE ORDER of importance.

Extra points will be given for getting smiling faces in the photos and including names and cities where you can.

Extra points will be awarded for creative ideas.

We will choose the winner based on how helpful and informative the reports have been.

As of 12/29/2005 here are the top vote getters. (We will only document the top three to five here throughout the season…and we may begin posting the top ten, depending on how close results are.)

Mike Doble
Mike is the Editor and founder of SkiSoutheast.com, SkiNC.com and ResortCams.com. Since September 1996 he has posted close to 14,000 posts, articles, photos and videos promoting all of the ski areas of North Carolina, Tennessee, Virginia, West Virginia and Maryland.Mike is the father of four daughters, is an avid skier and enjoys golf, tennis, kayaking and hiking in the mountains. Winter snowsports and Summer boating on Watauga Lake are among his favorite pastimes. 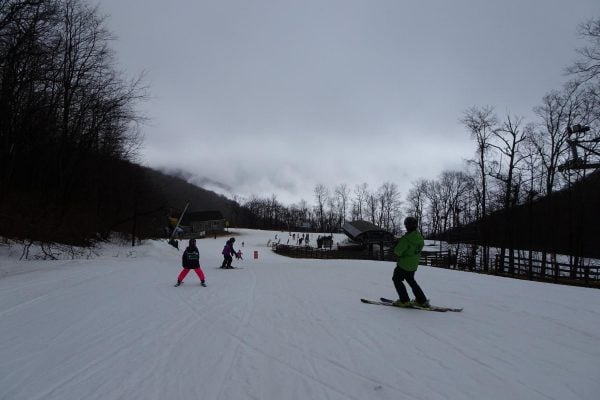 CONGRATS TO KEVIN McNAMARA for Being December’s TOP SKI REPORTER!