Comparing This Season to Others in Recent Memory 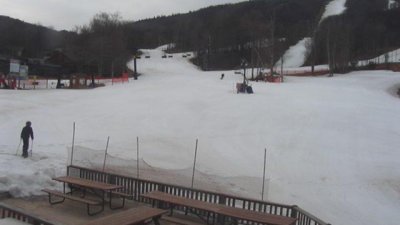 Check the shrinking snow report page for all of the resort slope conditions at a glance. See: https://www.skisoutheast.com/skireports.php.

Another morning, another article where I’m finding it hard to find stuff to talk about. Each day this week it has gotten progressively harder. In all honesty, I haven’t snowboarded since the Snowshoe Summit and I doubt I will again this year. I’ve been in tennis mode this week and Mike and I have hit around up at Seven Devils the past few afternoons. It’s been fun. I’d like to go out to App but I hate riding by myself. I’m coming to the realization that I might be done for the year.

That’s not to say that decent conditions don’t exist still. There’s still a good bit of snow on the slopes at the remaining open ski areas. Usually towards the end of the season we’ll see a couple resorts try to hold on for as long as possible even if conditions are complete crap. That isn’t the case this year. The ones that are still open are looking pretty good, especially considering the weather.

Speaking of weather, I was curious to see just how this winter compared to previous ones in terms of snowfall and temps. Many people have said that this one is the worst in a long time so I was curious to see if that was indeed the case. I am only looking at the past 5 or 6 years because I just thought of doing this so I haven’t researched it that much. I’m also only looking at Beech because it’s my "home" mountain and because I was able to find data pretty easily for it.

Looking at those numbers, you can see that this winter wasn’t that much different than the seasons of 06/07 and 07/08. January and February of this season were definitely warmer, but Beech did see more snow and their snowmaking is way better now than it was then. I feel like those facts kind of even things out.

I didn’t start really getting into snowboarding hardcore until 4 or 5 years ago, so I can’t quite remember how conditions were during those two other seasons. I can’t image that they were exponentially better though based on the weather data. This season has definitely been sub-par to say the least, but I really think that it has seemed so much worse because of the past two winters. The past few seasons, especially 09/10, saw dump after dump as well as the persistance of bittery cold temps. I remember Beech closed two years ago on the last weekend of March with the entire front side of the mountain open. It’s crazy to think that White Lightning didn’t even open this year (the fun part of it anyways).

Like I said, it’s been a sub-par season in terms of the weather. It’s a good thing we have the best snowmaking crews IN THE WORLD here in the region. Alright, that may be a bit of an overstatement, but they are really freaking awesome at what they do.

I’ll be back tomorrow for my final First Trax of the season. Sad face. Talk to you guys then!