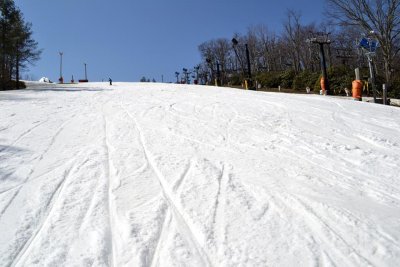 Check the shrinking snow report page for all of the resort slope conditions at a glance. See: https://www.skisoutheast.com/skireports.php.

The time has come. Today is my final First Trax of the season. I might post an article or something next week, but as far as keeping you guys updated on a daily basis, this is it until November!

I have come to the conclusion that I must have some kind of curse. Here is why I think this. I began this job last February. As you remember, the first half of last season was bomber. It was cold and snowy on a consistent basis. Powder days were an every week thing. As soon as I took over, conditions went in the crapper. I think we saw maybe one snow event in the second half of last season and it rained…a lot.

Fast forward to this season and yeah, you know the story. My first full winter doing this and it was a sub-par year to say the least. I don’t know what it is, but Mother Nature doesn’t like me having this job I guess. I’m hoping that this trend doesn’t continue into next season and that we see another winter like the one two years ago. This job is a whole lot more fun when the snow is flying.

Classifying this season as a roller coaster is an understatement. It’s been cycle after cycle of mild and wet to cold and snowy and then back to mild and wet. It was a challenging one for the ski areas. It’s crazy to think that the only resorts in the ENTIRE REGION that were able to get to 100% open at any point this winter were Bryce, App, and Cataloochee. That fact is skewed a little bit though when you realize that some of the West Virginia resorts have more than double the amount of trails that those places have. That said, I guess you could say that those three ski areas get bragging rights for the year.

I know I probably sound like a broken record, but how freaking awesome is snowmaking here in the Southeast? Many times this winter it only took 24 hours for the resorts to completely transform conditions from crummy to really good. Many places actually started from scratch THREE times in late November and early December. Their aggressiveness and committment to laying down a quality product is pretty awesome. If you are disappointed in how this season went, just remember that it could have been worse. Can you imagine what kind of winter it would have been without the modern snowmaking that we have? Yikes.

Enjoy this last week of the ski season here in the region. It’s going to be a LONG summer so get some more turns in if you can. I know as soon as April 1st I’ll probably be feening to ride.

As of right now only App, Cataloochee, and Wisp are planning on being open on a daily basis next week. App and Cat will close next weekend and Wisp is still saying April 8th when I called this morning. That’s not going to happen though. Timberline will be open on the weekends through April 1st, weather permitting (I doubt they’ll make it past next weekend).

Remember to keep checking out High Country Web Cams and High Country Weather thoughout the summer! We’re adding new cams all the time. I actually just got the new Banner Elk Winery cam running this morning. Between that one and the new Sapphire Valley cam, we have some pretty scenic views now. I love it.  Myself and the design guys around here also have some sweet ideas for Ski Southeast and Ski North Carolina, so hopefully in the fall those will come to fruition.  I think you guys will like what we have planned.  If you have any thoughts or ideas on what you’d like to see, feel free to email me!

Enjoy your summer people! I’ll talk to you guys in the fall. Mike will be with you this weekend.  theKENDOG over and out.

Previous Post
Comparing This Season to Others in Recent Memory
Next Post
Coming to Sugar Mountain Resorts Defense – Yes REALLY!