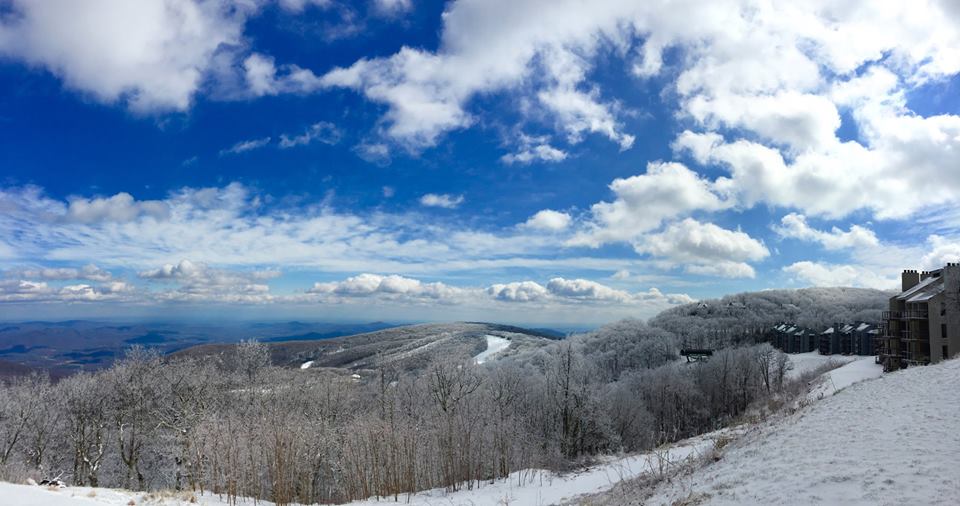 January in March continues as unseasonable cold temperatures remain.  Yesterday was pretty brutal with some impressive wind chills.  We even have some more snow to talk about for the resorts in the northern part of the region.  A few of them have now bypassed the one foot mark in the past 3 days!

It’s not quite as cold this morning as it was yesterday, but it’s still pretty dang chilly out there.  We have a couple of spots (Beech and Snowshoe) in the single digits to start the day while everyone else is in the teens and 20’s.  Yesterday was pretty gnar as the wind was HOWLING.  Only dedicated skiers and snowboarders probably made it out yesterday due to the extreme cold.  Take a look at the weather station atop Beech Mountain.  Over the past 24 hours they haven’t gotten out of the single digits and wind chills have consistently been the NEGATIVE DOUBLE DIGITS.  Yikes. 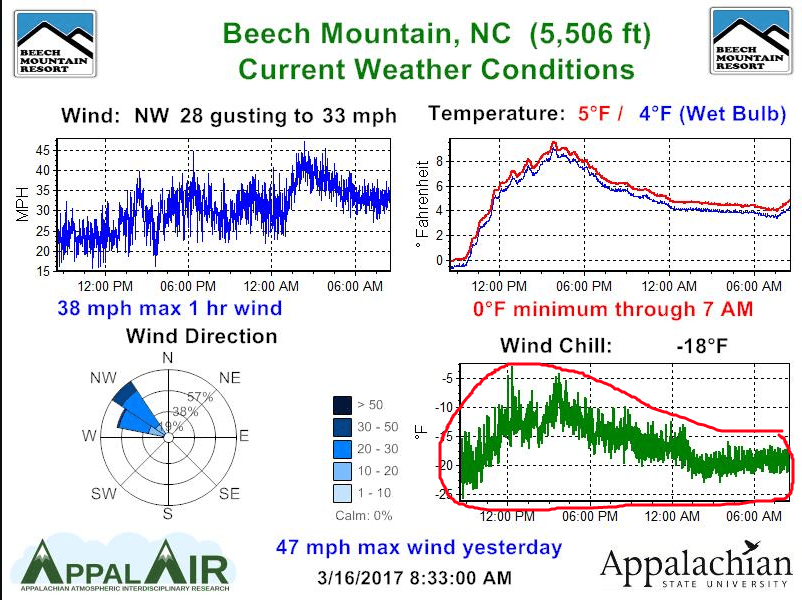 Whoever did make it out though was treated to some excellent late season snow.  It’s not too often in March that you see a decent snowstorm with cold temps persisting afterwards.  Usually it warms up soon thereafter and all of that snow melts pretty quickly.  That’s not the case this week as most of that natural snow should stick around for a while as the forecast remains on the cold side.  It’ll warm up a bit (relatively) over the next few days but in general we’re going to remain below normal for this time of year.

If only this weather pattern had happened in January and February.  Brad Panovich mentioned something last night on a Facebook live that is interesting.  He talked about how this time of year the sun angle is almost double what it was in January AND we have a couple extra hours of daylight now.  Despite those two facts, we’re still seeing one of the coldest stretches of the entire winter.  That goes to show just how impressive this Arctic air blast really has been.

Not only is it cold this morning, but we have some more natural snow to talk about for the ski areas up in West Virginia and Maryland.  As expected, they’ve all seen a little bit of snow, and in Wisp Resort’s case it’s been moderate snow.  Wisp is reporting 6″ of additional snow in the past 24 hours.  That puts them at 8″ in the past 48 hours, and 14″ in the past 72 hours.  That is awesome.  With all of that snow and cold, if they hadn’t decided to re-open this upcoming weekend then they might have had some really angry folks.

Timberline has seen another 2.6″ of snow in the past 24 hours as well.  They are also now over a foot this week with 13.7″ of snow in the past 72 hours.  They have been closed all week so all of that snow will be waiting for guests when T-Line re-opens tomorrow.  It appears as if this will be the final weekend for them as they have now updated the message on their website to say “Re-opening for the Finale Weekend March 17th-March 19th.”

And finally, Snowshoe Mountain is reporting an additional 3″ of snow this morning.  They too hit the foot mark this week as this snow puts them at 13″ of snow in the past 3 days.  Only 4 more inches and they will hit the century mark for the season, joining Canaan and Timberline as the only others to do that.  That sounds cool, but reality is in a normal season that would have happened back in early February probably.  Regardless, the Shoe looks awesome this morning with 35 open trails.  That number will jump back up to 50 plus tomorrow as Silver Creek will be re-opening for the weekend.  That is awesome to hear as SC is a great place to go to avoid the crowds on the weekend and it offers night skiing and riding.  It’ll be open from 12-9pm both days.  Here’s what it looked like out there this morning.

While no other ski area has seen snow, it’s looking good just about everywhere.   As I already mentioned, it’s going to remain cold today but it should be a bluebird day.  All of the cams outside of West Virginia are showing sunny skies already.  App Ski Mountain just posted a nice pic on their Facebook page.

One thing I am noticing though is the distinct lack of bodies on the slopes.  I know it’s only 9:08am on a Thursday, but it’s still pretty empty out there.  As we all know, it’s usually not a lack of snow that causes closures, it’s the lack of skier traffic.

A couple notables this morning…I already mentioned that Timberline posted on their website that this upcoming weekend is their final one of the season.  Wintergreen is also leaning towards doing the same.  They are saying that they MIGHT re-open Saturday March 25th, but they are strongly hinting that this weekend will be it.  They were originally supposed to close this past weekend, but the snow and cold allowed them to keep going which is awesome.

Appalachian Ski Mountain is offering a pretty sweet deal to season pass holders at any other resort in the region.

Appalachian is also offering a special for any passholder of any Southeast ski area. Present your season pass to any Southeast resort at our Main Office, and ski or ride any day or night for the rest of the season for only $20!

App’s closing date is next Sunday and they should make that no problem, so you have a week and a half to take advantage of this deal!

Check back tomorrow as we’ll take a look at the weekend weather and what not.  Right now it looks like Sunday is the choice pick of the weekend as a little bit of rain is in store for Friday night and Saturday.

I’ll also do a recap of who is open and who is closing after this weekend.  I’m hesitant to speculate as I’ve already been wrong a couple of times in the past few weeks.  I’ll try my best though.

Previous Post
Stella Turned Back the Clock from March to January
Next Post
We’ll Have Eleven Open Ski Areas This Weekend…Not Bad for March!